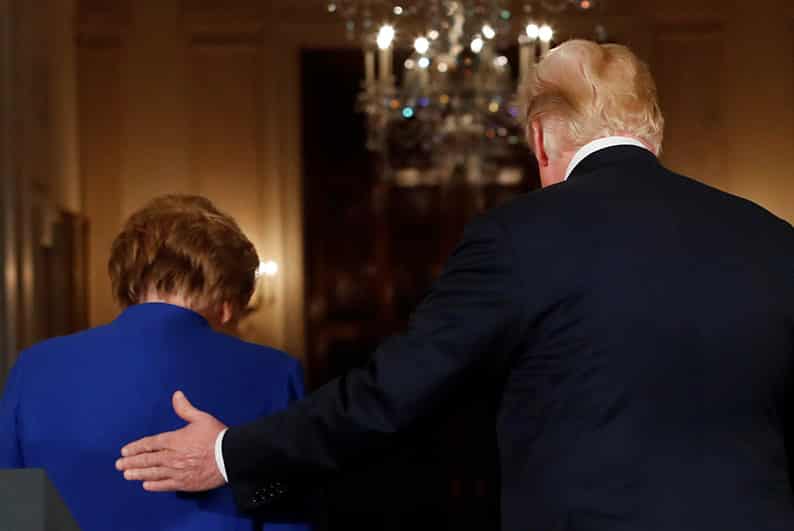 File photo: US President Donald Trump and Germany's Chancellor Angela Merkel depart after a joint news conference in the East Room of the White House in Washington

Germany’s Angela Merkel faces a delicate diplomatic balancing act when she travels to China this week on a visit clouded by U.S. President Donald Trump’s trade threats and his decision to pull out of the Iran nuclear deal.

Germany and China, two exporting nations that run large trade surpluses with the United States, have found themselves in Trump’s firing line and are scrambling to preserve the rules-based multilateral order on which their prosperity rests.

But while Merkel’s hosts may be keen to send a message of total Chinese-German solidarity in Washington’s direction, she will want to avoid the appearance of siding too openly with Beijing in a confrontation with Berlin’s longtime ally.

In reality, Merkel’s government shares many of the Trump administration’s concerns about Chinese business practices. And so, she will be striving to send a dual message, combining a strong defence of multilateralism with a critical push for Beijing to play fair on trade and investment.

“Trump’s policies have turned this fairly routine visit to mark the start of the new German government into one of special importance,” said Sebastian Heilmann, director of MERICS, a Berlin-based think tank on China.

A German diplomat described the trip as a “high-wire act” for the chancellor, who travelled to Washington last month to lobby Trump to stay in the Iran nuclear deal, only to see him withdraw days later and threaten sanctions against European firms that continue to respect it.

The trip will be Merkel’s eleventh to China since becoming chancellor in 2005. Accompanied by an industry delegation of roughly 20 German executives, she will hold a news conference with Chinese premier Li Keqiang on Thursday before attending a dinner hosted by President Xi Jinping.

On Friday, she will travel to Shenzhen for talks with local Chinese officials, before attending the opening of an “innovation hub” hosted by the German chamber of commerce and industry, visiting a Siemens plant and a Chinese start-up.

In Germany, there is growing concern about the role of the Chinese state in the economy under Xi, from a new cyber security law, to the influence of Chinese communist party officials in joint ventures and the “Made in China 2025” initiative which some see as a threat to German manufacturing dominance.

Still, with German companies continuing to do a booming business in China, Merkel’s government faces internal pressure not to adopt a confrontational stance, as Trump has done by threatening China with billions of dollars in trade tariffs.

“Despite the troubles, business is very good for German companies in China,” said Hubert Lienhard, chairman of the Asia-Pacific Committee of German Business. “A lot of companies make a significant portion of their revenues there. China is a market that we really need.”

Thorsten Benner, director of the Global Public Policy Institute in Berlin, said the German government’s preference would be to work with the U.S. administration to wring concessions from Beijing on trade and investment.

But because a common approach appears impossible under Trump, he said Germany felt a need to “hedge against the worst excesses” of the American president.

On a range of important global issues, from climate change and free trade to the Iran deal, Berlin now has more in common with Beijing than it does with Washington.

“At a time when the Trump administration does not appear interested in the transatlantic partnership, Europe must look after its own interests,” said Michael Schaefer, a former German ambassador to China who is chairman of the BMW Foundation.

“Part of this is finding partners that it can work with to defend these interests. China can play a significant role here in a lot of areas.”

Sixty-one per cent of Nicosians think their city is clean