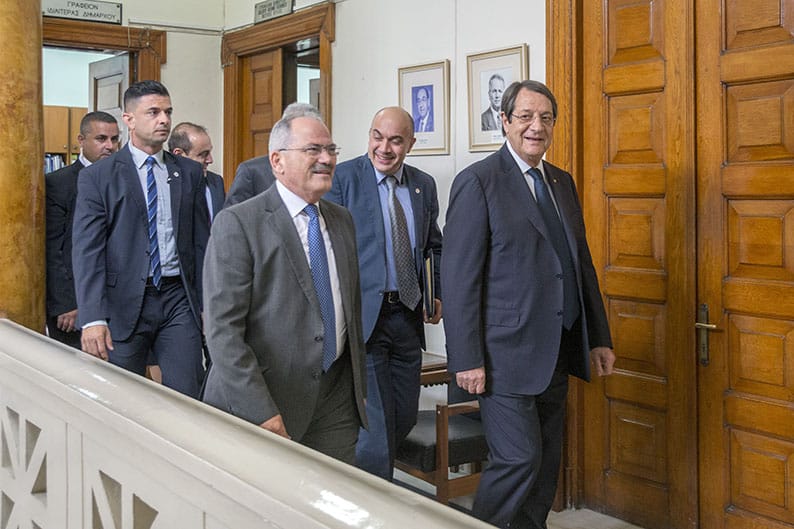 President Nicos Anastasiades on Tuesday bemoaned delays in implementing local authority projects during a broad meeting in Limassol to evaluate the progress on projects he had previously announced.

But he also lauded the privatisation of Limassol port and the increased revenues it has brought in, plus the upcoming ground-breaking for the casino resort on June 8.

One of the most important announcements he made was that the government was also about to sign an agreement with the German Oncology Centre in Ayios Athanasios, which opened late last year, for the provision of services to cancer patients from Limassol and Paphos. Currently they must travel to Nicosia for radiotherapy. There are around 3,500 new cancer cases every year of which half need radiotherapy.

About 40 per cent of these patients live in Limassol and Paphos.

Unfinished projects include construction and upgrading of a number of schools and kindergartens, roads and central squares in villages, including Troodos Square, parks, improvements to water supply, sports stadiums and football pitches, and the creation of more citizens service centres.

Anastasiades said Tuesday’s meeting was aimed at jointly examining progress in development and infrastructure projects announced during his two previous visits to Limassol, and to try and have the necessary monitoring in place to achieve stated deadlines.

Attending the meeting, in addition to Limassol mayor and other municipal representatives and officials from the district, were the ministers of health, interior, justice, transport, agriculture and the deputy minister of shipping.

“This is a meeting I think is imperative because we all find it unsettling that the state suffers from a bureaucratic structure with multiple disparities or overlaps of powers, resulting in delays even in projects whose implementation has been approved or announced,” he said.

“And I leave aside the unacceptable phenomenon observed lately by a number of contractors who do not honour their contractual obligations, thus cancelling the construction contract and re-bidding, creating further significant delays,” the president added.

He said the state was determined, “always in cooperation and in a climate of conciliation” to bring about real, meaningful and decisive reforms to reduce bureaucracy, modernise the state, improve the quality of life of the public and accelerate, “on the basis of the steadily growing economy”, the implementation of the projects it was announcing.

Anastasiades spoke specifically about the privatisation of Limassol port, from which he said there had been an increase in revenue since it was handed over to private interests in January 2017.

At the same time, he acknowledged the investments made by private partners in the port amounting to some €113m, of which €36m would be invested in 2018.

“These projects not only secure the port’s prospects for the coming decades but also significantly enhance the efforts to promote Cyprus as a modern and important regional centre of tourism, shipping and trade in the Eastern Mediterranean,” he said.

Anastasiades added that the appointment of a deputy minister for shipping as well as tax incentives had prompted a number of shipping companies to relocate to Cyprus. In addition, 52 new ships had been registered in the first five months of 2018, he said.

He also referred to the new casino resort that would be created in Limassol and the ground-breaking ceremony that would be held on June 8. Anastasiades said the casino resort was expected to attract around 300,000 extra tourists a year to bring in revenue of some €700m, creating 6,500 jobs.

By the end of June it was also expected to start operating the temporary casino that will be created in Limassol until the resort is completed. Construction works for this are at an advanced stage, he added.

Concerning the new stadium for Limassol, he referred to various problems and the resulting delay and said it was an imperative project for the city but he said he was optimistic that a solution could be found without violating EU regulations that prohibit state aid. Anastasiades said the project was initially budgeted at €17m but due to the delays was now estimated to cost €31.5m.

Within days, he added a tender for the road network linking the stadium with the Limassol-Paphos highway would be awarded and the cost of the project, which will amount to about €4m would be paid by the state.

Four new projects announced by Anastasiades included the construction of a bypass road from Pelendri to Potamitissa, costing €2.56m. After overcoming legal impediments, the project started in March 2018 and will be completed in March 2019.

The fourth new project will be the second phase of the rebuilding of the traditional centre of Apesia village at a cost of €1.5 million. This project is expected to start in November 2018 and be completed in December 2020.

Theatre takes us around the world