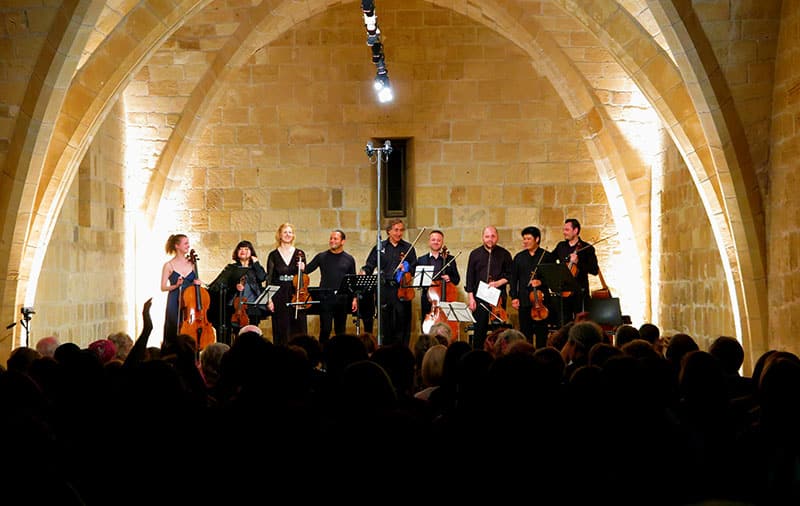 This is the one event of the year that definitively proves we underestimate our tourists. Admit it, go on. We’re all a little guilty of assuming our summer visitors are merely here for the sun-soaked party season. But we’re wrong. Because a significant percentage of our yearly guests visit Cyprus for something entirely different: culture. And if there’s one event that proves our tourist trade relies on more than just sun, sea and sex, it’s this. The International Pharos Chamber Music Festival.

It’s a stance the Cyprus Tourism Organisation would agree with. According to the CTO the one thing that is an intrinsic part of the local touristic experience is culture, with visitors to the island “always including arts events and galleries, festivals, museums and the like as an important part of their visit,” a spokesman said. A study in 2013 showed that 58.6 per cent of visitors said cultural tourism was an important criterion for choosing Cyprus, although only one in two had indeed gained experiences of cultural tourism.

Running from May 31 to June 6 this year, the Pharos festival is a meeting place for both locals and visitors; an event which lures any number of cultured, educated tourists to Cyprus with its world-class musicians and seamless performances. Over the years, it’s attracted more than 25,000 visitors, tourists from countries as far afield as Japan and Australia who look on the festival as the highlight of their cultural calendar. In part, it’s because practically no other festival of a similar calibre is so affordable: where else in the world could you listen to pianists Yuja Wang or Sergei Babayan for a mere €15? But it’s also the locations: Carnegie Hall is all very well, but you haven’t lived until you’ve heard the musicians perform a Vivaldi Concerto in an ancient olive grove…

A world-class, open-air concert venue, which plays host to relaxed and informal events and creates intimacy between artists and the audience, the Olive Grove in Delikipos is one of the festival’s two gorgeous locations. Surrounded by forest, dotted with pools of water, and illuminated by sparkling lights, the venue is perfect for sprawling on a blanket under a tree with a glass of wine while taking in the strains of a chamber orchestra. Then there’s the Royal Manor House in Kouklia, one of the finest surviving monuments of Frankish architecture on the island and a UNESCO World Heritage site. Together, these two venues make for “a unique concert experience,” says Yvonne Georgiadou, the Pharos Arts Foundation Artistic Director. “There is a mystifying, uplifting energy at both locations that almost defies description. Not only does the festival take advantage of the ambience and history of the venues, it also delivers performances at the highest level. And, as for our guests, well, we don’t even regard these visitors as tourists anymore because they have grown to be regular audience members of our festival year after year. But this is what cultural tourism is about – focused, concentrated and highly beneficial to the local community.”

Of course, the festival also attracts a large local audience: both music-lovers and – most intriguingly – those who have no particular affinity for classical music, but who pull out all the stops to make sure they’re in attendance for at least one of the concerts. The reason? “Nothing is coincidental,” says Yvonne. “Any non-mainstream music genre may seem initially intimidating; it takes time to cultivate the audience’s aural perception – but we’ve been working systematically toward that direction for years. People tend to be hesitant at first, but once they enjoy a good experience, one that is both captivating and rewarding, they will revisit and gradually ask for more. In the end, they don’t just tolerate another ‘classical music’ gig, but realise that they have discovered a new world, one they truly cherish.”

However, the Chamber Music Festival isn’t just about luring tourists to the island, or even developing a local appreciation for classical music: it’s also about giving back. To this end, the non-profit organisation has maintained a strong tradition of community service over the years, which includes the comprehensive educational activities programme which has been running in conjunction with the festival for 12 years now…

“The first ever educational project took place in April 2006,” Yvonne reveals. “But, to be honest, it was an experience that left me quite upset: I found the students were tremendously untamed and disrespectful of what was being offered; some laughed at the artists, others didn’t pay any attention at all to what was being communicated. But you have to find ways to reach the youth, and so this is what we’ve done over the years: working around the structure of the programme by keeping the students in small activity groups and eliminating any kind of formality in the training process, creating a feeling of liberation and inspiration in the classes.”
These days, Yvonne explains, the programme is seen in a totally different light: the 75,000 local students and young professionals who have benefitted from the free educational concerts, workshops, lectures, master-classes and open consultations over the years are now engaged and agreeable, viewing attendance as a unique privilege.

“Our aim is not to turn all these students into professional musicians but to give them the opportunity to expand their sound worlds and communication skills,” says Yvonne. “Pharos has now been around for a generation, and has benefitted students, young professionals and music-lovers the world over. We’ve organised hundreds of concerts with the most prominent musicians in the world, made music accessible to the general public, changed perceptions and opened the way to true cultural advancement. It’s not always been an easy journey, and has required a lot of sacrifices to get where we are now, but that’s not going to stop us…”

With plans in the works to expand on the festival venue at The Olive Grove, Delikipos, Pharos is moving full steam ahead. An innovative Centre for Art, Culture and Dialogue which will provide space for music and the visual arts, as well as sanctuary for artists, writers, composers, musicians and thinkers from all disciplines and backgrounds, is planned – a fitting testament to the charitable ethos of the Pharos Foundation. “In fact, I can’t imagine a better way to salute our future ventures than the debut of the brilliant Dakapp Chamber Orchestra and the exceptional world-class soloists of the Pharos Chamber Music Festival,” Yvonne concludes. “2018 is the festival’s twentieth anniversary. We’re looking forward to our many visitors over the 20 to come!”

The 18th International Pharos Chamber Music Festival
From May 31 to June 6. For bookings and more information on the full programme of events, call 22 663 871 (Mon-Fri, 10am – 3pm) or visit www.pharosartsfoundation.org. All concerts start at 8.30pm. Tickets cost €15 / €10 (Concessions, Members of the Pharos Arts Foundation) and are available both online and from Kyriakou Fullpage Bookshops, Paphos (26 822850)

Sporting events to get you outside