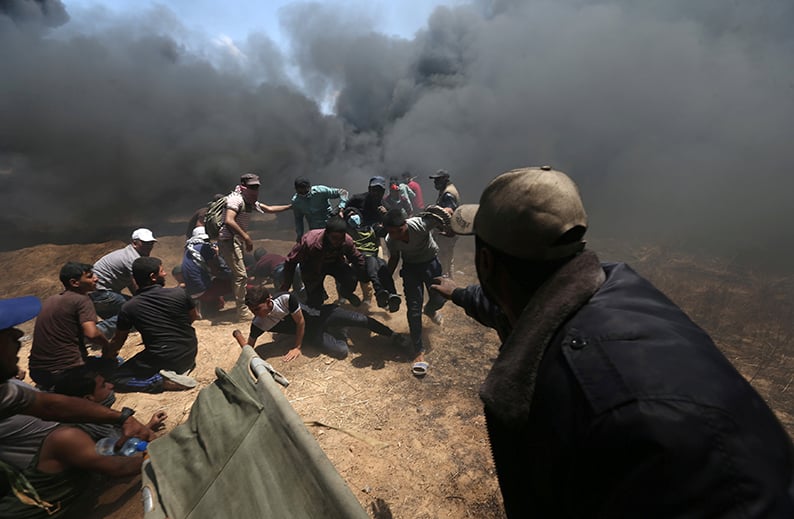 Wounded Palestinian demonstrator is evacuated as others take cover from Israeli fire and tear gas during a protest against U.S. embassy move to Jerusalem and ahead of the 70th anniversary of Nakba, at the Israel-Gaza border in the southern Gaza Strip

President Tayyip Erdogan has hinted that Turkey might consider imposing a ban on imports of some Israeli goods over the killing of Palestinian protesters by Israeli forces on the Gaza border, media reported on Tuesday.

Erdogan, who is campaigning for re-election in June, last week hosted Muslim leaders who condemned the events in Gaza and the opening of the United States embassy in Jerusalem.

Speaking to reporters on a return flight from Bosnia on Sunday, Erdogan said the 57-member Organisation of Islamic Cooperation (OIC) had recommended that a boycott be imposed on Israeli goods.

“I hope that OIC member countries implement a boycott decision in line with the recommendation. Consequently, no product should be brought from there any more. Naturally we will assess this situation in the same way,” Hurriyet newspaper reported Erdogan as saying.

A declaration by the OIC on Friday repeated a call for countries to ban “products of the illegal Israeli settlements from entering their markets”, referring to goods produced in the Israeli-occupied West Bank and Golan Heights.

It did not seek a ban on all Israeli goods.

The declaration also called for “economic restrictions (on) countries, officials, parliaments, companies or individuals” who followed the United States and moved their embassies to Jerusalem.

Erdogan said last week that Trump’s move had emboldened Israel to put down the protests at the border with Gaza with excessive force, likening the actions of Israeli forces to Nazi Germany’s treatment of Jews in World War Two, when millions were killed in concentration camps.

The violence in Gaza, where more than 60 Palestinians were killed on May 14 led to Turkey and Israel expelling each other’s senior diplomats. Erdogan also traded barbs on Twitter with Israeli Prime Minister Benjamin Netanyahu.

Israel was the 10th-largest market for Turkish exports in 2017, buying some $3.4 billion of goods, according to IMF statistics.

Data from Turkey’s statistics institute showed that trade volume between the two was at $4.9 billion in 2017. Turkey, which has a trade surplus with Israel, imports plastics and mineral oils among other goods from there.

Erdogan said Turkey would reconsider its ties with Israel.

“We will put our relations on the table, in particular our economic and trade relations. We have an election ahead of us. After the election we will take our steps in this direction,” Erdogan was quoted as saying.

From classical to pop in Paphos