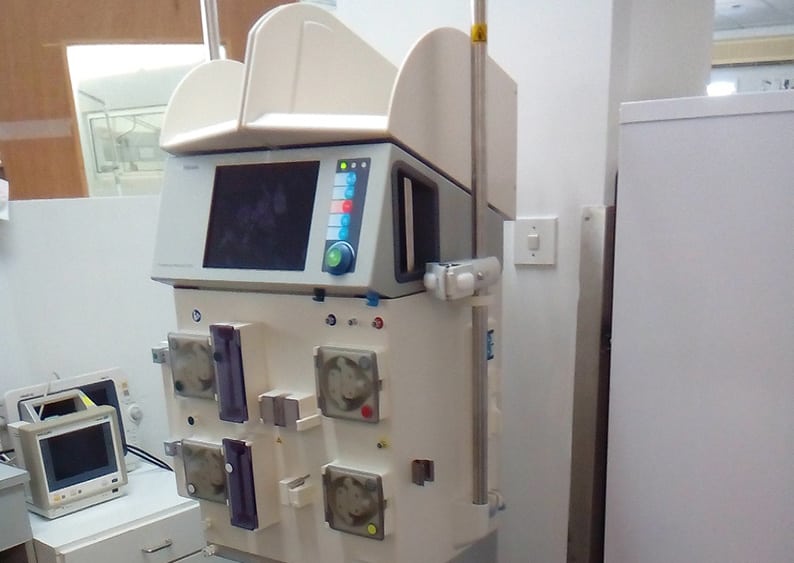 THE renal unit at Paphos general hospital has taken delivery of a state of the art dialysis machine, made possible by a donation from a local charity.

According to Graham Brown, the chairman of the Paphos Kidney Association, the new machine- a ‘multifiltrate acute therapy system’, has been installed in Paphos General Hospital’s ICU (intensive care unit) and will be used for emergencies and life-threatening situations.

“We are all really chuffed, the nurses, the doctors and the kidney association. We raised the money for it and it will also treat patients for food poisoning, multi- organ failure, plasma treatment as well as dialysis,” he told the Cyprus Mail.

The new machine, which cost in excess of €30,000, is of particular use in treating patients with low blood pressure and nurses will need to be specially trained in how to operate the machine, and will undergo training in two weeks’ time he said.

According to doctors at the unit, there are currently 75 patients receiving regular dialysis with many others waiting for treatment. Regular dialysis treatments takes around five hours and until now, patients with low blood pressure couldn’t use the machines in Paphos, as they need a far gentler treatment which takes much longer, and had to travel to Nicosia to use the machine there.

The new machine has been long awaited, as the charity had to wait for many months to gain permission to donate the machine to the unit from the government. It then took a further three months to make, as it’s such a specialised item.

“It was made in Germany; when the doctors asked us if we could get them this machine, we said yes and raised the money,” he said.

Brown has hereditary polycystic kidney disease and receives regular dialysis treatment at the unit to keep him alive. Each of the hemodiafiltration (HDF) units which the charity has donated, comes with a €25,000 price tag. If a patient doesn’t receive dialysis when needed, they will die within five days.

His treatments take around four to five hours and he needs them three times a week to keep him alive. According to doctors, it costs around €50,000 to treat each patient a year.

The unit has given a shopping list of €6,000 for this month to Brown, which includes a new chair/ scale to weigh patients in and out, an operating table with adjustable height, oxygen metres, blood pressure monitors and some other items, he said.

“The association will cover these costs and donate the items, as it has done with many other pieces of equipment and necessities over the years”.

In 2017 they raised over €73,000 from all sorts of events including: quizzes, raffles, concerts and donations.