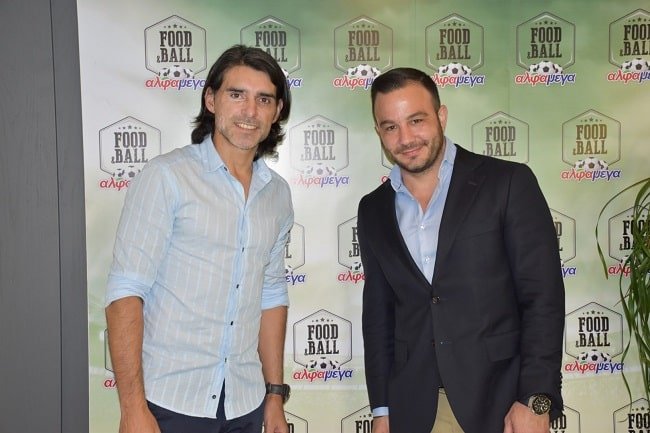 In view of the forthcoming World Cup, Alphamega hypermarkets will soon be launching their new brand ambassador campaign with the internationally renowned Argentine defender, Roberto Ayala. At a press conference held on Monday May 21 the veteran national Argentina footballer was the honorary guest. He expressed his joy at this collaboration to be held in the framework of the ‘Food & Ball’ campaign.

Roberto Ayala came to Cyprus to shoot the campaign’s TV advertising, and his fans will have the opportunity to see him, take a photo with him and get an autograph on May 24 and 25 at the hypermarkets in Engomi and the central shop in Limassol where he will be present.

During this year’s World Cup, which will be held in Russia in June, Alphamega hypermarkets will offer the audience special offers for products. These offers will be published in brochures at all supermarket stores.

Exclusively for Alphamega hypermarkets and for the Food & Ball campaign, Flipper Ball was built, a game that will be moved around selected supermarkets so that young and old can play and compete. Their favourite footballers, members of the ‘Goal in Life’ association, who will visit the supermarkets will play with them. The winners of the game will win footballs and T-shirts with the campaign logo. Even more surprises will be waiting for those who are in the hypermarkets during the World Cup!

Alphamega hypermarket marketing director Giorgos Theodotou said he was thrilled with the new advertising campaign, stressing that the collaboration with Roberto Ayala is a particularly happy venture for the hypermarkets.

“It is our honour that a player of such a magnitude came to Cyprus to participate in our new television advertising. We hope he enjoys it as much as we do and that he will visit our country again,” he said.