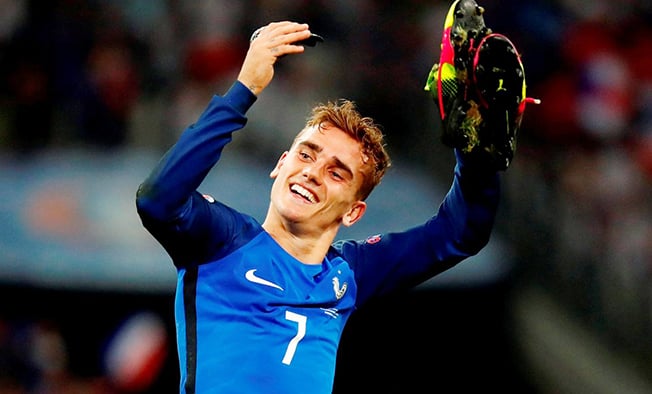 France built their 1998 World Cup-winning squad around a rock-solid defence but 20 years on they could do just the opposite, with their dazzling array of creative, attacking talent ready to make all the difference at the 2018 edition.

Such is Les Bleus’ firepower up front that manager Didier Deschamps even has the luxury of not missing Real Madrid striker Karim Benzema, who has not been selected ever since being involved in a sex-tape blackmail scandal in 2015.

France can not only call on Paris St Germain prodigy Kylian Mbappe but also Atletico Madrid’s Antoine Griezmann and Olympique de Marseille’s Dimitri Payet, the duo who shone during Euro 2016 on home soil before the hosts lost in the final.

Payet flew under the radar for most of this season but recent impressive performances earned him a place in the 23-man squad.

In sharp contrast, the back four have been a recurrent problem for Deschamps.

Neither Samuel Umtiti nor Raphael Varane have been convincing this season as France, while twice using them as their centre back pairing in their last three matches, have conceded six goals.

To add to the concerns, centre back Laurent Koscielny has been ruled out of the tournament injured, limiting the coach’s options.

There are also question marks over another key player, Paul Pogba, following a see-saw season at Manchester United, where manager Jose Mourinho has been starting him only sporadically.

Yet France have weapons which should see them at the very least progress from Group C, where they face Australia, Denmark and Peru with a potential quarter-final against Spain or European champions Portugal on the horizon.

For while Pogba has struggled, holding midfielder Blaise Matuidi has in one season become a cornerstone for Juventus while Corentin Tolisso has also dramatically improved at Bayern Munich.

Indeed, Tolisso could end up paired with the Juve engine instead of Pogba, or even Ngolo Kante.

Up front, Griezmann is a very likely starter after another prolific campaign, his pace and delicate turns able to unsettle any defence, while Olivier Giroud as number nine also gives France an aerial threat.

The unsinkable Chelsea striker has scored with more headers than anyone in Europe’s top five leagues over the past three seasons.

The last attacking spot should be filled by the exciting PSG teenager Mbappe, who has steadily improved as he has sought to live up to his billing as the world’s second most expensive player since moving from Monaco.

Turkish national and accomplice remanded for five days in Paphos