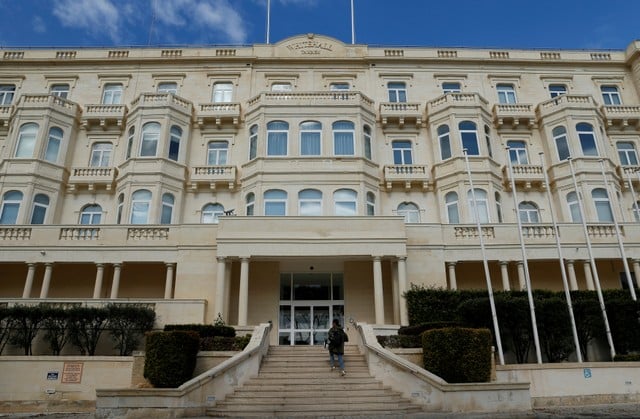 Whitehall Mansions, within which the offices of Pilatus Bank are situated

European Union governments are considering new rules to counter money laundering after alleged wrongdoing at two banks in smaller states of the bloc flagged risks to financial stability, according to officials and an EU document.

The possible move follows the collapse of Latvian bank ABLV in February and the freezing of operations at Malta’s Pilatus Bank in March after allegations of money laundering.

In both cases, the alleged wrongdoing was exposed by U.S. authorities and not by EU watchdogs — a situation that the head of eurozone banking supervision, Daniele Nouy, said was “very embarrassing” as it showed weaknesses in European oversight.

European finance ministers discussed how to strengthen the EU oversight at an informal meeting in April and are likely to address the topic again in regular monthly meetings later on Thursday and on Friday, as part of discussions on banking rules reform, three EU officials told Reuters. “EU states agree that the existing anti-money laundering provisions are not sufficient,” one of the officials said, reporting discussions held by EU states’ envoys last week to prepare this week’s meeting of finance ministers.

Banks are free to move capital across EU states and beyond, but checks on money laundering and other financial crimes remain largely a national competence — a mismatch that EU authorities say could hamper controls and create financial stability risks.

The recent banking troubles in smaller member states have strengthened the arm of those who want to enhance EU oversight powers, overcoming long-standing resistance in some capitals to relinquish national competence on this.

Some states are calling for a new body to be set up to counter money laundering at EU level, while others favour the idea of giving more power to one of the existing EU financial regulators, like the European Banking Authority.

A less bold option would entail a tighter application of existing anti-money laundering rules, which have been overhauled several times in past years, with the latest reform due to be applied by 2020, officials said.

One of the options on the table could be agreed upon before an EU leaders’ summit in December, officials said.

The talks follow a letter sent by the EU Commission to the bloc’s financial regulators in which the EU executive urged better cooperation against money laundering to avoid “serious detrimental effects on the financial soundness of individual institutions,” the document seen by Reuters said.

EBA and the European Central Bank declined to comment on the letter.

The Commission urged that EU powers to revoke banking licences in case of money laundering concerns be clarified.

EU rules give the ECB the role of granting and withdrawing banking licences in the eurozone, but do not give Frankfurt a clear mandate to prevent money laundering, which remains the job of domestic supervisors.

These limits were evident in the Pilatus case. The Maltese bank had for long been a concern for eurozone supervisors, an ECB official told Reuters. But it maintained its licence.

Maltese authorities froze the bank’s accounts and assets only after Pilatus’ Iranian chairman was arrested in the United States under charges of money laundering and bank fraud.