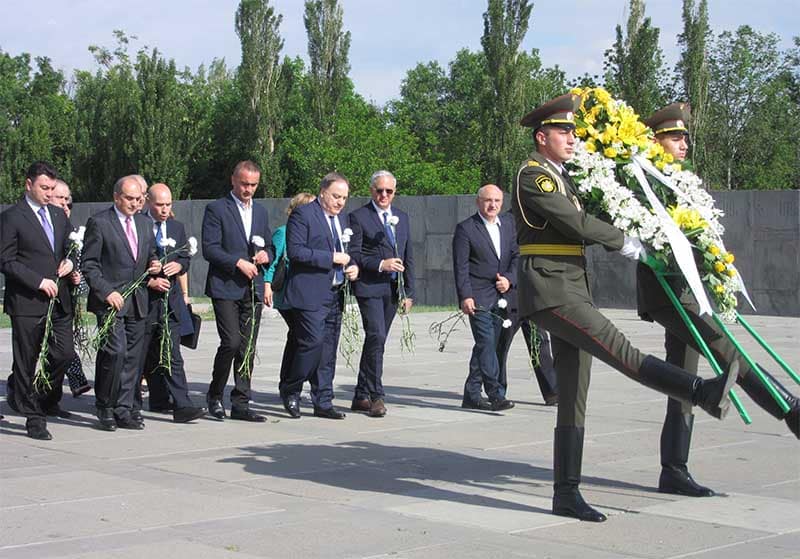 House President Demetris Syllouris wrapped up his official visit to Armenia with a farewell meeting with President of the Armenian National Assembly Ara Babloyan, who reiterated that efforts would be intensified to promote cooperation between the two countries.

Babloyan said Syllouris’ speech at the National Assembly impressed the Armenian MPs. In his speech Syllouris expressed his feelings about the real problems the two peoples have to address, noting that justice can prevail in the end through peaceful means and talks.

The Armenian official said it was important to promote cooperation in issues of mutual interest to produce tangible results.

Syllouris briefed Babloyan about his meeting with Armenian Prime Minister Nikol Pashinyan, with whom he raised the issue of the Melkonian school in Nicosia, noting that it would not be made available for any commercial activities but a solution would be found to the satisfaction of the Armenian bishopric and the Armenian diaspora and community, with Melkonian becoming a centre for education, technology, and research for the Armenian diaspora.

Babloyan said many Armenians were against selling Melkonian and expressed certainty that with patience a solution would be found.

In separate statements, Syllouris spoke about his vision to turn Cyprus into a “smart country”, noting that the House of Representatives could act as a catalyst so that the state, universities and the private sector cooperate to bring about tangible results in research and technology.

Before wrapping up the visit, Syllouris and the parliamentary delegation visited historical, commercial and technological sites.

The delegation comprised MPs Nicos Tornaritis, Georgios Georgiou, Christos Orphanides and George Perdikis, as well as Representative of the Armenian Religious Group in the House Vartkes Mahtesian, and Rector of the University of Cyprus Constantinos Christofides.

Tornaritis said the visit was very successful, noting that there were many fields in which relations could be further strengthened, such as tourism, air transport, education and technology.

Georgiou said Armenia was fighting its own struggle to survive in the land of its ancestors, and expressed solidarity and support to this effort, adding that it was possible to create an arc of cooperation and friendship with the purpose of peace and the solution of the problems of both Armenia and Cyprus.

Orphanides said the official visit set a decisive course in bilateral relations, noting that Cyprus and Armenia could strengthen cooperation in all sectors.

Christofides said possibilities for cooperation between the Universities of Cyprus and Yerevan were explored.

Three fined over €11,000 for trapping songbirds

Cyprus not affected by Arcadia collapse