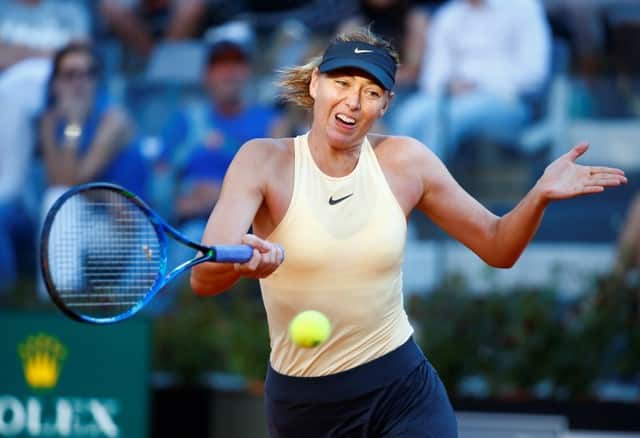 Denied a wildcard by Roland Garros organisers last year on her return from a 15-month doping ban, the Russian was dogged by injury and controversy as she tried to get her career back on track

When Maria Sharapova last played the French Open in 2015, she did so as defending champion.

Denied a wildcard by Roland Garros organisers last year on her return from a 15-month doping ban, the Russian was dogged by injury and controversy as she tried to get her career back on track.

Now 31, it would have been understandable had the five-times grand slam winner hung up her rackets to focus on her ever expanding business empire.

Not Sharapova, one of the game’s toughest competitors.

“That’s why I still continue to do this, because I have that passion of figuring things out and getting it done, whether it’s a tough day, or whether it’s a great day,” Sharapova said in a phone interview earlier this year.

Although Sharapova was the world’s top-paid female athlete for more than a decade and has earned close to $300 million on and off the court according to FORBES, nothing comes close to competing for the sport’s biggest prizes.

“You are very much in the moment,” said Sharapova, a three-times finalist in Paris. “Your team just hands you over, literally on to the stage, onto your universe for the next hour, hour-and-a-half, two or three, and you have to find a way to deliver.

Having ended 2017 outside the top 50, Sharapova endured one of the worst periods of her career as she lost four straight matches.

In March, she ended a four-year spell with Dutchman Sven Groeneveld and brought back her former coach from Sweden, Thomas Hogstedt, with whom she won her first French Open title in 2012 as she completed the career grand slam.

Now, after strong performances in Madrid and Rome this month, Sharapova is back among the seeds and beginning to believe that she can win the title for a third time.

Finally fully fit, Sharapova reached the quarter-finals in Madrid and beat reigning French Open champion Jelena Ostapenko to reach the semi-finals in Rome, a huge boost of confidence as she returns to the scene of her most successful grand slam.

After losing a close three-set match to world number one Simona Halep in Rome, Sharapova called her progress “a step in the right direction”.

“After losing those matches, you still have to put yourself on the line and show up and deliver, and do it with authority,” she told reporters at Rome’s Foro Italico.

“What I’m most proud of is (that) I had a lot of opportunities in the last few weeks in Madrid and here to just back down, to let little things bother me. But I got through them.

“I set up real good situations for myself; a lot of court time and match play. All good things that I wanted.”

Ageing defence and off-form players are a worry for Portugal