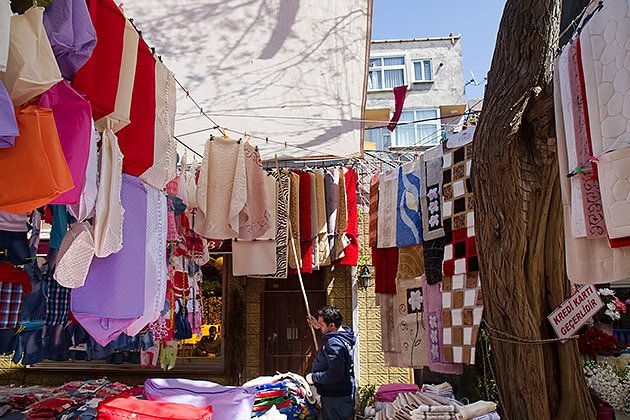 Running a market stall in Istanbul’s working class Fatih district, Ozgur Kamis struggles to make a living as the cost of his stock rises day by day – and he reckons it will only get worse after elections in June.

Kamis, who sells trousers and headscarves in the Carsamba Market, has found himself on the wrong end of a global currency selloff sparked by Turkish President Tayyip Erdogan. Five-dollar tracksuit bottoms that cost 23 lira yesterday cost him 24.5 lira today.

“This is a result of the country’s wrong policy determined by the president,” he said. “And these are the good days. Worse things will come after the election.”

Turkey’s currency has dropped some 20 percent so far this year as international investors have dumped it on deepening concerns about Erdogan’s drive for lower interest rates despite inflationary pressures.

The sell-off accelerated last week after he said he would take greater control of monetary policy after the June 24 presidential and parliamentary ballots.

The response from global investors has been unequivocal, driving the lira to a series of record lows.

But Erdogan may face more pressing problems at home from the reaction of voters like Kamis – particularly the pious, working class Turks who have long been his core constituency.

The most popular, and divisive politician in modern Turkish history, Erdogan has overseen tremendous economic growth in his 15 years in power but, more recently, also a deepening crackdown. The government says its security measures are necessary given threats in the aftermath of a failed coup in 2016.

On Wednesday the central bank stepped in with an emergency rate hike, though some market players doubted it would be enough to calm the lira.

With the economy having probably crested, Erdogan last month brought the election forward by more than a year.

“If the election were to be held in the middle of an economic crisis – say one year from now – then of course the situation would have looked different,” said Halil Karaveli, editor of the Turkey Analyst, a policy journal.

“My gut feeling is that most voters are going to stick with Erdogan… (He) has governed this country for 15 years very successfully, from their point of view.”

‘NO ONE CAN KNOCK HIM’

A survey by pollsters MAK, viewed as sympathetic to the ruling party, showed on Wednesday that the parliamentary race is too close to call, with Erdogan’s AK Party and its nationalist allies winning exactly 50.0 percent.

In the presidential vote, it put Erdogan at 51.4 percent.

Erdogan could face a credible challenge if the presidential vote went to a second round in July and his opponents rallied around the other remaining candidate – likely to be either Muharrem Ince, from the secular opposition, or former interior minister Meral Aksener.

Still, there was no shortage of die-hard Erdogan supporters in Carsamba Market, some echoing the government’s line that Turkey’s currency was being targeted by foreign powers.

“They’re raising the dollar to try to take down Tayyip. They can’t take him down. With God’s help, no one can knock him over,” said Ahmet, a salesman. Asked how he would he vote, he said: “AKP to the death”.

Some 42 percent of respondents in a recent MetroPOLL survey blamed the declining lira on “games by foreign forces on Turkey”. The next biggest response at 25 percent, was “the government’s wrong economic policies”.

Murat Gezici, who heads the Gezici polling firm, said the latest lira volatility and concerns about the economy could impact the AKP’s parliamentary showing.

He reckons that roughly a third of the AKP’s support comes from “disloyal voters” – centre-right voters who backed it because it delivered on economic issues.

“The economy has sunk,” said Kenan, another salesman in Carsamba. “I voted for the AKP previously, but no more.”

While Erdogan made some effort to placate investors late on Wednesday, talking about the need for fiscal discipline and stability, he also said the recent lira volatility did not reflect economic realities and he would not allow “global governance types” to ruin the country.

Hinting at a conspiracy, Deputy Prime Minister Bekir Bozdag – the government’s main spokesman – said a game was being played with the lira, but the Turkish people knew who was behind it.

In a deeply polarised country, such rhetoric resonates clearly among Erdogan’s strongest supporters.

“Half of the country hates him… the other half adores him, and thinks he can do nothing wrong,” said Soner Cagaptay, a fellow at the Washington Institute.

“The latter will therefore agree with him, if an economic meltdown happens, that this is driven by outsiders and the domestic opponents who want to undermine Erdogan.”