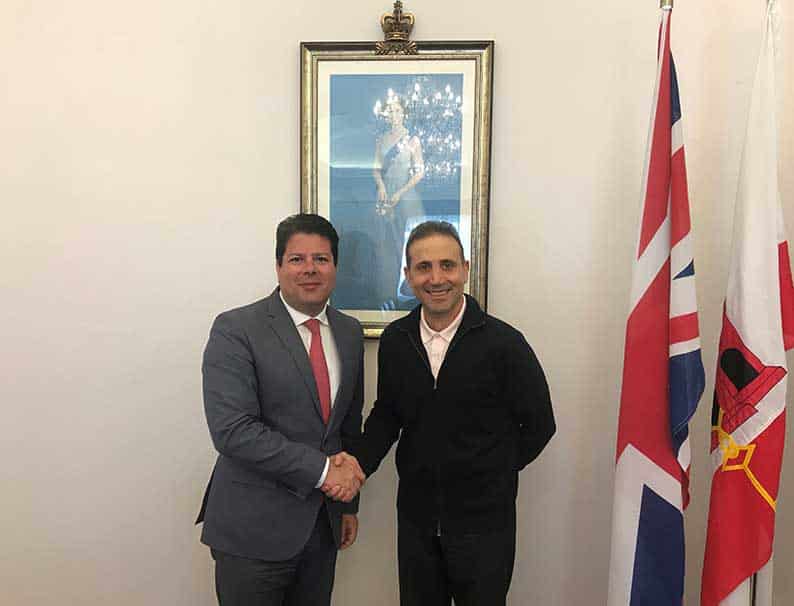 Nasos Ktorides, CEO of the Quantum Cable that will extend from Asia across the Mediterranean and on to the US, has received full support from the Prime Minister of Gibraltar for the “massive data highway” project to pass by the “Rock” where the Atlantic meets the Mediterranean.

During a two-day visit, at the invitation of the Gibraltar PM, CEO Ktorides had a meeting with the Chief Minister, the Hon. Fabian Picardo and they discussed future development plans of the fiber-optic high-speed data cable project.

“This project has my full support and we will explore how the two ends of the Mediterranean Sea can come closer through this project,” PM Picardo said after the meeting.

The Gibraltarian prime minister also expressed interest for the cable to land at Gibraltar and boost the state’s telecoms capacity.

Also present at the meetings was the Deputy Prime Minister, Dr Jose Garcia, and a separate meeting followed with Sir Joe Bossano, the Minister for Economic Development and Telecommunications where detailed discussions focused on establishing a data centre that would support the Quantum Cable at the two ends – Gibraltar and Cyprus.

Quantum Cable will connect Cyprus with Israel, Cyprus with Crete and Attica in Greece, and extend further to Italy, France and Bilbao, Spain reaching the 160 Tbps MAREA submarine cable stretching 6,600km across the Atlantic Ocean from Virginia Beach, Virginia, USA, to Bilbao, Spain.

The cable will have the capacity to handle up to 60 per cent of the world’s internet traffic at peak time or enough capacity to handle tens of millions high-definition video conference calls between Asia and Europe at the same time.

“As the project developer of the super-fast subsea data cable that has reached a mature stage and is proceeding according to schedule, we welcome discussions with the government of Gibraltar and all stakeholders along the route that would be interested to be involved in the Quantum Cable,” said Ktorides.

The entire cost of the project is estimated at US$200 million which will be undertaken by Quantum.

The Quantum Cable system will be in operation by October 2020.

“The Quantum Cable will have enough capacity to handle tens of millions of high-definition video conference calls between Asia and Europe at the same time, thus supporting the exponentially growing demand from Asia and Europe for high speed, secure connections for Cloud providers, Data centres and Online services,” Ktorides explained.

“Existing subsea cables in the Mediterranean currently have an average capacity of 3-4 Tbps, while the Quantum Cable will be up to 40 times faster,” he added.

The MAREA project was initiated by Facebook, Microsoft and TE SubCom, a TE Connectivity Ltd. company and an industry pioneer in undersea communications technology.

US senator introduces bill to end arms embargo on Cyprus