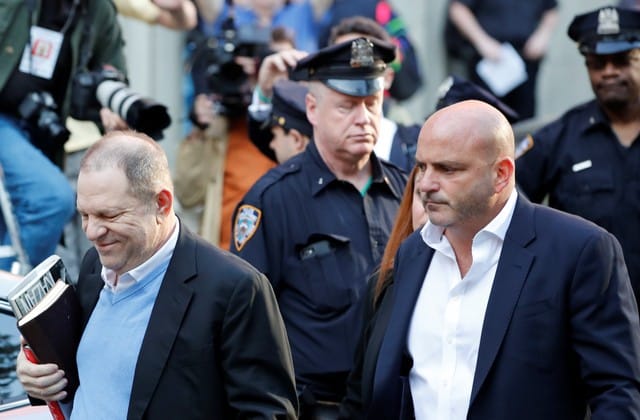 Film producer Harvey Weinstein surrendered to New York City police on Friday on charges of rape and sex abuse and was taken to court in handcuffs, months after he was toppled from Hollywood’s highest ranks by scores of women accusing him of misconduct.

More than 70 women have accused the co-founder of the Miramax film studio and Weinstein Co of sexual misconduct, including rape, with some allegations dating back decades.

He has denied having non-consensual sex with anyone.

The accusations, first reported by the New York Times and the New Yorker last year, gave rise to the #MeToo movement in which hundreds of women have publicly accused powerful men in business, government and entertainment of misconduct.

Weinstein, 66, is charged with rape, sexual misconduct, sex abuse and committing a criminal sex act against two women, the New York Police Department said in a statement, which did not identify the women.

Weinstein, wearing a dark jacket over a blue sweater and white open-collared shirt and dark jeans, gave a weak smile as police officers escorted him inside a lower Manhattan police station at about 7:25 am EDT (1125 GMT).

He carried thick books under his right arm, including what appeared to be biographies of the Broadway musical duo of Richard Rodgers and Oscar Hammerstein II, and Elia Kazan, the director of such classic Hollywood films as On the Waterfront and A Streetcar Named Desire.

He was due to appear later in the day for arraignment at a Manhattan courthouse where a judge is expected to release him on bail, according to media reports.

Weinstein‘s spokesman Juda Engelmayer and his lawyer Benjamin Brafman both declined to comment to Reuters on Thursday on the imminent charges.

The charges followed a months-long investigation that involved the Manhattan district attorney’s office.

One case involves allegations by Lucia Evans, a former aspiring actress who told the New Yorker that Weinstein forced her to give him oral sex in 2004, the Times reported.

Entertainment industry heavyweights have distanced themselves from Weinstein since the accusations became public. The board of the Weinstein Co fired him and the company filed for bankruptcy in March.

In 2017, he was expelled from the Academy of Motion Picture Arts and Sciences after racking up Oscars for a string of films that helped define independent cinema in the 1990s, including The Crying Game, Shakespeare in Love and Pulp Fiction.

Weinstein was a fixture in the most elite entertainment circles of Manhattan and Los Angeles until his accusers came forward. He sought treatment for sex addiction at a facility in Scottsdale, Arizona, the New York Times reported.

Brafman said in a May court filing that federal prosecutors in New York had opened a separate criminal investigation into the allegations.

Actress Ashley Judd last month sued Weinstein, saying he cost her a part in 1998 in the film The Lord of the Rings after she rejected his sexual advances, charges that Weinstein has denied.

Other actresses who have publicly accused Weinstein of sexual misconduct include Rose McGowan, Uma Thurman and Salma Hayek.