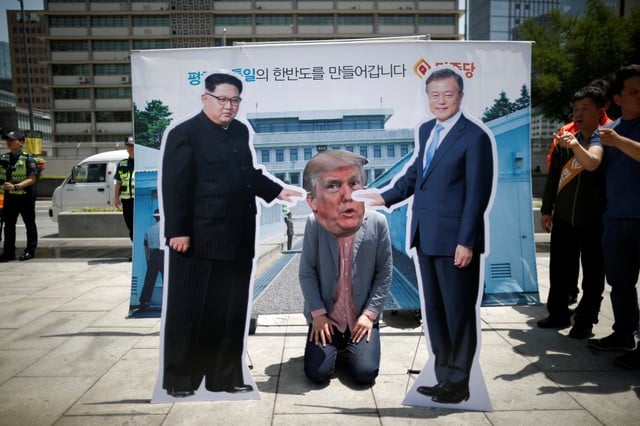 US President Donald Trump said on Friday said it was possible a planned summit with North Korea‘s leader Kim Jong Un could still take place on June 12 as originally planned, just a day after he cancelled the meeting citing Pyongyang’s “tremendous anger and open hostility.”

Trump welcomed the conciliatory statement from North Korea saying it remained open to talks after on Thursday he called off a summit with North Korea‘s autocratic leader, Kim Jong Un.

“It was a very nice statement they put out,” Trump said as he left the White House to deliver a commencement address at the US Naval Academy. “We’ll see what happens – it could even be the 12th.

“We’re talking to them now. They very much want to do it. We’d like to do it.”

Earlier on Twitter, Trump had noted “very good news to receive the warm and productive statement from North Korea.”

After decades of tension on the Korean peninsula and antagonism with the United States over its nuclear weapons program, Kim and Trump agreed to meet in what would be the first meeting between a serving U.S. president and a North Korean leader. The plan followed months of war threats and insults from both leaders.

Trump scrapped the meeting on Thursday after repeated threats by North Korea to pull out of the summit in Singapore over what it saw as confrontational remarks by US officials. Trump cited North Korean hostility in cancelling the summit.

In Pyongyang, North Korean Vice Foreign Minister Kim Kye Gwan said North Korea‘s recent criticisms of certain U.S. officials had been a reaction to unbridled American rhetoric and that the current antagonism showed “the urgent necessity” for the summit.

“His sudden and unilateral announcement to cancel the summit is something unexpected to us and we cannot but feel great regret for it,” Kim Kye Gwan said in a statement on state media.

He added that North Korea remained open to resolving issues with Washington “regardless of ways, at any time.”

North Korea had sharply criticised suggestions by Trump’s national security adviser, John Bolton, and Vice President Mike Pence that it could share the fate of Libya if it did not swiftly surrender its nuclear arsenal. Libyan leader Muammar Gaddafi was deposed and killed by NATO-backed militants after halting his nascent nuclear programme.

Kim Kye Gwan said North Korea appreciated Trump for having made the bold decision to work toward a summit.

“We even inwardly hoped that what is called ‘Trump formula’ would help clear both sides of their worries and comply with the requirements of our side and would be a wise way of substantial effect for settling the issue,” he said, without elaborating.