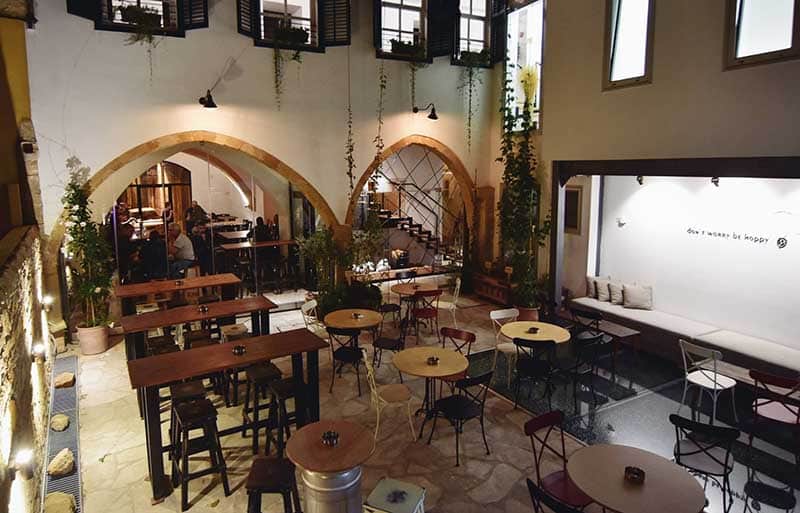 And now for something entirely different. When did you last eat in a brewery? In my case it was on the eve of the England-Wales game at Twickenham, 1968 for a private event. The centre piece was a huge poached Wye salmon accompanied by the finest cuts from the ovine, porcine and the bovine family. Young’s brewed the best beer in England and owned the finest pubs.

Many of the knowing ones regard Pivo as one of the capital’s best kept secrets, and may not appreciate bringing it to wider attention.

The venue is sited in what most would regard as a war-zone, not just on the buffer, but in it. The intrepid visitor might believe they were being directed to an ambush. Go to Phaneromeni with the school playground at your back, enter the darkened Asklipiou Street, walk past the magnificent old derelict mansions, and there like a beacon beckoning on Beachyhead is Pivo.

We arrived at 7pm and were shown to a table for two in an open courtyard surrounded by bright lights and the welcoming tones of the late great JJ Cale, which set the seal on the whole evening.

The establishment is run by a family of brothers and a cousin who have spent an unusual period of their young lives thinking, drinking and making beer. It seems time spent in the Czech state proved inspirational and a collaboration with a renowned Spanish brewer brought them to this beer heaven. I have not tasted any better for decades.

Mariana, our charming waitress, explained the way of the Pivo. We may order the special dishes of the day: Salmon, Chicken or Risotto, or choose from the menu that offers platters of baked sausages; meatballs in chilli or a cheese and deli mix. Two salads, six main dishes ranging though bacon, chops, chicken schnitzel – pork shank only on Friday and Saturday – and two vegetarian dishes, one curried. There is a wine list but I won’t mention it; why drink wine in a brewery?

The sausages must be the best thing to eat in a brewery, especially as they are cooked in beer. The companion ordered the schnitzel and we shared the Gorgonzola salad with fresh strips of apple and a berry dressing. It was the beer that really gripped the taste buds. Mine was the 3223, a classic Belgian style IPA brewed on the premises: it takes its name from the mileage between Nicosia and Bilbao. The flavour is riveting. The companion had the Czech black roasted beer.

My sausages were exactly as expected: five huge specimens with opposing pots of English and French mustard. The companion’s schnitzel disappointed, there was an insubstantial splash of mashed potato, and a drab line of mixed salad. The sausages were first rate.

We had the hot chocolate cake and ice-cream and a tiramisu that was served in a pint glass.

By nine o’clock the place is packed. We were greeted by our dentist, a regular, who was entertaining wife and friends. Then joined by friend and colleague, we were introduced to the brewers and taken around the magnificent copper tubs; everything is temperature controlled – not easy in our capital city.

All in, a splendid evening. Every shape, size, age, class, gathered around the Temple of Baccus to drink the best brew in Cyprus. But don’t tell everybody.