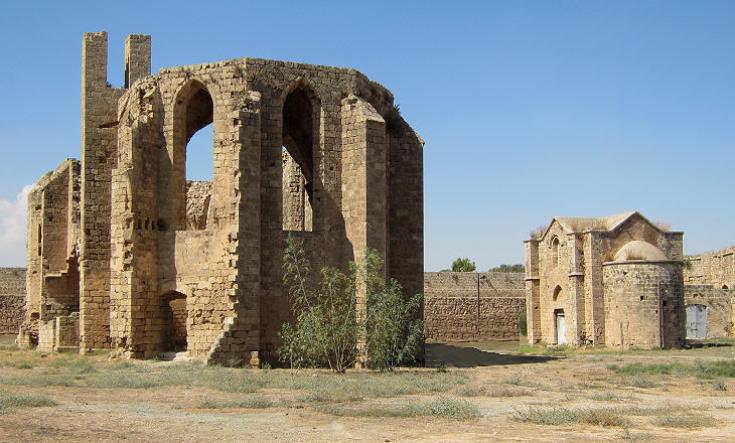 Greek Cypriots and Turkish Cypriots, along with the people of UNDP-Pff and the EU, are working methodically after years of abandonment and destruction to save the monuments of Cyprus, Greek Cypriot Representative at the Technical Committee on Cultural Heritage Takis Hadjidemetriou has said.

Hadjidemetriou was speaking on Saturday at a ceremony celebrating the completion of the conservation works of St Mary of Armenians Church and St Mary of Carmelite Church in the occupied city of Famagusta.

“Deep is our faith, despite what has happened, that nothing is forgotten, nothing is lost in history and culture. The monuments are those that ultimately judge our position in history and in the world”, he noted.

He added that “this message, genuine and powerful, embraces today the church of St. Mary of Armenians, which we receive from the contractor, to be handed over to our people. A monument of pain and love, as well as a combination of people and cultures at this edge of the Eastern Mediterranean”.

“Maintenance works are an expression of respect for the past, but also investment for the future. And all of us, attending the ceremony, are witnesses, preachers and a bridge of the path of the monument in time”, he concluded.

In his speech, Turkish Cypriot representative of the Committee,  Ali Tuncay, said that “as the Technical Committee on Cultural Heritage we started our long journey in 2008. It was not easy to get where we are now”.

“We learned to work together by creating an environment of mutual trust and cooperation following a long and cumbersome process. We met over and over again, talked to each other persistently and empathised with each other.  We travelled from Paphos to Karpas and visited hundreds of monuments all around the island together with our experts and determined the situation”, he said

In the end, he continued, “projects were prepared with technical support from the UNDP and financial contribution from the European Union and significant work has been carried out”.

Cultural heritage and different cultures, he added, “ should no longer be factors that cause conflicts but factors that contribute to cooperation, peace and prosperous living of Turkish Cypriots, Greek Cypriots, Armenians and other”.

“As people living on this island we filled up our history books with war, conflicts and evil we did to each other and we are teaching  these to our children. We competed over our sufferings. In our school textbooks, we never mentioned what we could achieve if we worked and cooperated together. We could not unite in pride and sorrow”, he concluded.

UNDP Cyprus Senior Programme Manager and Head of Office  Tiziana Zennaro noted that “the completion of conservation works to these two churches is an opportunity to gather and reflect on our efforts to bring people together around their shared heritage, in Famagusta and island wide”.

“This past year has been especially important for Famagusta, where UNDP is implementing projects for a total value of more than 4m euros of European Union funding”, she said.

By conserving these sites, she said, “we are not only preserving them one by one, for the future generations, but we are giving shape to the people of Famagusta’s vision of a vibrant and integrated multicultural city”.

Director of Structural Reform Support Service of the European Commission, Mary McCarthy said in her speech that “the European Union pays great attention to cultural heritage. 2018 is the European Year of Cultural Heritage and many events are taking place all over Europe”.

She expressed her sincere admiration for the work of the Technical Committee of Cultural Heritage. “It takes real leadership and vision to stand up for the common good and embrace Armenians, Maronites and Latins as an integral part of what Cyprus is and represents: a unique blend of cultures with a shared past and a common future”.

The European Union, she added, “ has so far helped facilitate the conservation of more than 60 cultural heritage sites across the island through a financial contribution of almost € 15 million. And we remain committed to continue to fund and support the successful work of the Technical Committee that sets such a striking example in building confidence and achieving shared success” she concluded.

Get to know the island through drawings