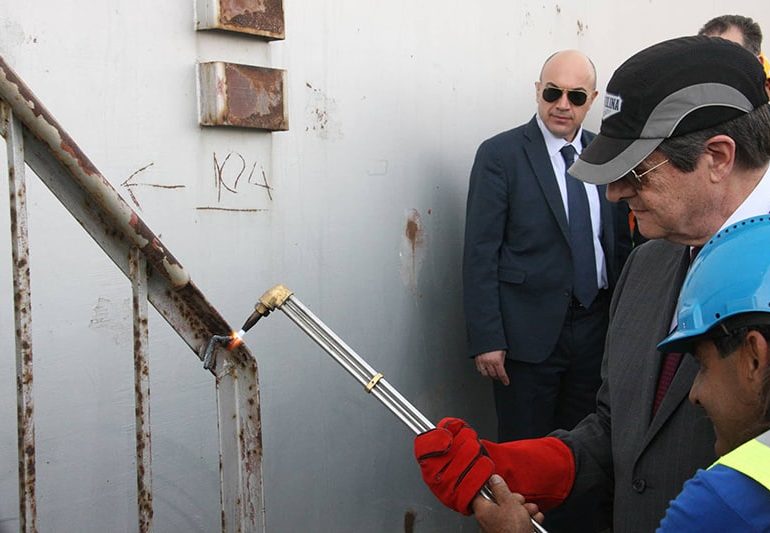 The Larnaca petroleum product plants started operating in the late 1940s. They provide for import, storage and distribution of petroleum products. Throughout the years regular calls have been made on the government and the private petroleum companies to decommission and relocate the plants to protect the community from any major accident or other hazards.

A recent “breakthrough” led to a memorandum of understanding (MoU) between the government, Larnaca and Livadia municipalities and the petroleum companies for the plants’ removal and relocation by 2020. President Anastasiades’ own recent symbolic participation in the destruction of a storage tank was supposed to be a gesture of political will to see through the agreement. However, a last-minute unilateral introduction of a new clause to the final agreement by the government’s legal services (which, according to reports, gave the right to any signatory to opt out at short notice) led to the MoU’s rejection by Larnaca municipality. To-date, therefore, the plants remain and do not appear to be going anywhere any time soon.

Petroleum products are volatile and can lead to ground, underground and atmospheric leakages, fires and explosions which allow toxic materials to inflict short and long-term illness, injury, disability or death. Plants with storage facilities, as in Larnaca, are particularly vulnerable and susceptible to major accidents. Even Norway, a country highly skilled in controlling accidents and which has strong government regulatory systems; an ethos of risk management; an effective body of inspections, regulations and enforcement under its Petroleum Safety Authority (PSA), is not shielded from the hazard. Leaks, fires and explosions are “the biggest contributor to major accident risk at Norway’s land-based petroleum plants”.

The Larnaca plants store highly toxic and combustible substances: petrol, kerosene, diesel and liquid petroleum gas (LPG). Petrol can ignite by heat, spark, open flame, hot surfaces or static charges. It can leak into soil, water supplies or find its way into sewers. Its vapour can travel across the ground and reach remote ignition sources causing a flashback fire and the risk of explosions. It causes blood disorders and genetic mutations as it is carcinogenic and a mutagen. Kerosene is highly toxic and can lead to skin and respiratory complications. A mixture of kerosene vapour and air can be explosive. Acute exposure can result in damage to the central nervous system and cause convulsions, coma or death. Diesel is an irritant: it affects the respiratory tract within minutes of exposure. Its fumes are carcinogenic. Once diesel catches fire it burns violently. LPG is carcinogenic and a mutagen. It is extremely flammable. It forms explosive mixtures with air and reacts with oxidisers, chlorine and fluorine. When heated to decomposition, it emits toxic fumes including carbon dioxide and monoxide. Inhalation may cause nausea, headaches, respiratory and heart problems, seizures, coma or death.

Considering the potentially dangerous substances stored in petroleum plants, it is surprising that serious accidents are relatively few. In the Larnaca plants, various minor incidents have been reported at various times but without major accidents. However, when major accidents do occur, particularly where such plants are situated close to or within communities, they can be devastating. They cause deaths, injuries and catastrophic environmental damage.

In a survey of all recorded major industrial accidents published in The International Review of Chemical Engineering in 2012, 319 major industrial accidents in 52 countries from 1917 to 2011 worldwide were identified. The top fifteen offenders were: the USA, with nearly 40 per cent of all accidents worldwide; followed by the UK (five per cent); India (just under five per cent); Germany (four per cent); Mexico (at just under four per cent); Japan (three per cent) and next in line Canada, China, Belgium, Italy, Brazil, Australia, France, Venezuela and Saudi Arabia. With the exception of the nuclear accidents at Chernobyl, Ukraine in 1986 and the Fukushima plant, Japan in 2011, some of the worst accidents were linked to petroleum products or their by-products e.g. petrol, LPG, oil and sulphur dioxide among others. These accidents were caused by fires or toxic releases or explosions or a combination of the three.

The companies running the Larnaca plants, being well aware of the above risks and in compliance with safety regulations and EU Directive 2012/18/EU on dangerous substances, were prompted to issue safety guidelines in the event of a major accident. In early March 2018, these companies distributed in parts of Larnaca district a booklet to explain the risks; what residents should do and not do in an emergency; and provided a list of product names and their respective hazards. In a carefully drafted warning about the risks, they state: “…an accident…could severely affect the local population as well as the flora and fauna in the region”.

Hard on the heels of the booklet three separate incidents involving petroleum products followed. On March 26 a petrol spillage occurred in Limassol when oil was being transported between two barges. On March 31, when workers used a petrol-fuelled pressure washer to clean an empty tanker truck in one of the petroleum plants in Larnaca, the combustible vapours emanating from the plant ignited and led to a fire. On May 12, while workers were carrying out welding operations on a storage plant containing highly flammable substances the plant caught fire but was put out before a major accident occurred. The Larnaca mayor, after many warnings and calls for the plants’ removal and relocation, reacted with despondency:  “I am tired of repeating the same things…the lives and safety of Larnaca residents [are] hanging by a thread”.

The decommissioning and removal of the plants have their own risks. A 2005 unpublished report, the result of a joint venture between the Larnaca municipality and the EU regarding the former Larnaca refinery, offers a crude guide to what is at stake. In the process of decommissioning and demolition, any accident involving gas or liquid release or fire or explosion may paralyse activity in the surrounding areas; will cause serious environmental damage and long-term disruption to transport and communications. The dismantling of the plants will create noise and dust; expose huge quantities of asbestos; glass/rock wool; aluminium; oily sludge and tons of rubble and aggregate; toxic compounds and tons of piping.

The reclamation and remediation of the land is another hazard. The process will generate a massive amount of environmental upheaval including heavy machinery used in and out of site; disposal and replacement of contaminated soil; dust; interference and obstruction of local traffic and business; and noise pollution. This scenario does not take into account the possibility of more contamination by unearthing hitherto unknown pollutants which existed, leaked or were deposited and buried out of sight.

But between the two options of either keeping the plants or demolishing and relocating them, the first is a non-starter. It invites a disastrous accident to happen at any time. When it does happen, nobody should be under any illusions. It will not just affect Larnaca. The disaster will touch every corner of the island and its economy will take a direct hit.

The second option, if not strictly managed (e.g. by an independent supervisory body of experts), may still cause an accident or pose environmental challenges of its own.  But at least on safe completion of the tasks, Larnaca, and Cyprus, can look positively ahead with a sigh of relief and a strong sense of achievement.

The ifs and buts of non-linear global warning