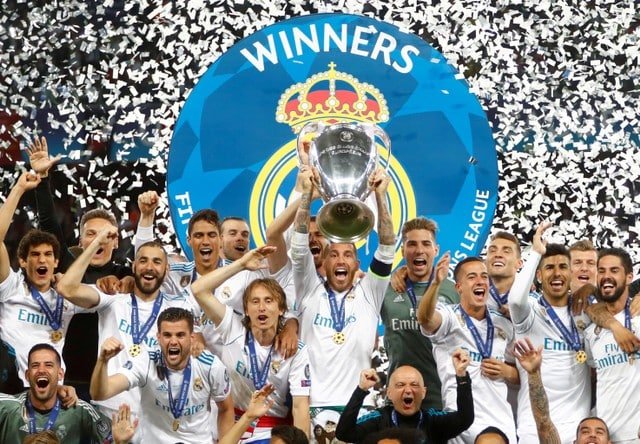 Liverpool came into Saturday’s Champions League final against Real Madrid on a wave of confidence but Zinedine Zidane’s side showed exactly why they are the masters of Europe’s top club competition in their 3-1 win.

Real have now won three Champions League titles in a row, something no team has achieved since the switch from the European Cup knockout format, and while they may not be remembered as the most attractive or transformative of teams there is no doubt they know how to win on the biggest stage.

Juergen Klopp’s Liverpool produced exhilarating football on their way to the final, ripping apart Porto, Manchester City and AS Roma with some thrilling attacking displays.

But this Real side, who finished third in La Liga, 17 points behind champions Barcelona, have a habit of taking the wind out of their opponent’s sails and finding a way to win.

This time it was not the genius or deadly finishing of five-times World Player of the Year Cristiano Ronaldo that proved to be the decisive factor.

Two goals were simply handed to Real by Liverpool goalkeeper Loris Karius, whose hapless performance will be remembered as one of the worst by a keeper at this level.

But both those mistakes had to be capitalised upon, and Real rarely turn down such gifts.

Karim Benzema reacted sharply and with alertness to take advantage of Karius’s rushed throw in his direction, to open the scoring.

Karius was also at fault for Real’s third when Gareth Bale fired a hopeful, long range effort through the wafting hands of the German keeper to wrap up the win.

Good fortune, without a doubt, but Bale had the nous to realise the keeper was vulnerable and the ability to expose him.

The Welshman’s confidence came from his earlier goal, a brilliant bicycle kick that put Real 2-1 up.

Zidane gets little credit for Real’s success and is viewed as a fortunate man who took over a well-established side and merely kept them running smoothly – at least in Europe.

But the Frenchman was prancing around the touchline after Bale’s screamer, which came just three minutes after he had brought the Welshman on.

It was an inspired switch and a brave one given that the player who was withdrawn, Isco, had until that point been Real’s most dangerous attacking threat.

Add into the picture that Bale, for some reason, has never convinced the supporters of the Spanish club of his worth, while Isco is adored by the Madrid faithful, and Zidane’s decision-making looks even more astute.

Liverpool will rue the misfortune of the injury to their top scorer Mohamed Salah which led to his first-half departure but that also exposed another key to Real’s success.

While Zidane was able to turn to Bale and the exciting Marco Ascencio off the bench, Klopp was forced to throw on Adam Lallana, who only recently returned from injury and had made just three starts this season, when Salah, with 44 goals in all competitions, had to go off.

The lessons for Klopp are obvious. Liverpool need greater strength in depth and, as cruel as it is obvious to note, a new goalkeeper.

As wonderful and inspiring as their football has been in this campaign, the Merseysiders could also take a leaf out of Real’s book and seek a way to add a little more steel and discipline to their pounding pressing and thrilling attacking play.

Real may not be a team that charm the neutrals or raise the heartbeat but it is impossible not to respect a side which, as Klopp had noted before the game, have the efficiency and reliability of a Swiss watch.

They have not won four Champions Leagues in five years out of good fortune.

Real have winning in Europe in their DNA and no one in the modern game has been able to match their merciless ability, shown once again on Saturday, to take whatever opportunities are presented to them.

Cyprus to resettle ten families of Syrian refugees in 2018