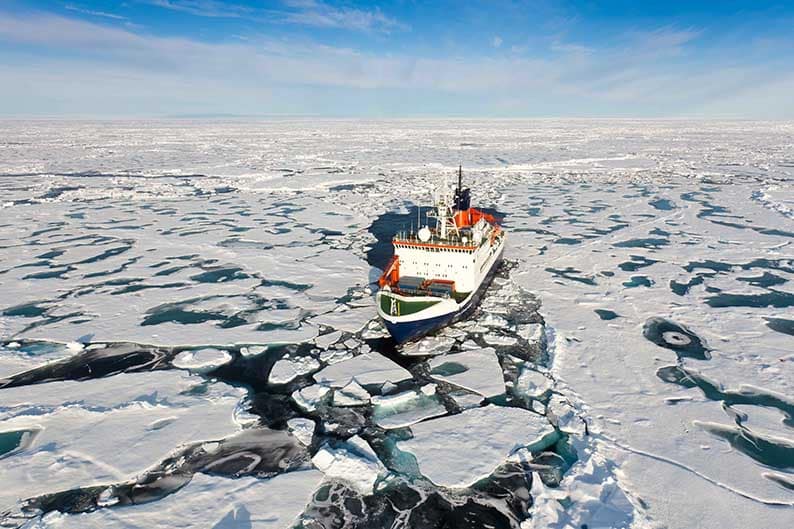 epa02953124 An undated handout picture provided by the Alfred Wegener Institute of Polar and Marine Research on 06 October 2011 shows an aerial view of the research ship 'Polarstern' (North Star) sailing on the Artic Ocean at the North Pole. In the central Arctic the proportion of old, thick sea ice has declined significantly. Instead, the ice cover now largely consists of thin, one-year-old floes. This is one of the results that scientists of the Alfred Wegener Institute for Polar and Marine Research in the Helmholtz Association brought back from the 26th Arctic expedition of the research vessel Polarstern. EPA/STEFAN HENDRIKS / ALRED WEGENER INSTITUTE **MANDATORY CREDIT** HANDOUT EDITORIAL USE ONLY

Here are two interesting facts. One is that the winter temperatures in the Arctic this year were the highest ever recorded. On two days in February, it was actually warmer at the North Pole than it was in Zurich, Switzerland. At one location in Greenland, the temperature rose to 36 degrees C higher than the usual average for that time of year.

The other interesting fact, revealed last month in two articles in ‘Nature’, one of the world’s leading scientific journals, is that the Gulf Stream is slowing down. In fact, it is now moving more slowly than at any time in the past 1,600 years (which is as far back as studies have gone). This could be very bad news for Western Europe.

The difficulty comes in figuring out what these facts mean – if they mean anything at all and are not just random variations of an unusually extreme kind. And this is the point in the discussion at which you start to hear the climate scientists use the word ‘non-linear’ all the time.

Most people think of global warming as a smooth, gradual process. It might end up doing a lot of damage, but it will sort of creep up on you, not smack you in the face. Unfortunately, that is not how climate change has proceeded in many past cases of warming or cooling.

The change can be abrupt and quite extreme – and once it has happened, it becomes the new normal, perhaps for a very long time. Like many complex systems, the climate is non-linear: it stays the same for a long time, and then suddenly some ‘tipping point’ is reached, and the whole thing flips into a different configuration.

Now, the warming in the Arctic is not non-linear. It’s a trend that has been continuous for decades, although it has accelerated greatly in recent years: the amount of sea-ice coverage at the point of maximum freeze-up, in late March, has been far lower in 2015-18 than ever before.

Indeed, we’re almost certain to see an ice-free Arctic Ocean at the end of the summer melt season at some point in the next decade. Some of the ice will reform in the following winter, but less and less of it as the years pass. Without ice cover the water will be warmed directly by sunlight, so one day the whole ocean will be mostly ice-free year-round.

The focus of concern for the moment, however, is on what the warming is doing to the Greenland ice-cap. This ice is on land, and when it melts it raises the sea-level. More importantly for the near term may be the fact that it is putting a large volume of fresh water into the northern North Atlantic Ocean.

That may be part of what is slowing the Gulf Stream down. It’s a surface current of warm water from the tropics that travels at an average speed of six km per hour, contains as much water as there is in all the world’s rivers, and moves it all the way up to the seas between Iceland and Norway. Then the water cools off, drops to the bottom, and returns southwards as a deep-water cold current.

To be more precise, it stops going so far north: it ‘overturns’, dives to the bottom and heads back south long before it reaches the latitude of European countries like Ireland, Britain and Norway. And when it has done that in the past, the average temperature in those countries dropped by up to 10 degrees C.

There is reason to suspect that what was happening in these incidents was that a global warming trend was melting a lot of cool fresh water into the northern seas and blocking the Gulf Stream from getting so far north. So is that about to happen again? Nobody knows, but according to the latest studies the Gulf Stream has already slowed by 15 per cent in the past 50-150 years.

When it shut down in the past it was abrupt and fast: non-linear, in other words. The 15 per cent slowdown is not necessarily an indicator that the whole northern branch of the current is on the brink of shutting down. But then again, it might be.

Gwynne Dyer’s new book, Growing Pains: The Future of Democracy (and Work), was published last month by Scribe in the United States, Canada, the United Kingdom, Australia and New Zealand

Removal of Larnaca’s petrol plants has taken far too long