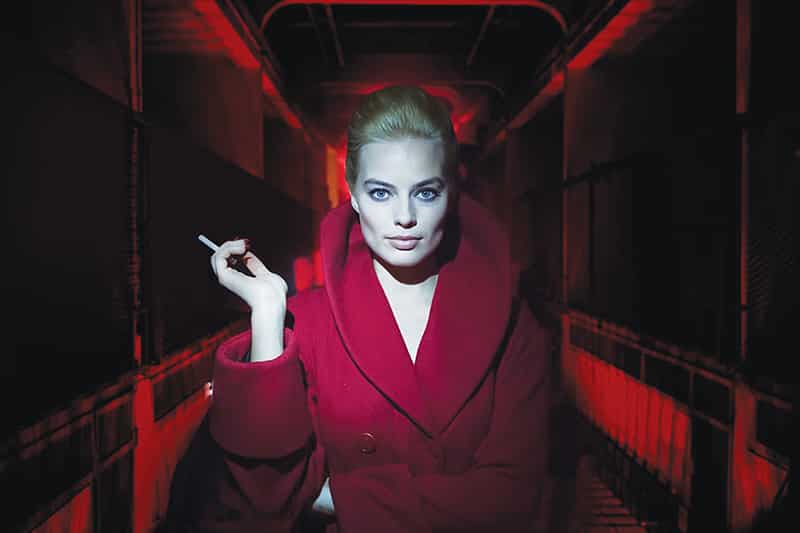 Nothing’s as unfashionable as yesterday’s fashions. For about a decade, following the success of Pulp Fiction (1994) in the States and Lock, Stock and Two Smoking Barrels (1998) in Britain, pop culture went through a laddish phase; films featured boys being boys, playing at being gangsters and indulging in humorous ultra-violence – but the landscape has shifted now, and watching that stuff seems a little embarrassing. Terminal tries to resuscitate the laddish late 90s, with a feminist tweak and some eye-popping colours. It doesn’t work.

You can spot the references, none-too-subtly arrayed in the film’s stagy schema. Dialogue out of Guy Ritchie, including the seminal “You’re becoming a f**kin’ liability” (a straight steal from Lock, Stock, as I recall). Two hitmen chatting about hitman movies, in the self-aware manner of Vincent and Jules in Pulp Fiction. An unsurprising dollop of The Usual Suspects. Even the colours – opening titles in neon, garish filters all over the place – recall another (more recent) cult favourite, Enter the Void, especially a bit where flickering light seems to shudder down a fluorescent-red corridor, like a living thing.

That light is more alive than the characters, though it’s wrong to expect verisimilitude; we open, after all, with a cheeky “Let the games begin!”, the film being transparently an “over-elaborate scheme” without much connection to real life. The title puns, because the nocturnal setting is a railway terminal but there’s also a guy (Bill, played by Simon Pegg) with a terminal illness. He’s being teased and flirted with by a waitress named Annie (Margot Robbie) – who also, in a different guise, teases the aforementioned hitmen as a stripper named Bunny. The final piece in the puzzle is Mike Myers, whistling ‘Danny Boy’ and pushing a cart as the night janitor, his cartoonish doddering and fake English accent playing like something out of Mary Poppins.

Annie/Bunny does the “naughty girl” with a touch of subservience (“I need a firm hand,” she informs the beguiled hitman) – but of course it’s all an act, since we already know she’s a wannabe killer with a hidden agenda. An early scene finds her in a church confessional, director Vaughn Stein flashing it up with extreme, gratuitous close-ups of her red lips and emerald-green eyes; “Bless me father,” she teases, bad priests being an obvious example of the proverbial patriarchy. Bad teachers and bad dads also appear later on, though the film has so few characters it’d be a spoiler to reveal more.

The point is that Terminal tries to update its laddish sources by including a woman, who of course turns out to be smarter and more ruthless than the lads (the recent Free Fire did something similar). The effort is appreciated – but the character is such a cartoon one might end up being nostalgic for the 90s films, where women were ignored altogether. Annie is “the freak, the weirdo, the angel-faced kid with a heart of darkness,” says Bill, convoluted dialogue with a morbid-Goth kick being a major part of this movie (he also corrects her grammar, and explains the literary convention known as the ‘pathetic fallacy’). For a while, the combination of shameless verbosity and visual dazzle – plus a solid performance from Pegg as self-deprecating, middle-class Englishman incarnate – holds the attention, even as it’s clear that the film isn’t very good. But the tabloid-tawdry thinness and ugliness of Stein’s vision eventually catches up with it; the last half-hour (when the various strands get resolved) is both anti-climactic and very unpleasant.

Terminal has a certain imaginative force; it’s not every film that scatters Lewis Carroll references in a cavernous, neon-lit, multi-coloured dreamscape. But it flatters to deceive. Even the florid dialogue is a scam, as it was in Guy Ritchie, the self-made macho’s implicit mockery of intellectuals who use big words. At one point, the hitmen argue over the word ‘penchant’. “It’s pronounced pan-shan,” says the dandyish younger one (Max Irons), floating the word in the French manner; “It’s pronounced ‘shut yer f**kin’ mouth’, is how it’s pronounced,” snaps his down-to-earth partner (Dexter Fletcher). This is ultimately quite depressing stuff, an ornate world elaborately constructed just so it can be slapped down by the brute hand of violence.

Fashions come and go, of course. Lad culture is out, at the moment; sensitive males are the late-10s ideal. Still, I like to think Terminal would’ve seemed obnoxious even 20 years ago – superficially attractive, in its way, but all the more obnoxious for being empty and devoid of ideas beneath the glitzy surface. “I’m the surprise they never see coming,” purrs Annie, positing the film as a kind of subversive undermining of macho misogyny. You’re not fooling anyone, you know.