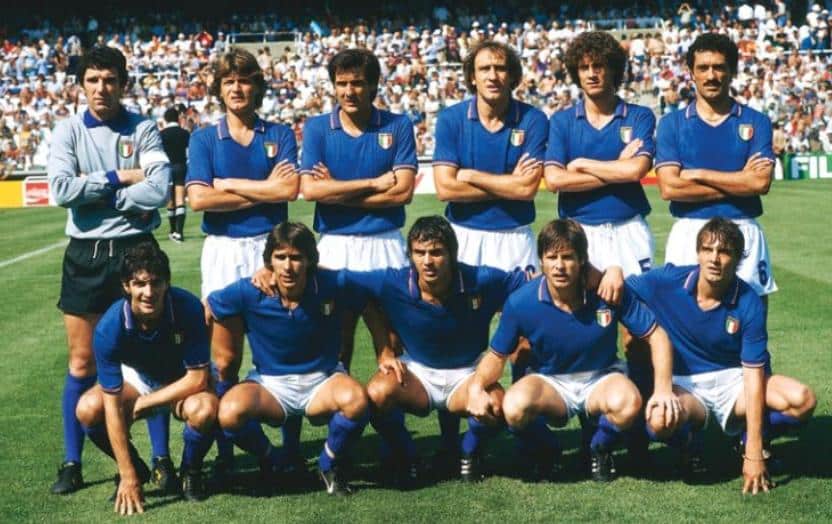 The teams were divided into six groups of four, with the top two teams in each group advancing to the second round, where they split into four groups of three.

The winners of each group advanced to the semi-finals.

During the group stages, Hungary beat El Salvador 10–1, which has been the only occasion to this day that a team scored ten goals in a World Cup match.

Another record was set in the same match, with Hungary’s Laszlo Kiss scoring the fastest ever World Cup hat-trick – three goals in seven minutes.

The group game between West Germany and Austria later resulted in a change of World Cup rules, after both teams obviously played out the 1-0 scoreline which sealed qualification for both countries.

The semi-final game between West Germany and France was the first ever to be decided in a penalty shoot-out on 8 July, with France’s Alain Giresse converting the first ever penalty. The West Germans though were the eventual winners by 5-4.

There was further controversy in the semi-final between West Germany and France, when German goalkeeper Harald Schumacher’s violent challenge took out Patrick Battiston, with the score at 1–1. Schumacher escaped a red card, and Germany won a penalty shoot-out, after fighting back from 3-1 down.

Hosts Spain flopped, with only one win in five games, while England were back after 12 years away and went home undefeated after five games including two goalless draws in Phase 2.

Brazil came into the tournament with their best team since 1970 – some experts regarded it to be even better.

The beautiful flowing style won plaudits around the world as the goals piled up against the Soviet Union, Scotland, New Zealand and Argentina.

The samba boys looked unstoppable until they ran into Italy and striker Paolo Rossi, who scored a hat-trick in a memorable 3-2 win with a semi-final spot at stake.

Rossi almost missed the World Cup in Spain after he was given a 3-year ban in 1980 because of his involvement in a betting scandal (the Totonero). The ban was reduced to 2 years allowing to play in the tournament. He always claimed his innocence.

Overall, FIFA could look back at the first 24-team World Cup with satisfaction. The tournament set-up needed fine tuning, with the knock-out stage re-introduced for 1986.

The 1982 final was contested between Italy and West Germany at Real Madrid’s Santiago Bernabeu stadium.

The first half featured the first missed penalty in World Cup final history when Italy’s Antonio Cabrini fired wide of goal, but the Azzurri recovered after the interval when Paolo Rossi opened the scoring after 57 minutes.

Germany’s Paul Breitner reduced the arrears in the 83rd minute, but it was too little, too late as Italy held on to claim their first World Cup title in 44 years, and their third overall.

Coming after their 1934 and 1938 victories, Italy had now drawn level with record winners Brazil.

Captain and goalkeeper Dino Zoff at 40 also became the oldest player to win the World Cup.

For manager Enzo Bearzot, the triumph was a wonderful vindication against his spiteful critics in the press, as he became the most successful Italian manager since the legendary Vittorio Pozzo.