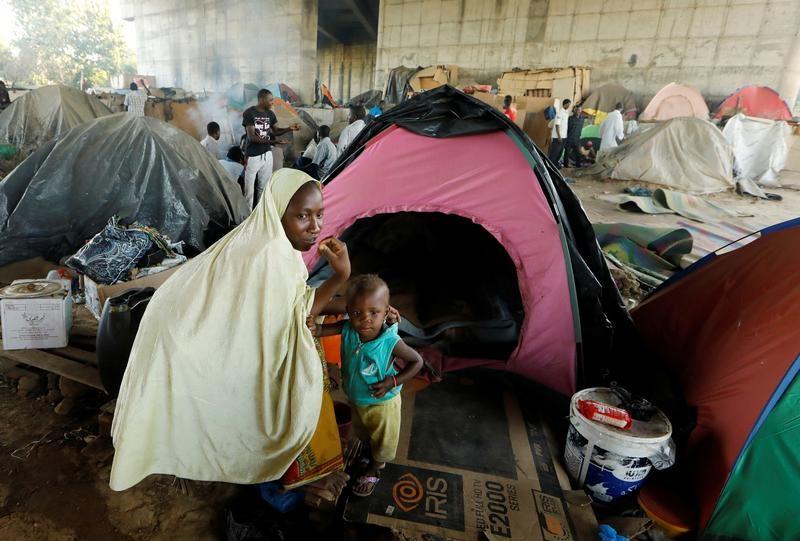 An African migrant sits with her son beside her tent at a makeshift camp set up under the bridge of a motorway on the outskirts of Algiers, Algeria

Dozens of Africans say they were sold for labour and trapped in slavery in Algeria in what aid agencies fear may be a widening trend of abusing migrants headed for a new life in Europe.

Algerian authorities could not be reached for comment and several experts cast doubt on claims that such abuses are widespread in the north African country.

The tightly governed state has become a popular gateway to the Mediterranean since it became tougher to pass through Libya, where slavery, rape and torture are rife.

Amid a surge in anti-migrant sentiment, Algeria since late last year has sent thousands of migrants back over its southern border into Niger, according to the United Nations Migration Agency (IOM), where many tell stories of exploitation.

The scale of abuse is not known, but an IOM survey of thousands of migrants suggested it could rival Libya.

The Thomson Reuters Foundation heard detailed accounts of forced labour and slavery from an international charity and a local association in Agadez, Niger’s main migrant transit hub, and interviewed two of the victims by telephone.

“The first time they sold me for 100,000 CFA francs ($170),” said Ousmane Bah, a 21-year-old from Guinea who said he was sold twice in Algeria by unknown captors and worked in construction.

“They took our passports. They hit us. We didn’t eat. We didn’t drink,” he told the Thomson Reuters Foundation. “I was a slave for six months.”

Accounts of abuse are similar, said Abdoulaye Maizoumbou, a project coordinator for global charity Catholic Relief Services. Of about 30 migrants he met who were deported from Algeria, about 20 said they had been enslaved, he said.

In most cases, migrants said they were sold in and around the southern city of Tamanrasset shortly after entering the country, often by smugglers of their own nationality, he said.

Some said they were tortured in order to blackmail their parents into paying the captors, but even when the money arrived they were forced to work for no pay, or sold, said Maizoumbou.

One man told the Thomson Reuters Foundation he slept in a sheep pen and suffered beatings if an animal got sick or dirty.

“They would bring out machetes and I would get on my knees and apologise and they would let it go,” said Ogounidje Tange Mazu, from Togo.

The IOM in Algeria has received three reports this year from friends and relatives of African migrants held hostage and forced to work in the country. “It’s probably just an indication that it is happening. How big it is we don’t know,” said its chief of mission Pascal Reyntjens.

TWO SIDES TO THE STORY

Several analysts considered it unlikely that slavery was widespread in Algeria, since the country has a functioning judiciary and strong police force – unlike Libya.

Algerian authorities could not be reached for comment, but a senior official said last week the country is facing a “surge of migration” and needs more help.

In a statement this month, the government rejected reports from a U.N. human rights team that its mass deportations of migrants were inhuman, saying that it is doing what is necessary to ensure the safety of its citizens.

“I would be very surprised that (slavery) would be allowed to happen in Algeria,” said Issandr El Amrani, North Africa project director for the International Crisis Group.

“The situation is just not comparable to Libya,” he added.

But in the ghettos of Agadez, Niger’s main transit hub, some people told a different story.

“What happens in Algeria surpasses what happens in Libya,” said Bachir Amma, a Nigerien ex-smuggler who runs a football club and a local association to inform migrants of the risks.

Migrants in Libya are often starved and beaten by armed groups, and there have been reports of “open slave markets” where migrants are put on sale, according to the U.N. human rights office.

Amma said he had spoken with more than 75 migrants back from Algeria, the majority of whom described slave-like conditions.

“NGOs don’t know about this because they’re too interested in Libya,” he told the Thomson Reuters Foundation.

In 2016, the IOM surveyed about 6,300 migrants in Niger, most of whom had returned from Algeria and Libya. Sixty-five percent of those who had lived in Algeria said they had experienced violence and abuse, compared to 61 percent in Libya.

An estimated 75,000 migrants live in Algeria, the IOM said.

Italy may be on wrong path in fighting coronavirus contagion – scientist

EasyJet grounds fleet as pandemic pushes airlines to the brink