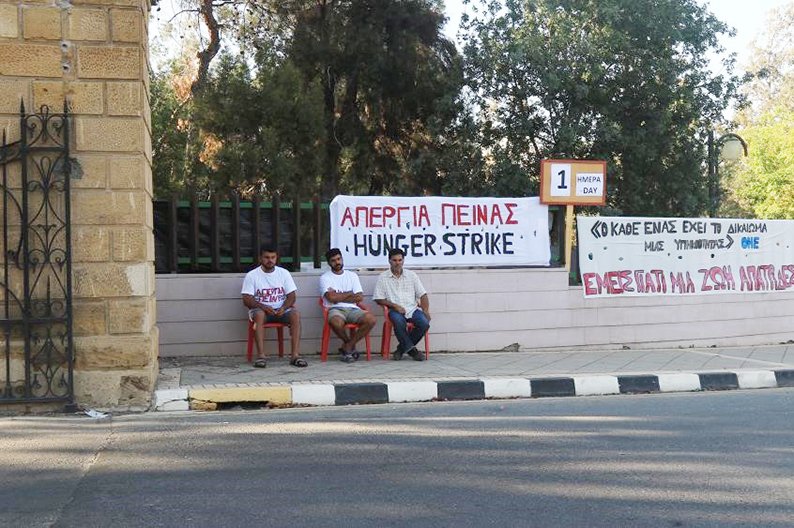 The UNHCR said on Wednesday it was gravely concerned about the family of stateless Kurds from Syria who have been protesting outside the interior ministry and presidential palace for over a year and who last week began a new hunger strike.

The international organisation urged the government to take all appropriate actions to prevent possible loss of life.

“Members of the family have been on hunger and thirst strike over the last several days, and some are now in critical condition in hospital, where their lives are at risk,” the UNHCR said in a statement.

It added that while it does not condone or encourage protests and hunger strikes as a means to challenge unfavourable government decisions, “we note with regret that this family feels neglected and abandoned, with no other options left to them”.

The family of Hassan-Janbali, stateless Kurds from Syria, have been seeking Cypriot citizenship for years. From October 2014 to August 2015 the family, along with other stateless Kurdish refugees, protested outside the ministry of the interior. They discontinued their protest after one member of the family who fulfilled the required terms was granted Cypriot citizenship.

At the time then-interior minister Socrates Hasikos proposed that the other family members submit their citizenship applications in a year from then, when their stay in Cyprus would meet the time requirements.

These applications were submitted in the period 2015-2017 but they were all collectively rejected by the Ministry of Interior on 27/3/2017, and the family resumed their protests afterwards. They started a hunger and thirst strike last week.

“They see their situation as one of double victimisation: first, by the country that not only rendered them stateless but also forced them into exile; and secondly by the enormous difficulties they had to endure for the last decade in obtaining asylum in Cyprus and trying to maintain their survival and dignity,” the UNHCR said.

It said the family came to Cyprus and applied for asylum between 2006 and 2009. Despite “their evident needs for international protection”, they continued to be considered as “irregular migrants”, the UNHCR said, “with no right of residence in the Republic, and without access to basic asylum rights, including education, welfare assistance or access to work”.

It added that they were finally granted subsidiary protection in 2015. “But it was for them too little, too late.”

First, under the circumstances prevailing in Syria, the stateless Kurds seeking international protection are likely to fulfil the requirements of the refugee definition contained in the 1951 Convention relating to the Status of Refugees, the organisation said.

Secondly, the granting of subsidiary protection could not solve one of the principal problems of these persons: the lack of an internationally-recognised, proper travel document.

“It was for this reason that they were advised by the ministry of interior to apply for citizenship, which they promptly did. Their applications were, however, collectively refused by a single decision in March 2017,” the UNHCR said, adding that it considers citizenship as a fundamental element of human security.

The UNHCR said it had repeatedly raised with the authorities the importance of citizenship to refugees and stateless persons like the Kurdish family “whose lives and future currently hang in the balance” and reiterated its request for a reconsideration of the citizenship application of the family.