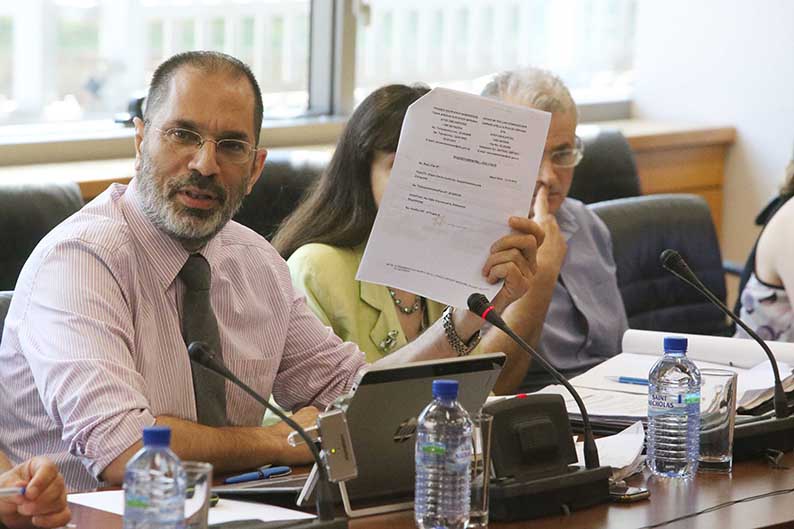 Keeping up the pressure on the public official, Michaelides zeroed in on the law commissioner’s apparent favouritism toward a specific lawyer.

He said that, under Koursouba’s watch, her office had assigned to the same lawyer a total of 26 contracts for legal work.

This raised the possibility of tax evasion by the lawyer, Michaelides said, adding that he would be passing on the information to tax authorities.

Defending her office, Koursoumba suggested the auditor-general was deliberately going after the lawyer.

The lawyer had been selected to do work for the law commissioner after an open process, she added.

Perhaps going for the jugular, Michaelides next reported that Koursoumba’s husband had used stationery from her office when he was writing to the Cooperative Central Bank regarding a personal loan.

On December 7, 2016 the bank notified Koursoumba’s spouse that it was denying a prior request of his that part of his mortgage be written off. He was also advised to begin repaying the outstanding debt immediately.

According to the auditor-general, one week after the bank sent this letter, Koursoumba’s husband addressed a letter to the financial ombudsman informing him that the bank had denied his request.

The letter, sent by fax, bore the letterhead of the law commissioner’s office.

Koursoumba responded that at the time in question her husband was unemployed and did not have his own office, which was why he used resources from her own office.

“It was a mistake, but I was not in any way involved in my husband’s dealings with the bank or with the loan.”

Michaelides then cited two more cases where Koursoumba used her office’s work vehicle for personal use.

On two occasions, she had herself chauffeured to the airport, where the flights she took were on personal, not official, business.

Hitting back, Koursoumba said the auditor-general, under the cover of auditing her office, was scraping the bottom of the barrel in a bid to dish dirt on her.

“I have been dragged through the mud. My family and even my grandchildren feel tainted,” she told MPs.

Discussion of the law commissioner’s expenses is set to continue at the House watchdog committee at a later date.

Danish parliament bans the wearing of face veils in public