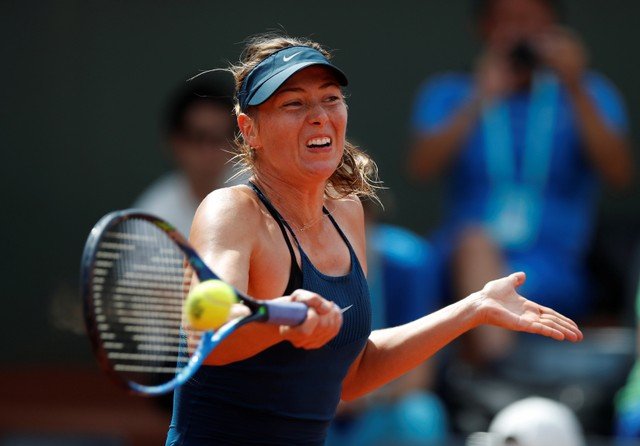 Maria Sharapova huffed and puffed her way into the French Open third round with a 7-5 6-4 victory over Croatia’s Donna Vekic on Thursday.

The former world number one, back at Roland Garros after a two-year absence, was erratic throughout but her iron willpower helped her set up a meeting with sixth seed Karolina Pliskova.

Sharapova, who missed the 2016 tournament because of a doping ban and was denied an invitation last year on her return from suspension, will need to be more consistent if she is to beat the Czech, a semi-finalist here last year.

She failed to finish off a point at the net and Vekic counter-attacked to set up a break point in the first set, which the 28th-seeded Russian saved to move 4-3 up before breaking her opponent’s serve.

Vekic, however, broke straight back with a powerful service return.

Sharapova, who is on a quarter-final collision course with 2016 champion Garbine Muguruza of Spain, was waiting for her moment. It came in the 12th game when she forced the Croatian into a lung-busting rally, forcing her opponent to net a forehand and drop the opening set.

To break Vekic’s rhythm from the baseline, Sharapova mixed it up with exquisite drop shots, but she made 31 unforced errors and dropped serve four times on Court One.

Vekic, the world number 50, offered stiff resistance at 5-4 in the second set but she bowed out on the fifth match point when Sharapova fired a sizzling forehand winner.

Elsewhere, Simona Halep’s focus was still not as sharp as she would have liked but that did not prevent the Romanian top seed from blazing past American Taylor Townsend 6-3 6-1 in the second round.

A day after losing the first five games of her first-round match, Halep squandered a 5-1 lead as Townsend came from 0-40 down to save three set points with two unreturnable serves and a bludgeoning backhand volley winner.

After bagging that game with an ace, the 72nd-ranked American saved another set point in the next game before breaking the twice French Open finalist, who slapped a backhand into the net.

No doubt frustrated at her inability to close out the set, Halep started grunting every time she struck the ball and that change of tack appeared to produce the desired result as she broke to win the set on her fifth set point when she ended a 16-stroke rally with a sizzling forehand winner.

Townsend had lost all five previous matches against top-10 opponents and once Halep broke to take a 3-1 lead in the second set, that losing streak was doomed to continue.

The American, who has never won a Grand Slam match outside Roland Garros, dropped her serve again to trail 5-1 and Halep swiftly put her out of her misery by needing only one match point to book a third-round meeting with Andrea Petkovic.

Nicosia, get ready for Planet of Zeus