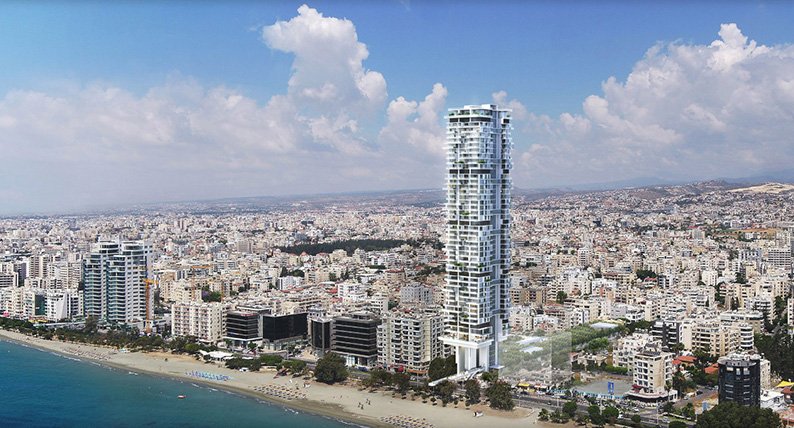 An artist's impression of the new building

The Shacolas group is planning to demolish the Debenhams Olympia shopping centre in Limassol to make way for a new residential high-rise building that would be the tallest in Cyprus.

Shacolas’ Woolworth Properties has already applied for a town planning license for the 197-metre-high tower of luxury apartments through its subsidiary Limassol Beach & Seaview Properties. A decision will be made at the municipality’s next meeting.

Last week Interior Minister Constantinos Petrides said the government had issued building permits for 25 high-rise buildings in the first three months of the year and and that 60 more were pending, most of them in Limassol.

Designed by architects Foster + Partners, the Aura will consist of 137 two-to-four-bedroom apartments and a five-bedroom penthouse with panoramic views of the Mediterranean. The building is designed to look like it hangs over its landscaped gardens.

The tallest building currently under construction in Limassol is the One, at 170 metres and scheduled to be completed in 2019. On its completion it will be the tallest seafront tower in Europe.

Trilogy, another high rise development in Limassol consists, according to its developer, Cybarco, of three towers, the tallest of which will be 161 metres above sea level. It is slated for completion in 2023.

Petrides said there are advantages to high rises as they leave larger open spaces, and that, contrary to common belief, they do not create a ‘visual wall’ along the sea but afford better visibility than lower wider ones.

Under the new rules, studies of microclimate impact on growth will be evaluated, in relation to sunlight, shading, airflow, thermal effect, reflections and light pollution and any other studies that may be required in accordance with environmental legislation.

Compensatory measures will be provided according to the scale of development, which will be particularly beneficial to the wider region and the local community.

Architecture and, in general, the aesthetics of the building should be of exceptional quality, and the design timeless.

From 2012 until now, the tallest building in Limassol has been the Residence Tower. The two towers are the same height as the Oval, at 75 metres.

The tallest structure in Nicosia will be the CH 101 on Makarios Avenue when it is completed in 2019, at 135 metres tall.