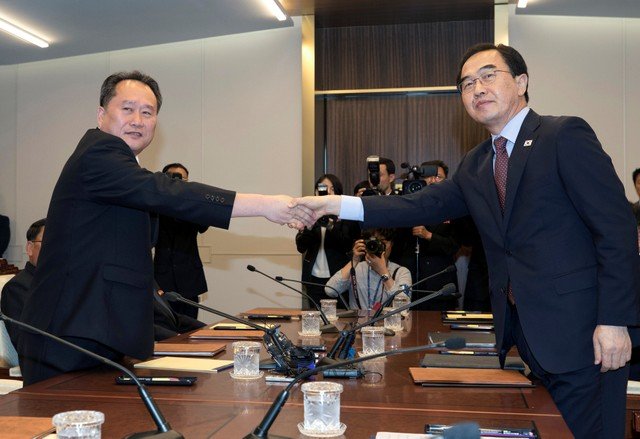 Ri Son Gwon, chairman of the Committee for the Peaceful Reunification of the Country, shakes hands with South Korean Unification Minister Cho Myoung-gyon after their meeting at the truce village of Panmunjom, South Korea, June 1

The two Koreas agreed at a high-level meeting on Friday to hold talks this month on military issues and reunions of families divided by the 1950-53 Korean War, they said in a statement.

The meeting in the border village of Panmunjom in the demilitarised zone that separates North and South Korea is the latest in a flurry of diplomatic activity intended to sustain a thaw in relations with the isolated North.

North Korea had called off a planned meeting with the South last month in protest against U.S.-South Korean air combat exercises before South Korean President Moon Jae-in and North Korean leader Kim Jong Un put the process back on track during a surprise second summit on Saturday.

While the two Koreas work to improve their ties, North Korea is in talks with the United States on a proposed summit between Kim Jong Un and U.S. President Donald Trump, tentatively set for June 12 in Singapore.

Friday’s talks were led by South Korea’s Unification Minister Cho Myoung-gyon and Ri Son Gwon, chairman of the North’s committee for the peaceful reunification of the country, and were a follow-up to an agreement reached during the first summit between Kim and Moon in April.

Military talks between the old rivals will take place on June 14 on the northern side of Panmunjom, and a separate session on sports exchanges on the southern side on June 18, the two sides said.

Talks about reunions of families divided by the war, which ended in a truce, not a peace treaty, would be held on June 22 at the Mount Kumgang resort north of the border.

Family reunions are an emotional issue that could help restore trust but they have been stalled in the absence of political engagement, said Elhadj As Sy, secretary general of the International Federation of Red Cross and Red Crescent Societies, who was in Seoul to discuss plans for reunions and other issues.

“With more engagement and political openings, many hurdles will be lifted,” Sy told Reuters in an interview.

The federation hopes that North Korea will allow it to provide more aid. An estimated 10 million North Koreans or 40 percent of the population need humanitarian assistance, Sy said.

Both Koreas also agreed to an early launch of a liaison office in the North Korean border city of Kaesong, where they operated a factory park until its closure during tension in 2016, they said in a statement.

Cho and Ri also agreed to hold regular meetings to expedite various working-level talks which would include cooperation on railways, forests and culture.

During the talks, Ri blamed Cho for having brought about a “grave situation” that led to the North’s cancellation of last month’s talks.

Ri did not give specific information but Pyongyang has lashed out at Seoul for allowing Thae Yong Ho, a former North Korean diplomat to Britain who defected to the South in 2016, to launch a book in parliament in which he describes Kim as “impatient, impulsive and violent”.

The North also demands the repatriation of a dozen North Korean restaurant workers, who came to the South in 2016 via China. The North says they were abducted by the South, but it says they defected freely.

“We don’t talk about what happened in the past. You just need to not repeat it again,” Ri said.

Ri also said an unspecified issue had become “a source of mistrust” and would determine “whether a mood of reconciliation and cooperation, or mistrust and confrontation is created between the North and South”.

“It is a very serious problem,” Ri said. He did not elaborate.

In another indication the process is at times testy, Ri accused South Korean officials of misrepresenting a comment about their joint industrial zone at Kaesong.

Cho did not specify when asked about contentious issues but told reporters they did not discuss the military exercises or nuclear issues. He declined to comment on whether the North demanded the restaurant workers back.

North Korea suggested they hold a joint celebration of the anniversary of a 2000 inter-Korean summit this month in the South, an official at Seoul’s unification ministry told reporters.

But that would not be possible due to scheduling and logistics issues, Cho said.

“There were some things in common and also differences between both sides until we adopted the joint statement,” Ri said, without elaborating.