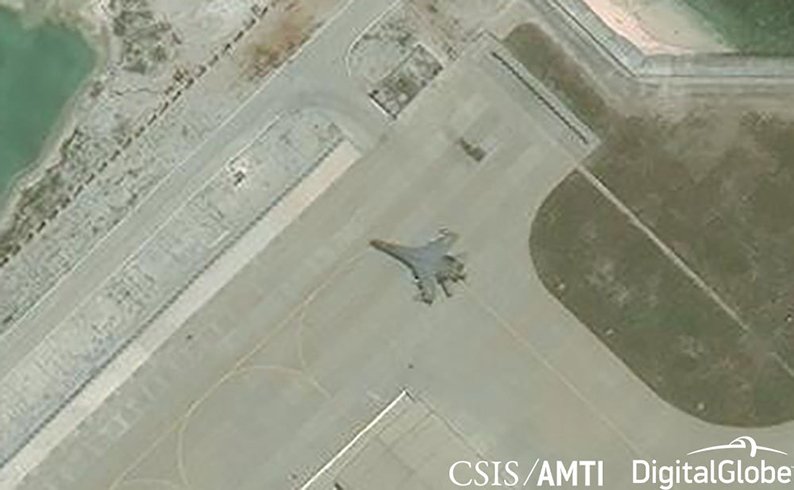 Satellite imagery shows what the CSIS Asia Maritime Transparency Initiative describes as the deployment of several new weapons systems, including a J-11 combat aircraft, at China’s base on Woody Island in the Paracels, South China Sea

The United States is willing to work with China on a “results- oriented” relationship, but Beijing’s actions in the South China Sea were coercive and the Pentagon would “compete vigorously” if needed, U.S. Defense Secretary Jim Mattis said on Saturday.

The comments by Mattis, speaking at the annual Shangri-La Dialogue in Singapore, come at a time of increased tension between the two nations in the South China Sea and highlight how President Donald Trump’s administration is looking to balance China’s cooperation on North Korea while dealing with its activities in the disputed sea.

“China’s policy in the South China Sea stands in stark contrast to the openness that our strategy promotes, it calls into question China’s broader goals,” said Mattis, who said he would be travelling to Beijing this month.

“The U.S. will continue to pursue a constructive, results-oriented relationship with China, cooperation whenever possible will be the name of the game and competing vigorously where we must … of course we recognise any sustainable Indo-Pacific order has a role for China,” he said.

Last month, China’s air force landed bombers on disputed islands and reefs in the South China Sea as part of a training exercise, triggering concern from Vietnam and the Philippines.

Satellite photographs taken on May 12 showed China appeared to have deployed truck-mounted surface-to-air missiles or anti-ship cruise missiles at Woody Island in the disputed sea.

“Despite China’s claims to the contrary, the placement of these weapon systems is tied directly to military use for the purposes of intimidation and coercion,” Mattis said.

While the operation had been planned months in advance, and similar operations have become routine, it came at a particularly sensitive time and just days after the Pentagon withdrew an invitation to China for a major U.S.-hosted naval drill.

China’s state-run Global Times newspaper said in an editorial tension in the South China Sea was “due to the U.S. continuing to increase its military presence in the region, forcing China to naturally upgrade its defensive weapons on the islands.”

“This in turn gives the U.S. more excuses to exert military pressure, causing regional tensions to spiral,” it said.

Mattis acknowledged that China’s militarisation of islands was a reality but warned of further consequences.

“I believe there are much larger consequences in the future when nations lose the rapport of their neighbours … eventually these (actions) do not pay off,” Mattis said.

He also reiterated that the Pentagon was committed to working with Taiwan to provide articles and services needed for its self defence, comments that are likely to anger China.

China’s hostility towards self-ruled Taiwan has grown since Tsai Ing-wen from the pro-independence Democratic Progressive Party won presidential elections on the island in 2016. China claims Taiwan as its own and it is one of its most sensitive issues.

Trump said on Friday an unprecedented nuclear arms summit with North Korean leader Kim Jong Un that the United States pulled out of will now go ahead as scheduled on June 12 in Singapore, adding another twist to a high-stakes diplomatic dance.

Mattis only made a glancing reference to North Korea, reiterating that it was a diplomatically led effort and the objective remained the “complete verifiable, and irreversible denuclearisation of the Korean Peninsula.”

He added that the status of U.S. troops in South Korea was not on the table when Trump and Kim meet, but left the door open to the issue being discussed down the road between Seoul and Washington if certain conditions were met.

“If the diplomats can do their work, if we can reduce the threat, if we can restore confidence building measures with something verifiable, then of course these kinds of issues can come up subsequently between two sovereign democracies, the Republic of Korea and the United States,” Mattis said.

“That issue is not on the table here in Singapore on the 12th, nor should it be,” Mattis said.

Mattis also sought to calm nervous allies in the region.

South Korea and Japan have expressed concern that Trump may put U.S. security interests ahead of theirs in pursuing a deal with North Korea.

Japan’s Defense Minister Itsunori Onodera, who also spoke at the forum, said it was important not to reward North Korea for only agreeing to dialogue.

He said the only way to bring peace in the region was to ensure North Korea take concrete actions to end all nuclear programmes and ballistic missiles of all ranges.

Mattis said: “We are focused on modernizing our alliance with both Republic of Korea and Japan, transforming these critical alliances to meet the challenges of the 21st-century.

“Make no mistake, America is in the Indo-Pacific to stay, this is our priority theatre, our interests and the region’s are inextricably intertwined.”

When asked if Trump’s approach towards allies, including a recent decision to put certain tariffs on Canada, Mexico and the European Union, was unproductive, Mattis acknowledged that there had been “some unusual approaches”.

Symphonies play out in neighbourhoods

Minister calls for digital transformation efforts to be intensified