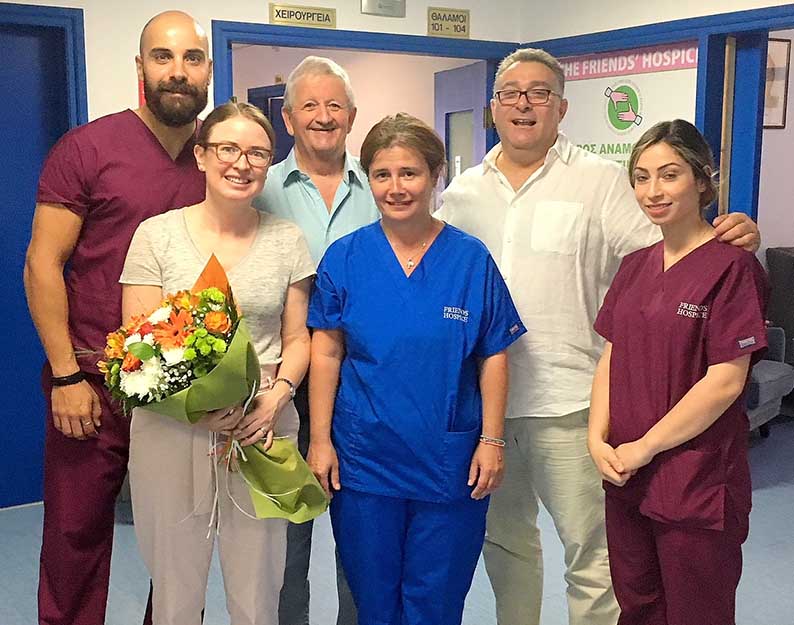 The Irish ambassador to Cyprus, Deirdre Ní Fhallúin (left), paid a visit to the hospice recently

The friends’ hospice in Paphos and the Cyprus anti-cancer society have formed a working relationship to benefit people suffering with life-limiting illnesses.

A memorandum of understanding has been signed by both organisations to support efforts on behalf of their respective patients. It combines training and an exchange of expertise and skill, according to Chris Jones, president of the friends’ hospice foundation.

“This is a great development,” said Jones.

The friend’s hospice was founded in 2006 and is situated in a dedicated wing of St George’s polyclinic in the centre of Paphos and has treated well over 1,000 patients offering free palliative and respite care. Its annual costs are around €250,000.

The Cyprus anti-cancer society was established in 1971 and operates the ‘Arodaphnousa palliative care centre’ in Nicosia and the ‘Evagorion palliative day centre’ in Limassol.

Both of these facilities offer palliative care to people suffering life-limiting illness for which there is no cure. It is free of charge for all nationalities. They also have offices in all districts which offer home-care services.

The agreement was reached following several weeks of discussion between the two entities.

The German Oncology Centre which opened in Ayios Athanasios in 2017, also encouraged the anti-cancer society to form better ties with Paphos based hospice to better serve patients in both towns.

“It is an acknowledgement that we are respected deliverers of quality palliative care to patients and support for their families. Our doctors, nurses and volunteers work hard for the widespread community and deserve credit for their service,” said Jones.

In addition, Dr Adamos Adamou MP, appointed by the government as responsible for co-ordinating the delivery of oncology services across Cyprus, has agreed to join the board of trustees of hospice to help implement the new collaboration.

Last year the ministry of health increased its grant to the hospice from €15,000 to €40,000. The funding is subject to close scrutiny regarding good governance, payment of VAT and audited accounts, said Jones.

“For our charity, which depends on donations and fund-raising, this is a very welcome contribution to the running costs, which currently stand at about €250,000 a year”, he said.

In addition, the ‘supporting hands’ logo which has been a symbol of the hospice from its inception has had an overhaul.

The new logo will feature alongside the emblem of the Cyprus anti-cancer society on all related literature and collection jars.

The uniforms of the friend’s hospice’s nursing staff have also been updated and are now in maroon.

The Irish ambassador to Cyprus, Deirdre Ní Fhallúin, paid a visit to the hospice recently and met with staff and patients to discover first-hand how it functions.

Police looking for one man after Sunday night’s murder (updated)