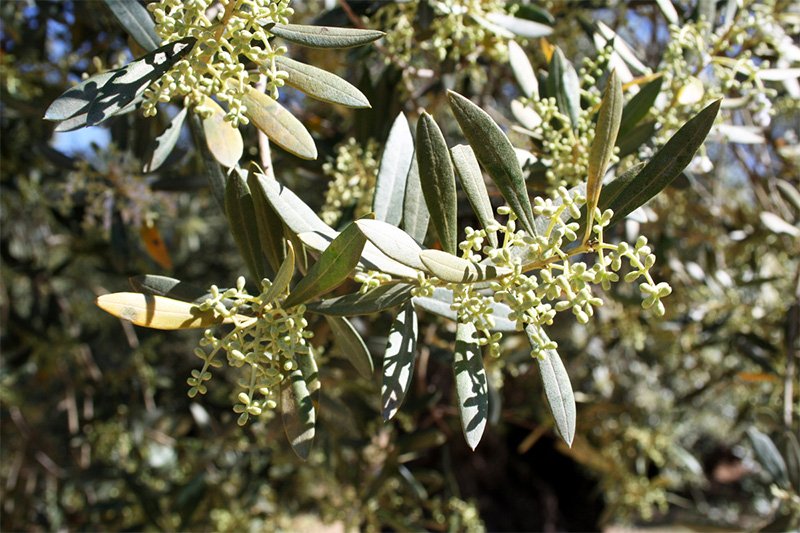 Cyprus can be such a dusty place, causing breathing problems for some people, especially the elderly and young children. Hot air from North Africa pushes into our area, bringing with it vast amounts of Saharan dust, which falls and settles everywhere. This happens regularly and can occur at any time of the year, obscuring the light and leaving a trail of dust over everything. Even washing hanging on the line can cause distress to some, because dust or pollen can cling to the items.

As the year progresses, many trees add their pollen to the atmosphere causing even more angst to the population. Generally, it is the male trees whose pollen is the problem. Casuarinas, for instance, which line my street, have huge pollen tassels twice a year, and each tassel may contain up to five million grains of pollen! This can spread with or without a breeze, around an area of between 300 and 700 metres, covering everything in yellow dust. Pecan trees have tassels too, but have female parts on the same tree, which trap some of the pollen before it travels too far. Olive tree pollen is known to affect many people, causing great discomfort and streaming eyes, so the trees are best grown in groves away from habitation. Trees are not the only plants that can cause allergies. Grasses and one of my favourite plants, wisteria, are offenders too.

It is possible to have a garden that will not cause you distress. According to a recent article in The Garden Magazine, Thomas Ogren, a Californian board member of SAFEgardening.org, and a researcher into pollen allergies recommends growing only female plants, which is fine if you only want to enjoy the flowers and not the fruits. Like any species, you have to have a male and female to create a result. However, he has devised a way to know whether a plant’s pollen will cause problems by a rating system of 1-10 called OPALS (Ogren Plant Allergy Scale) and plants will carry a rating label, 10 being the highest rating. Unfortunately, currently this scheme is only available in the USA and one plant nursery in Guernsey, but who knows how this useful way of determining the pollen content of plants may spread around the world.

So, how do you choose plants for your garden that will not cause any distress? Most flowering plants such as pecans, tomatoes, peaches and apricots among others, contain both male and female parts and are known as ‘monoecious’. A good example of this is sweet corn, where the tassel providing the pollen is the male flower, and the silk is the female. Any wind movement will accomplish the task of pollen falling from the male part to the female part resulting in plump corncobs. These plants are called self-fruiting. However, others like apples, pears, cherries and plums cannot be fertilised by their own pollen, are known as dioecious plants. To achieve any fruit set, a tree with male flowers should be grown nearby, as one without the other will not produce fruits or berries.

Unlike animals or humans, male and female plants do not have any difference in their appearance. They look the same, only their flowers and fruits can tell us their sex, so we must await the proper plant labelling to arrive in Cyprus.

THINGS TO DO IN THE GARDEN THIS MONTH

Should we have any rain showers from now onwards, they will probably take the form of quick thunderstorms. Weeds growing around a watering point will grow quickly, so remove them before they seed themselves everywhere. Deadhead plants after rain, especially petunias, whose lovely flowers become very soggy if wet and can cause mould to form if they drop down on to the top of the soil. Pelargonium heads suffer too, so take the flower stems off right back to where they grow from the main stem, where they will break neatly and sweep up any petals as they fall, especially the red ones, or they might stain your tiles and surrounds.

Hemerocallis and tulbaghia flowers are open fully now and add some glamour to the garden. Agapanthus (below), for some a tricky plant to flower, needs feeding after flowering and again in spring. Some say that in order to flower they need to be crowded together in a pot, and they can sulk for a year or two after being split up and re-potted. Choose a fertiliser with a low first number (nitrogen) or they will produce many leaves and few flowers. Although they come from sunny countries, avoid growing them in full sun here, as the strap-like leaves will burn. Remember to dead head these plants as they go over just as you would any other garden flowers. When hippeastrum (amaryllis) bulbs have finished flowering cut off the dead flowers, leaving the stem intact. Water whenever the soil is dry and feed with a general fertiliser until late summer. Then, let the compost dry out and remove any remaining leaves to let the bulbs rest. 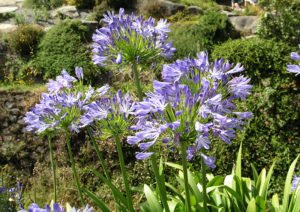 As the outer leaves of irises begin to turn brown, take them off gently by pulling them away from the base of the plant. Then in a couple of weeks cut the remaining leaves into a ‘V’ shape which will allow the sun to bake the rhizome, helping the plant prepare for next year’s flowers. Strew some bone meal around the base area or if you can’t get that, use a fertiliser, which is heavy in Potassium.

Gazing upwards, the lavender jacaranda flowers, looking like hazy blue clouds, are the highlight of my gardening year. The startling yellow flowers of the Caesalpinia gilliesii (below)  from tropical America, with the long quivering bright red stamens is also something to look forward to and if the dying flowers are removed, then later on another flush of flowers will delight. The perfumes of honeysuckles and jasmines mingling with the heady scent of ‘Pakistani Nights’, Cestrum nocturnum, (see Plant of the Month) linger on the night air well after bedtime, reminding me of nights in tropical stations.

Shrubs that flowered in early spring may need some trimming now. Lavender and rosemary come to mind here, as the branches of rosemary will lean outwards if allowed to grow too much. Lavender should be cut back after the flowers have died off. You may find that topiaries and hedges need a trim, which should be done little and often, so that it doesn’t become a major job.

As summer temperatures rise keep a watch out for any salad vegetables that you grow when sudden bursts of very high heat can cause them to bolt, when the centre of the plant shoots skywards. Tomatoes like water at their roots, so sink an old plant pot into the ground beside each plant and water through that. Sometimes tomatoes don’t ripen evenly here, as we can’t control the temperatures in the garden, as those who grow in greenhouses can.

Remember your hanging baskets and planters as the temperatures rise. These plants are totally dependent on you for their sustenance and need extra care during these next hot months.

PLANT OF THE MONTH Cestrum nocturnum

This native of the West Indies is the quintessential night-scented plant. The heady perfume given off is evocative of hot tropical nights in faraway places. Sometimes known as Night Jessamine, Lady of the Night, Queen of the Night or even Pakistani Nights, the powerful perfume emitted at night is said to be the most fragrant in the plant world. Discovered relatively recently (late 1800s), it is a much loved plant now established in hot countries around the world, although in some places it is regarded as invasive, and plans are afoot to eradicate it. Cestrum nocturnum is an evergreen woody ornamental shrub growing to around 2 metres with narrow, lanceolate, glossy leaves. The tubular flowers can be greenish white or even pale yellow and remain in a semi-closed state until evening when they open fully in order to release their perfume. This can be so strong that people with respiratory problems may find difficulty in breathing. This plant is a member of the Solanum family, so be aware that the berries may cause illness if ingested and wash hands after touching any part of it. 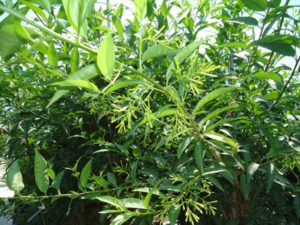 Preferring a very sunny spot in light sandy soil, cestrum should be fed regularly with a high- phosphate fertiliser, thus encouraging plenty of flowers to appear. Grown as a pot plant, it may outgrow the pot very quickly. Water only when the soil has dried out, as the plant dislikes waterlogged roots. However, if night temperatures drop significantly the plant should be moved into a more sheltered place. Pollinators are usually moths or in some countries hummingbirds, but as the common names suggest it is the perfume of the flowers and not their beauty that attracts them. Purplish berries follow pollination, but it is better to propagate the plant from non-flowering green shoots as they appear.

Demolition of an illegal building