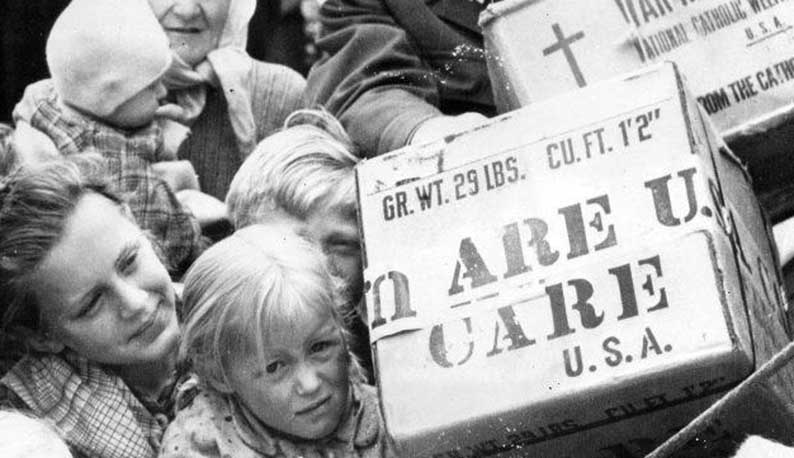 CARE food packages are a welcome gift to the families burned out in a recent fire in Lessach, Austria. Here, Rev. Franz Esthofer, Pastor of Lessach, receives the packages from Chaplain (Major) Edward J. Saunders, Salzburg area Chaplain. The parcels were distributed as gifts from the American Women's "Good Will to Austria" Committee.

I WAS born on the Mediterranean island of Cyprus in 1952. At that time, Cyprus was a British colony. In 1955 the Cypriots started an uprising against the British aiming at independence. In 1960 Cyprus became a free country and a member of the United Nations.

Around that time, I was attending elementary school in a village close to the city of Limassol, located on a hill, about 2km away and overlooking the Mediterranean.

Two separate events from that period will remain indelible in my mind. One was the friendly visit of the American war plane carrier “USS Forrestal”. I remember standing in the school backyard and watching this massive structure floating on the Mediterranean waters. I was ecstatic! I did not ask then as to what was the purpose of the visit.

My second recollection was related to our daily breakfast at school. All attending children, about 200, were enjoying a hot milk beverage every day made from powdered cow’s milk. This was coming in big bags with a sign, ‘Powder Milk: a gift of the people of USA’.

I drank this milk every day but I never asked the question “Why are the Americans feeding us breakfast?” I later understood that it was a gesture of goodwill, for the children of a newly-formed and, understandably, poor country.

I also came to learn that this, and other similar gestures, were not unique to Cyprus. The US was providing, and still provides, to a lesser extent, help to numerous nations in need. I cannot say, and I will not dwell on the question of whether this action was a political strategy to buy respect from other nations, or a genuine effort to help those in need, especially children.

In ensuing years, I never forgot the daily cup of hot milk and I developed affection for the US. When I reached 50, and became an established researcher in Canada, I decided to compete for a job in the  US. I clearly remember my motivation. I wanted to be part of this great and generous country, and maybe even pay them back for my hot milk from 40 years ago.

Finally, this did not happen but my affection for the country was never diminished. I believe that there are millions of people out there who got some help from the US; a cup of hot milk, a glass of clean water, a scholarship, a vaccine against malaria, a drug for AIDS, the building of a hospital or a school.

I doubt that the American public is fully aware of their contributions but I suspect that if they are, they would feel proud. What did the US get in return? Certainly not money. They got affection, respect and admiration and maybe some political leverage.

This American way was the norm for decades and I believe it helped to elevate the US as the undisputed leader of the free world, whatever that means. Notwithstanding America’s mistakes in various political arenas – I will not get into those – the actual fact is that this country enjoyed respect and admiration from millions around the world.

This situation is now changing dramatically. Under the slogan ‘Make America great again. We have seen that America is now opening countless grievances around the world, including with its neighbours and traditional friends Canada and Mexico, the citizens of the latter being stereotyped as gangsters, rapists, drug dealers and killers.

Under the slogan that ‘China, Mexico and other countries steal our jobs’ there is a nasty campaign of blackmail: “If you don’t pay for the wall we will cancel NAFTA’ for example, and an open war on trade and tariffs.

America may, in the end, have the means to defeat all of its competitors in trade and bring more prosperity to themselves while diminishing the prosperity of others. This is a feasible goal; but is it a desirable goal?

Naturally, America will be richer, but it will be hated for its greediness. Maybe the Trump campaign got it totally wrong after all. Instead of ‘Making America great again’, the goal should be to be ‘Making the world great again’ through peace, tolerance and global prosperity.

Let us not forget that we are all the same species. America can do a lot for the world from providing breakfast to poor children to finding fresh water and building wells – not walls.

By doing so, America will become an admired nation again and remain the sole and undisputed leader of the free world. What is the cost of a nation being a beloved world leader? For me, it was the cost of a hot cup of milk when I was eight years old. For somebody else it could be glass of clean water, a scholarship, an AIDS-fighting pill or a vaccine. These are relatively small contributions for winning respect and love. The alternative is for America to become richer but universally hated. Obviously, President Trump is using this exact reputation he has in business to build the new America.

His short-sighted goal is to make more money at any cost, with the help of the ‘best’ lawyers to defend him. If he continues this road, the world must seek and find other nations who are ready to lead by being generous, not greedy. After all, I did not enjoy my milk 40 years ago because it was American. I enjoyed it because I was in need and somebody happened to provide it. Unfortunately, it may be too late by the time the Americans realise that buying my affection for a cup of milk was a great bargain for them.

The goalkeeper’s fear of the penalty