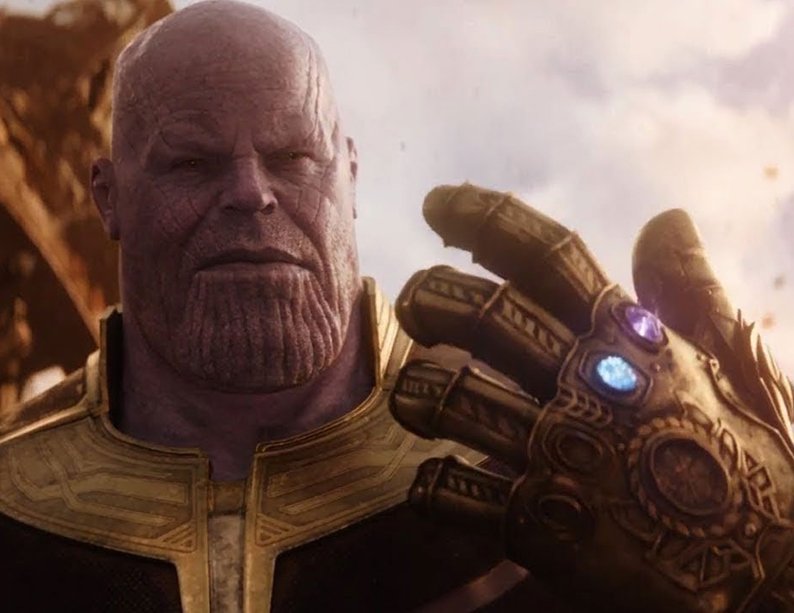 The aim of Thanos, the villain was to destroy 50 per cent of the people in the universe in order that the remainder could survive

FOR MANY years now there has been an undercurrent of criticism of how the movies  have become increasingly violent and confusing because now the baddies are often justified, and basic human standards challenged.

Worse still, violent, ugly movies have been made, with horrid scripts and revolting scenes full of blood and guts. More disturbing they have been introduced into the home through television and even worse, children’s programmes are often violent with scary scenes, including even Kung Fu Panda (the prison scenes) and even Scooby Doo. With Fox exceeding all, one violent series following another, and with the Walking Dead being the ugliest and most violent, Something is clearly wrong but Hollywood is raking in the money.

Two weeks ago I went to the Mall with my granddaughter to go to a movie and none of the movies looked very attractive, but in desperation we chose the latest in the series Avengers Infinity Wars (2018)  because at least we knew the superhero characters; Spiderman, the Hulk (who failed to appear), Thor, Iron Man and others. I did not notice that the film had a glittering cast with some of the best actors in the world, but you would not have realised that from the end result. The actors names were exploited but the script did not allow the quality of the actors to show.

It was the worst film I have ever seen, because of the plot (or rather lack of one), the justification for killing half the universes population (not just our small planet Earth), but also the violence ,and the terrible script. Two particularly annoying factors were the illogical placing of African technology from the 18th Century (i.e. spears up against the technology of future centuries) and the antics of Spiderman in space.

The film was full of special effects not all of which you could understand or justify, and immense cruelty, with the bad guys becoming the good guys by killing half the population of the universe, to save the other half from overpopulation. In short there are no ethnical principles in such films, not even basic ones of rule of law, respect for life, social justice, and the discouragement of crime.

Thanos the terrible killer in the final scene is depicted as the saviour of the universe, by killing billions of people (intelligent beings) irrespective of status, influence , or rich or poor, and a fighter for social equality.

A few days later I read that the film had broken box-office records immediately on its release, and amassed one billion dollars in 15 days, a massive profit for Disney since the most expensive movie in history ($400m) brought in $2 billion. Clearly money rules.

As an economist I was intrigued by the plot which was based on the essay of Thomas Malthus in 1798, who wrote on population, predicting that the natural tendency of population is to grow faster than the food supply. Consequently, the available per capita food supply would decline over time, putting a check on population.  Following from which one could conclude that over time population growth was non-sustainable.

In the Avengers Infinity War 2018 the aim of Thanos, the villain in the beginning of the film was to seek power and destroy 50 per cent of the people in the universe in order that the remaining population could survive. In the end this was achieved and 50 per cent of the people were dissolved in the wind. Thanos then declared that the deaths were impartial and were independent of class, power or wealth, thereby presenting himself as the saviour. Therefore he who killed hundreds of millions was a hero, implying that those who fought him were the criminals.

Malthus’s analysis was also the basis for the plot in the 2016 film ‘The Inferno’ whereby a billionaire biologist takes it upon himself to kill a significant portion of the world’s population by developing a virus that can kill millions. His plot was discovered and there were no mass killings. The film was panned by the critics in contrast to the praise for Avenger Infinity, even though the former was a much better film and it was the good guy who was going to save the population of the future except he fails in his efforts and dies. Based on a Dan Brown book it’s a better and more realistic movie Avengers Infinity. It cost only $70m but only generated revenue of about $130m.

Though there is some disquiet about the population growth over the past 200 years, most economists consider that  Malthus’s fears were not justified.  The famous economist Jeffrey Sachs, who was in Cyprus last week to talk on climate change, in paper published in The Sciences in 2008 entitled ‘Are Malthus’s Predicted 1798 Food Shortages coming true?’ stated that although for 200 years  economists have contended that Malthus overlooked the gains from technological development, the fall in birth rates with education and development, and the general increase in welfare. Many economists have argued that a large population is needed for development, for among other factors it increases the number of geniuses.

Jeffrey Sachs concludes that the that since Malthus’ population has grown from 800 million to 6.7 billion, and yet the gain in income levels has been much higher. In fact given that the area of land is fixed, it is amazing how agriculture has responded. In his secondary title to the paper he states: “It remains to be seen whether Malthus’s famously gloomy prediction is truly wrong or merely postponed”. Yet he proposes that the world population should be stabilised at around 8 billion, and emphasis be given to renewable energy sources, healthy diets and lifestyles, and respect for the world’s natural resources. He implies that climate change should be addressed in policies, but does not spell it out, focusing on renewable energy and efficient use of water and resources. His paper was written before President Donald Trump came to power in the US, and promptly left the Paris Climate Change Treaty. It would seem that today Malthus’s prediction is relevant, but in my view the most important change human beings need is good political leadership, and that is a rare commodity.

Costas Apostolides is a founder member of Pax Cypria Cyprus Institute for Peace.

The eighth and the sixth

For the price of a cup of milk