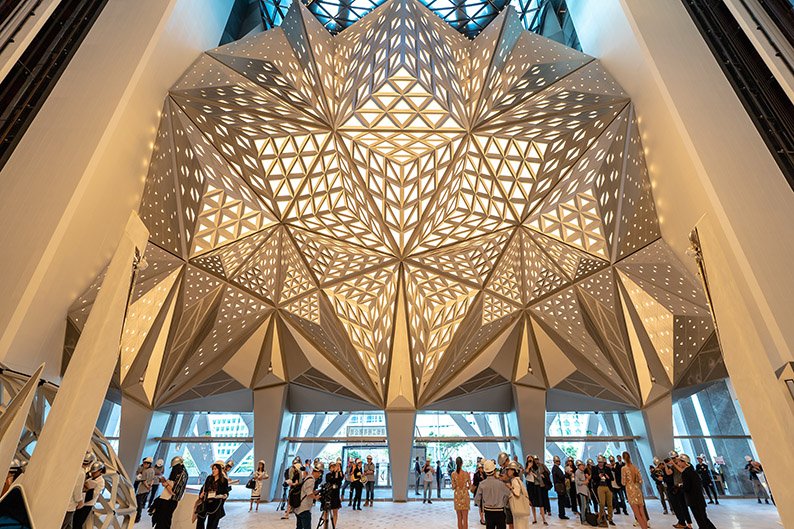 THE official ground-breaking ceremony for the much-anticipated casino resort complex that is due to open west of Limassol in 2021 will be held on June 8, and a group of Cypriot journalists were taken to Macau recently to get a better understanding of how Melco Resorts and Entertainment, a partner in the Integrated Casino Resorts Cyprus Consortium which has the contract to build the Cyprus resort, run their operations in other countries.

As well as several venues dubbed the City of Dreams in Macau, which feature various entertainment options, an array of different types of accommodation, regional and international dining spots, designer brand shopping and, of course, a huge casino, the company has operations in the Philippines and Russia, and is hoping that the Cyprus resort will tap into the lucrative Middle East market.

Melco CEO Lawrence Ho estimates that, as well as attracting an additional 300,000 tourists a year to the island, the €550 million City of Dreams Mediterranean is expected to account for about four per cent of Cyprus’ GDP and create around 4,000 jobs annually during the construction period. When it is fully operational, the casino will generate approximately 4,500 direct and indirect full-time jobs.

The trip to Macau included a visit to the new flagship hotel for the City of Dreams complex, scheduled to open on June 21: the eye-catching super-luxury Morpheus hotel, designed by the late Dame Zaha Hadid. The building is the world’s first free-form exoskeleton high rise building with sculpted voids and featuring two sky bridges, five different glazing systems and a non-repetitive doubly-curved aluminium cladding. It is, frankly, extraordinary, and reflects Lawrence Ho’s mantra of “can we do this better?”

The first thing that strikes you when you arrive in Macau is the glitz: we arrived at night, and the whole city is a glare of garish lights – huge high-rise buildings illuminated from top to bottom, inside and out. We stayed at Studio City, a hotel/casino at the end of the strip surrounded by construction sites (yet more buildings in the offing). The suites are located in the ‘Star Tower’, and the rooms in the ‘Celebrity Tower’. The facilities are five-star and include a Spa that boasts a ‘snow room’ for after your sauna, extensive designer brand shopping malls running around the edge of the building and a large children’s play area with rides and interactive games. Then there’s the Batman 4D Dark Flight and the Golden Reel – the world’s highest figure of 8 Ferris wheel on the front of the building. At the heart of the hotel is the casino, an enormous room packed with baccarat and roulette tables and literally hundreds of slot machines.

The layout of the other hotels in the City of Dreams is similar: at the core are the gaming rooms, accessible from entrances on every side of the hotel, so you are never too far from having a flutter whether you are shopping, eating or just wandering around. The dining options are many: each hotel has a Michelin-starred restaurant (some have two) and it’s clear that the clientele expect the best – and are willing to pay for it. The Cyprus consortium also aims to proffer Michelin-starred dining.

The entertainment offered is high tech, like the Batman Dark Flight, whooshing you through the streets of Gotham City battling the Joker and the caped crusader’s other enemies and the House of Dancing Water, the world’s largest water-based show with a pool that holds 17 million litres of water (that’s more than five Olympic-sized swimming pools).

It’s an extraordinary show with acrobats, dancers, divers and motorcyclists performing stunts in this theatre-in-the-round, where the stage is sometimes deep water (the divers at the end leap from a 24-metre-high platform) and sometimes a solid floor, which appears and disappears thanks to eleven hydraulic ten-ton elevators underneath. Performers are winched from the ceiling or fly in from above on bungee-style ribbons or appear from under the water, with the spectacle enhanced by special lighting effects and some 240 fountains which rise up to 18 metres.

Wherever you go in this area of Macau, everything is “bigger” “better” “higher” “brighter”. You certainly need a head for heights looking down from the upper floors of these towering hotels, and the guests seemed uninterested in the swimming pools and outdoor facilities, spending their time in the air-conditioned interior – and, of course, the gaming rooms, which never close.

The brief glimpse we got of old Macau city centre was a world apart: architecture harking back to the Portuguese colonial times and tiny, busy shops jostling for space in charming narrow streets, a far cry from the brash boulevards of Cotai where the casinos are located.

When I spoke to Lawrence Ho I asked him about the necessity of taking local culture into account when he built a new casino, and he agreed it was important. He told me that the Cyprus complex will draw inspiration from Greek mythology: “that’s always very important to us” he said “because we never cookie-cut anything. We are very respectful to the local cultures and also, our guests, when they want to go to a new destination, they don’t want to see the same thing every single time”.

The pros and cons of legalising this type of gambling on the island have been discussed at length since the licence was granted and those in favour point to the jobs it will create and the revenue it will generate. I spoke to the Executive Vice-President & Chief Officer, Human Resources of Melco in Macau, Akiko Takahashi, who enthused about the company’s care of its employees. She explained that Lawrence Ho had “a tremendous commitment to the concept of people” and added “we demonstrate the commitment to people in many things that we do – whether it’s their experience at the heart of house” (ie behind the scenes) “or their internal career opportunity where they feel that they come in for one job but they certainly have the opportunity to progress their career throughout the resort”.

The ‘heart of house’ we visited revealed easy access for job seekers to find what was available, a room where their uniforms were kept after cleaning and whisked on a conveyer to each employee upon a swipe of their card, changing rooms with lockers, a staff canteen where there is a wide choice of meals provided free and adjoining rooms for resting or sleeping and one with rolling movies (this was, after all, Studio City with its Hollywood theme).

Those against gambling often talk about families made destitute by gambling addiction, and when I raised this point I was assured that problem customers can be banned from entering if the family requests this.

City of Dreams Mediterranean will include 136 tables and 1,200 gaming machines, a five-star hotel with luxurious villas and 500 hotel rooms, 11 restaurants and cafeterias and 9,600 square metres of facilities for meetings, conventions, and events. It will also include a 1,200-sq. metre retail area, ‘replicating the streetscape of the old Nicosia city centre’.

It is set to start operating in 2021. In the meantime a temporary facility will open in Limassol this summer followed by satellite casinos in Nicosia, Larnaca, the free Famagusta area and Paphos.

‘Changing the face of Limassol’