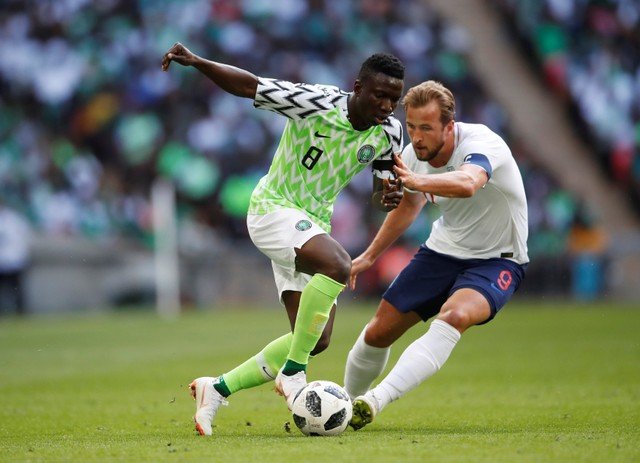 England manager Gareth Southgate was delighted with his side’s performance in a 2-1 win over Nigeria but Germany’s Joachim Loew was angry after the world champions suffered a historic loss to Austria in Saturday’s World Cup warm-up friendlies.

Four other World Cup finalists failed to score between them as European champions Portugal drew 0-0 in Belgium and the Scandinavian derby between Sweden and Denmark also ended goalless.

Germany’s 2-1 defeat in Klagenfurt, which saw Manuel Neuer play his first game for club or country after a nine-month injury layoff, was their first against their smaller neighbours — who have not qualified for Russia — for 32 years.

Although Loew was happy at Neuer’s return, he was not at all pleased with his team’s overall effort.

“Of course, the defeat angers me,” he said. “We lost too many balls which normally doesn’t happen with us… a lot of things were bad today.

“I learned some important things from the game. We have a lot to improve over the next 14 days.”

Mesut Ozil capitalised on a dreadful clearance by Austria goalkeeper Joerg Siebenhandl to give Germany an early lead. However, second-half goals from Martin Hinteregger, who met a corner with a stunning far post volley, and Alessandro Schoepf turned the game around.

England capitalised on an error-strewn first-half performance by Nigeria as Gary Cahill and captain Harry Kane put them ahead before Alex Iwobi pulled one back for the Super Eagles.

“That was as good a half as we’ve had,” said Southgate.

“We used the ball well and we were a threat. I liked the interchange of movement and passing between our front four.”

Nigeria coach Gernot Rohr said his side could have conceded half a dozen goals before halftime.

“What we saw in the second half was very positive,” the German said. “We cannot play like we did in the first half.”

Brazil coach Tite said that forward Neymar would play his first game since February, when he fractured a metatarsal during a league game for Paris St Germain, in Sunday’s friendly against Croatia in Liverpool.

He said Neymar would come on as a second-half substitute.

Tite criticised team sponsor Mastercard, telling the credit card company that an offer of charitable donations in return for goals by Neymar and Lionel Messi was not helpful in a team sport.

Mastercard last week announced they would donate the equivalent value of 10,000 meals to the United Nations World Food Programme (WFP) every time Argentina forward Messi or Neymar scored a goal for either club or country.

However, Tite said: “This donation to charity is… beautiful and it’s grand. Just as it would be a grand gesture you giving food if any Argentina or Brazil player was to score a goal. We work here as a team and these gestures can be a bit frustrating.”

Belgium defender Vincent Kompany hurt himself as he lunged for the ball and left the field in the second half of the match against Portugal, who rested captain Cristiano Ronaldo but were encouraged by a lively performance from Bernardo Silva.

Sweden striker Isaac Kiese-Thelin spooned a late shot over the bar with the goal at his mercy at the end of a feisty friendly against Denmark featuring plenty of direct football and a few meaty challenges.

A garden that you can enjoy