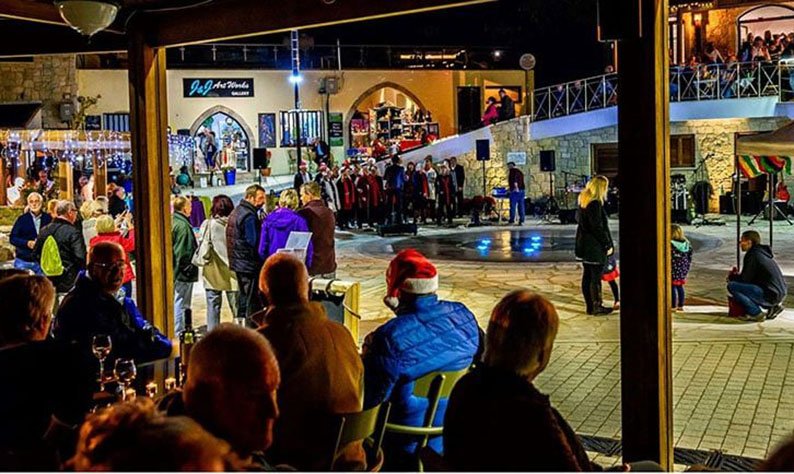 Concerted efforts to encourage people to visit the recently-upgraded Tala Square have suffered a blow after a string of planned events were cancelled by the local authorities, according to organisers.

Dutch ex-pats artist Joep Klinkenbijl and jewellery maker Johanna Bey, live in the area and came up with the idea of organising regular musical events to encourage people to visit the heart of the popular hillside village.

The village centre was revamped as part of a wider upgrade for the area.  The square was pedestrianised and modernised and the upgrade included a colourfully lit water fountain, flower beds being created in the square, new lighting installed and uniform pergolas added for businesses.

The first event was hailed as a huge success, the ‘Christmas Square Affair 2017’, a collaboration with their Tala business, J & J Artworks Gallery, and Tala community council.

It saw around five hundred people descend on the square creating a buzz.

Klinkenbijl told the Sunday Mail: “I received signed and stamped permission from Tala council in February to organise regular musical events in cooperation with one of the councillors, as long as it finished before 10.45pm to respect residents,” he said.

However, on March 21 after booking a slew of acts for eight upcoming events in 2018, he received a second letter which revoked Tala council’s permission to hold the events, citing a new law aimed at reducing noise pollution and a meeting with police who said that only village events for religious festivals such as Easter and Christmas would be permitted and that live entertainment would only be permitted at amphitheatres.

But a spokesman for Paphos police told the Sunday Mail that this wasn’t the case and that in such cases, permission must be applied for from the Paphos district office who may then request an opinion from the police. “There is a procedure to follow. It depends on many things if permission will be granted such as what type of event it is, what time it is and so on.”

“Talking generally, if a somebody wanted to organise an event that involves loudspeakers then the community council can’t give this permission, the individual needs permission from us and we consult the police authorities – it will be an objection or consent, We do give permissions for such musical events, if the area is suitable. Nearby houses shouldn’t be disturbed by noise for example,” she said.

The Paphos district officer noted that although there is a new law in Cyprus concerning noise pollution, it has yet to be enacted and it would be a big help for authorities. In particular, she mentioned the use of decibel metres in order to monitor the sound.

“We are hoping that it will come into effect next year as there are difficulties for all trying to control sound levels.” She added that in the case of Tala, there is an amphitheatre which can be used for events but didn’t completely rule out the use of other spaces in village and communities.

A Tala resident that spoke on condition of anonymity said that he believed vested interest were behind the current situation.

“Obviously the council members are all from the area, there is a conflict of interests on many occasions and I think this is one of them. The council members are not all organising the events, instead only one is along with a resident is with an expat couple. This speaks volumes,” he said.

Paphos resident John Watts attended both of the Tala events and said that such events are important for communities with suitable spaces. And although the square has been revamped at a huge cost, it remains deserted. “It looks lovely, it’s such a shame,” he said.

Watts said the events had created a buzz, which brought people of all nationalities together.

“Once in a while, if all of the proper permissions are in place, events like these should be encouraged, I don’t know why it’s a problem,” he said.

The head of Tala community council Areti Pieridou said: “We have no authority to issue permission for music events on council property such as the square. We can only do this when it’s in the community plans such as Christmas or Easter. We will have a Christmas celebration again this year, hopefully,” she said.