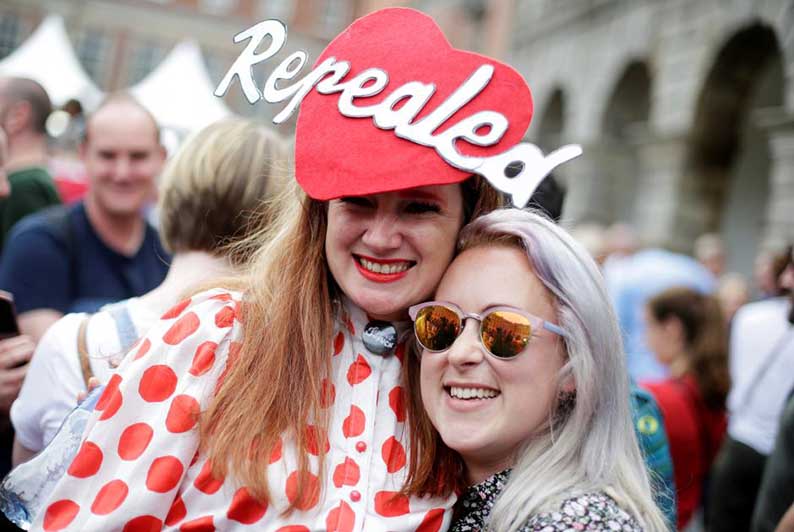 IN MY time, Roman Catholic primary school youngsters had two sets of tables drummed into them; the one and one makes two kind, and the heavier ones that arrived in tablet form – the Ten Commandments. The commandment you thought you’d have to fear most when passing St. Peter’s stern gaze was Thou shalt not take the name of the Lord in vain…which many Irish RCs do – ad infinitum. How many of us contemplated scrutinizing with pained intensity at some stage in our child bearing years – Thou shalt not kill?

The Irish referendum on May 25 on the Eighth Amendment dealing with abortion restrictions, showed that Ireland is casting away the dominance in Irish social life of The Church, which for centuries, has laid down morality law to a State which tipped its obedient forelock and said, ‘Aye, aye, will do.’

Ireland was at the forefront on several important issues in recent years, gay (marriage) rights for example, Prime Minister Leo Varadkar is gay, and the cutting out of plastic bag usage, pretty good for a small country not that long ago considered conventionally backward.

The UK has long been the place to run-to for what Irish laws or The Church deigned sinful or forbidden. Irish authors thrived in Sassenach freedom of expression and became famous after which, the home country was happy to claim them. Edna O’Brien, a trailblazer for female (Irish) writers, was given a bit of a journalistic tongue-lashing for accepting the title ‘Dame of the Empire’. While ‘empire’ has understandably nasty connotations for the Irish, Edna would be churlish to decline an honour lavished on her from the country that gave her a hoosh into fame, when some narrow-minded people at home were burning her books because they openly dealt with sex.

I love Ireland, don’t doubt that. But being blind to your country’s faults does not make you a patriot, it makes you complicit when there is a need to speak out. Certain types of Christians seem to think they exist to wield a verbal sword like a vengeful arc angel in the name of their God, forgetting a few simple phrases given by Christ – Judge not and you will not be judged… Let he who is without sin cast the first stone, and Love they neighbour…warts and all! And, most importantly, don’t Christians believe that God gave man free choice? Each has to face his/her own God, his/her own conscience. You wouldn’t bash into your neighbour’s kitchen and demand they cook what you insist on for lunch. Much less is the right anyone has to demand a person’s moral rights should be chained to their way of thinking alone on far more important issues because they feel they are better Christians.

I would have voted yes for women I know who suffered from the restrictions the Eighth and its familiars imposed on them. I’d vote for one young woman who knew with certainty her baby had no hope of being delivered alive. She begged, even as it was known she was in danger, to be allowed to abort and was refused; the heart was still ticking if feebly. She went to England, had an abortion that was terribly traumatic, and with most of those who could have supported her far away. I’d vote yes for my relation who, after three stressful and dangerous deliveries, was told by her doctor, ‘Another baby and you will most certainly not survive to see it grow.’

Her husband took her to their priest to ask if she might be allowed take the contraceptive pill, then a recent aid. He told them, ‘You are in God’s hands. If He decides who will live, so be it.’

‘And who will take care of our other children?’ her furious husband enquired.

‘God will provide.’ Was the answer he received but he wasn’t convinced. Back then fishermen who crossed the sea to parts of the UK used to bring back contraceptives and pills, so solutions could be found that could not be confessed.

The Vatican expounds the right to life for the unborn baby, yet I doubt if it has offered actual support even with its enormous financial resources for all the children it insists be brought into the Catholic fold. What has changed Ireland and, mostly, its youth? Scandals and corruption in which some of the men that preached to and brainwashed the Irish, were worse sinners than those they admonished for their sinful ways. Paedophile priests who terrified kids with talk of hellfire and devils, abused and destroyed the lives of so many under the blinkered gaze of the Vatican and its servants who forgave and moved the sinners around from parish to parish with no thought for the children they would surely continue to damage. The Church has revered men in its hierarchy who worried more about having to lose priests at a time when the ‘calling’ wasn’t calling all that many, than about children losing childhood innocence while sinking into self-loathing and guilty, lonely terror.

Then there were the Magdalene Laundries, mother and baby homes where nuns, brides of Christ, treated ‘sinners’ in ways that would have made Jesus weep in shame at how His teachings were mismanaged in the name of his female disciple after whom those hideous hell holes were ambiguously titled.

Shame has been the weight that has held Irish Catholics down for so long. The young now refuse that burden when not led by good example. There will probably be abuse of the changes that will come; there are those for whom it will serve as mere convenience. There will also be those who won’t take advantage, like a relation of mine who has a wonderful Downes Syndrome boy that another woman might have aborted. He is loved and cherished. The point is choice and the free will in which a woman can make her own decisions with regard to her body and her life and not be told by men what her choices are.