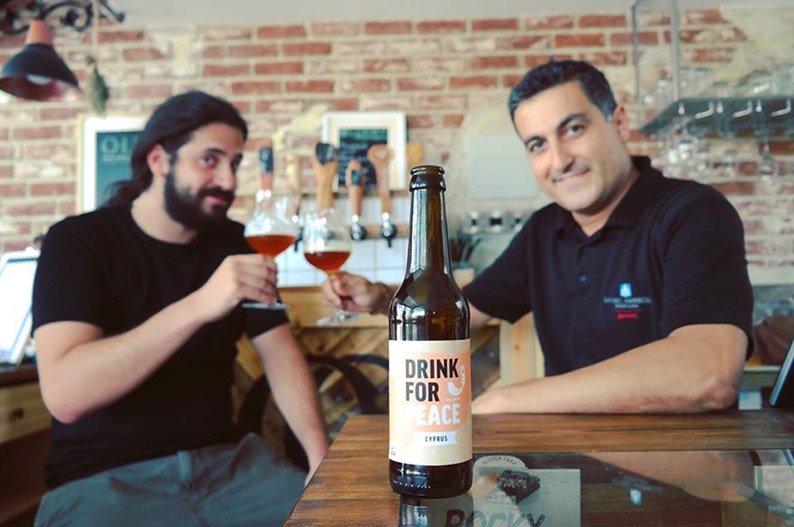 Costas (left) and Ogun toast to their new recipe

There have been many things touted as catalysts for a solution to the Cyprus problem over the years from the EU to oil and gas, both of which have had the opposite effect. Now there is beer, the result of an innovative bi-communal project, which will soon be available all over Cyprus.

The ‘Hoppy Wheat Ale’ can already be bought in the north of Nicosia, and in a few months will be sold at the Home for Cooperation in the buffer zone as well.

The idea comes from ‘Drink for peace’, an initiative which brings together brewers in divided countries, producing what they call “the most peaceful beers in the world”.

The Germany-based group has collected recipes from Bosnia Herzegovina, Israel and Palestine before targeting north and south Cyprus.

They first contacted a couple of Cypriot microbrewers – brewers who independently own equipment for brewing and produce small amounts of beer – a year ago.

Costas Siahinian who manages the pub Brewfellas was one of them, and health food shop owner Orcun Cananoglu the other.

Costas was skeptical about the project in the beginning. “I didn’t know the people [from Germany] and what exactly they do with the beer and the profit,” he said.

Nevertheless, the pub owner, who has friends from all over the island, was ready to work with fellow craft brewers Ogun and Orcun, whom he knew, and together they came up with a recipe for the project.

“It is a pale ale which is not common for the Cyprus market,” Costas, 32, explained. “We wanted to give it a Mediterranean flavour, a lemony zest.”

This they achieved by using aromatic hops in addition to the yeast and malt. And, as the Germans say on their website, the fourth ingredient is tolerance.

After collecting the recipes from the brewers, the crew from Germany also filmed in the country and use the footage on their web page to make people aware of the political situation.

The brewers got to decide where 50 per cent of the profits should go in their country and chose the Home for Cooperation. To help spread the word, on their Facebook page the six Berlin-based members of ‘Drink for Peace’ have published a short film about what the Home does to bring people across the divide together.

Two months after they handed over the recipe, Orcun and Costas received a crate of the beer each from Germany, the first of the production.

It is now sold in bottles online at https://www.drink-for-peace.com/ and also at O-Live, so far in kegs, as the final label for the bottles for Cyprus has not been decided yet.

When it is, the beer will be available at the Home of Cooperation as well.

According to Orcun, who sells it at O-Live, it is already popular with Cypriots because of its “summery” taste.

In Germany, initiator of ‘Drink for peace’ Samir Kadunic said, there hasn’t yet been any profit from the sale, but 1,500 bottles have already been sold, mainly online. He is not that worried about the profits, as he explained, the main purpose of the enterprise is not making money.

“We all do that besides our jobs,” he says about the six people involved. “We chose brewers because they are usually very open. The ones from Cyprus already knew each other, and we just wanted to give a positive example of people who are ready to work together across the divide.”

Orcun for one would like to take the project one step further. So far, the beer, though a recipe by the Cypriots, is being produced with German ingredients according to the specifications agreed with ‘Drink for peace’.

“We would like to make a 100 per cent Cypriot beer,” he said. “With malt and hop and water from all over Cyprus, and we would label it in three languages.”

Church service held in Lefkoniko for first time in 44 years