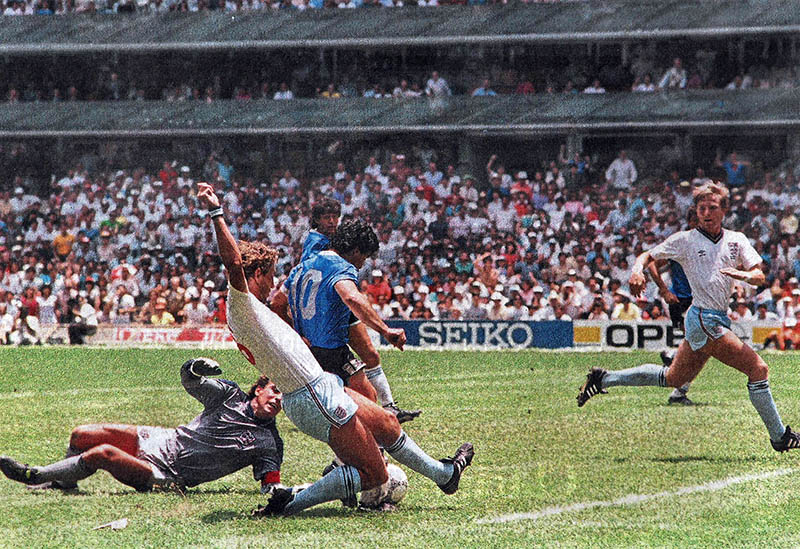 The tournament was in doubt just eight months before kick-off after 20,000 people were killed in an earthquake, but the stadiums were not affected and the event went ahead.

FIFA again changed the format, the two-phase group stage used since 1974 was dropped and replaced by a knock-out competition. In order to ensure fairness the final two matches in all groups would kick off at the same time.

Matches were played at high altitude and in sweltering heat at noon and 4pm in order to maximise global TV audiences.

The 1986 edition will always be remembered as Diego Maradona’s World Cup. Seldom has a player, even Pele, so dominated the competition.

His magnificent solo goal against England in the quarter-finals brought back memories of what football used to be like among kids in the streets – one player running circles around others, but it was his handball, which he later attributed to the ‘Hand of God’ in the same match, that is still talked about to this day.

West Germany, like France and Brazil, kept faith in ageing superstars. Karl-Heinz Rummenigge, Michel Platini and Zico all felt they had the ability to shine in one more World Cup, but only Platini came remotely close to his old standards.

Uruguay’s Jose Batista received the quickest red card when he was sent off in the first minute for bringing down Gordon Strachan in a game against Scotland, while Paraguayan coach Cayetano Re was the first coach ever to be red carded.

It was also the first time that most television viewers around the world got their first glimpse of a crowd performing the ‘Mexican wave.’

Gary Lineker’s six goals made him the first English top scorer in a World Cup.

The 1986 final was between Argentina and West Germany and was held at the magnificent Estadio Azteca in Mexico City with an attendance of 114,600.

The South Americans took the lead in the 23rd minute through defender Jose Luis Brown, with Jorge Valdano doubling their advantage ten minutes after half-time.

Superstar Karl-Heinz Rummenigge scored his first goal of the tournament in the 74th minute as West Germany halved their deficit, and they were level six minutes later through Rudi Voller.

Argentine superstar Diego Maradona was heavily marked by Lothar Matthaus throughout the match, but the little genius picked out a peach of a pass to Jorge Burruchagha to score the winner with six minutes remaining of a highly-entertaining game.

After winning the tournament in 1978, Argentina now celebrated their second World Cup win in three tournaments, with Maradona’s personal contribution being five goals and five assists.

Defeat meant German manager Franz Beckenbauer gained the unwanted distinction of having lost a World Cup final both as a player and a manager. (Beckenbauer had played in West Germany’s defeat in 1966.)

However, four years later he led Germany to the title as he became a World Cup winner as both a player and manager (he won as a player in 1974).

Six yellow cards were issued in the final, which was a record number until the 2010 final.

‘The most peaceful beer in the world’