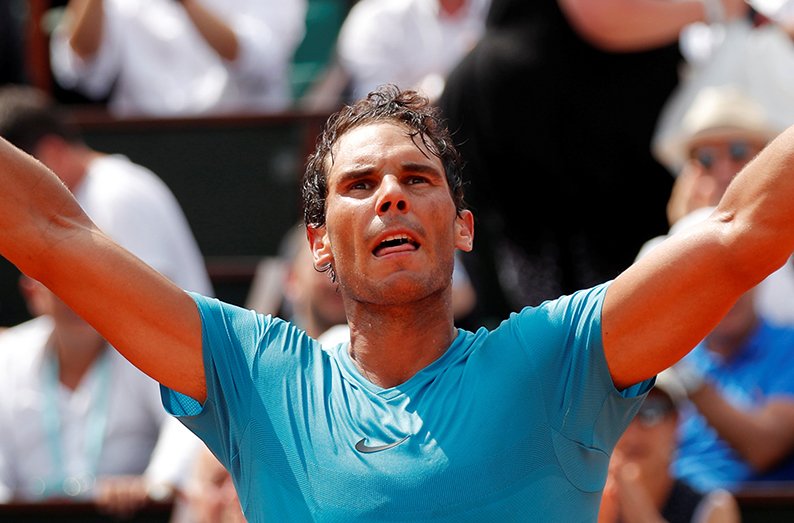 Maximilian Marteter probably wondered what all the fuss was about when, two games into his first match against the best claycourt player ever on Monday, he led French Open champion Rafael Nadal 2-0 on the Spaniard’s favourite patch of red dirt.

The German youngster quickly discovered just what it feels like to be on the receiving end of a pummelling by the Spaniard though, as Nadal swept to a 6-3 6-2 7-6(4) victory to reach the quarter-finals in Paris for a 12th time.

In doing so, 10-times champion Nadal extended his current streak of consecutive completed sets won at Roland Garros to 37.

Only Bjorn Borg (41) has a longer streak and the way Nadal, who celebrated his 32nd birthday on Sunday, is devouring the opposition it is hard to see who can stop him.

Next in his sights will be Argentine Diego Schwartzman, who came from two sets down to beat Kevin Anderson.

Left-hander Marterer, ranked 70th in the world but rising fast, could not have wished for a better start.

As if to give him a helping hand on his Court Philippe Chatrier debut, the tennis gods gave him a flukey netcord and a Nadal double-fault to break in the opening game before he held on in confident fashion with a couple of juicy winners.

Marterer double-faulted to hand the break back but, displaying a healthy disrespect for reputations, carved out another breakpoint at 2-2, only to be wrong-footed by a superb Nadal backhand winner.

From that point on Nadal assumed control, battering huge spinning forehands that reared up off the clay.

To his credit, Marterer stuck to his gameplan and when Nadal sprayed a wild forehand wide he grabbed a 3-1 lead in the third.

Nadal responded by whipping a glorious forehand down the line at the start of the next game, on his way to breaking back.

Marterer continued to hang tough and forced Nadal into a tiebreak but his big stage debut, and invaluable lesson in claycourt tennis, ended when he hit a backhand long.

The telecommunications race is on and a winner is emerging

Health ministry investigates doctor in response to accusations of cover-up