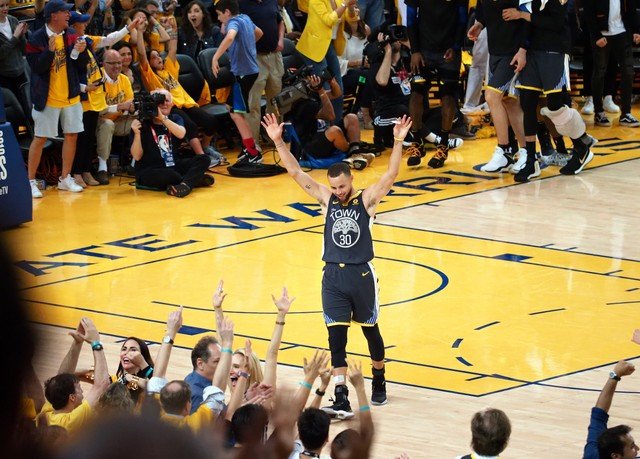 Stephen Curry broke the NBA Finals record with nine 3-pointers, accounting for a majority of his game-high 33 points

The 3-pointer can be an even more powerful weapon than the layup.

Stephen Curry broke the NBA Finals record with nine 3-pointers, accounting for a majority of his game-high 33 points and leading the Warriors to a second straight win over the Cavaliers, 122-103.

The defending champions are up 2-0 in the series as they chase their third title in four years, but the scene in the best-of-seven now shifts to Cleveland for Games 3 and 4 on Wednesday and Friday, respectively.

“He was tremendous,” Warriors coach Steve Kerr said of Curry, who led the team in scoring for the second game in a row after never having done so in last year’s Finals against the Cavaliers. “Nine (3-pointers) and seemed to hit the big shot every time we needed one. Yeah, he was fantastic.”

James said of Curry, “Every shot that he takes that goes in, he has the business of making them. That’s what he does. So shouldn’t be surprised or deflated at it. Take the ball out, move it forward, and try to execute on the other end.”

Coming off a personal-best 51 points in a Game 1 loss, James led the Cavaliers with 29 points, but he went more than 12 consecutive minutes in the first half without a field goal, during which Golden State took the lead for good.

The Warriors made their first seven shots in the game, and they sank 59.5 percent from the floor while running up a 59-46 halftime advantage.

“You can’t start the game like that,” Cavaliers coach Tyronn Lue said of his team’s defensive effort. “I don’t think we started the game like we needed to start. I think not being physical enough.”

“That’s a pretty cool deal to accomplish, knowing who has held the record for, what is it, six, eight years?” Curry said. “But at the end of the day, it’s all about trying to get a win and doing whatever you can to make that happen.

“I always say, if we focus on that, good things happen individually all across the board. So I never woke up and was like, ‘All right, let’s go get nine threes and get the record.’ It was more so about playing the game the right way, having good intentions out there on the court and good things happen. So pretty special night, and hopefully some more special things happen and we get two more wins.”

Curry had three of his nine treys in the second quarter, during which the Warriors outscored the Cavaliers 27-18 to build a 13-point halftime cushion.

The Warriors switched defensive ace Draymond Green onto James to start the second quarter, and the ploy worked. James went from the 2:22 mark of the first quarter to the 2:16 mark of the second without a field goal.

“Not just Draymond,” Kerr said of a defense that limited the Cavaliers to 41.1 percent shooting on the night. “We just played a more intense game than we did in Game 1.”

With James turning his attention more to ball distribution than shooting, the Cavaliers hung within five late in the third quarter before Klay Thompson and David West hit 3-pointers to help re-establish a double-digit lead.

The Cavaliers were never closer than seven in the final period.

“I was very proud of our guys, the way we competed in that third quarter, because we could have let go of the rope down 13,” Lue said. “We kind of saw some things offensively that worked, so we have to continue to keep capitalizing on that.”

With Kevin Durant (team-high nine rebounds) and Green (eight) also contributing to the total, the Warriors lost the battle of the boards just 42-41 one game after getting outrebounded by 15.

Durant had 26 points and seven assists as part of a balanced attack for Golden State, which has beaten Cleveland three years in a row in Game 2 of the Finals.

Thompson, who was a game-time decision due to an ankle injury, contributed 20 points in 34 minutes.

“(I was) on the training table for, it felt like, three straight days,” Thompson said. “That’s something I’m not used to. But at this point in the season, any means necessary. And the ankle feels great.”

JaVale McGee (12 points) and Shaun Livingston (10) gave the Warriors a surprise boost, hitting all 11 of their shots.

Golden State made 57.3 percent of its shots in the game.

James shot 10 of 20 from the floor. He also compiled a game-high 13 assists and missed a triple-double by one rebound, recording nine.

Regarding his increased emphasis on passing, James said, “I think I only got tired once tonight. So I mean, they doubled me a few times when I caught the ball in the post, something they didn’t do in Game 1, so I got off the ball, trusted my teammates.”

“He was very comfortable in Game 1,” Kerr said of James, who last week became the first player since Michael Jordan in 1993 to top 50 points in a Finals game. “I thought we at least made him somewhat uncomfortable at times.

“You’ve got to know he’s going to end up with 30 points and a triple-double and all that stuff because he’s that good. But we just made things a little more difficult for him tonight.”

Kevin Love also had a double-double with 22 points and a game-high 10 rebounds for the Cavaliers, who have lost nine of their last 10 meetings with the Warriors. George Hill added 15 points and Tristan Thompson 11.

Durant insisted the Warriors won’t let down as they head to Cleveland.

“We’ve got to come out with a sense of urgency to start (Game 3),” Durant said. “They’ve only lost one (home playoff) game, so they’re very confident there. We’ve just got to come out, stick to our game plan, keep playing hard and we’ll be fine.”