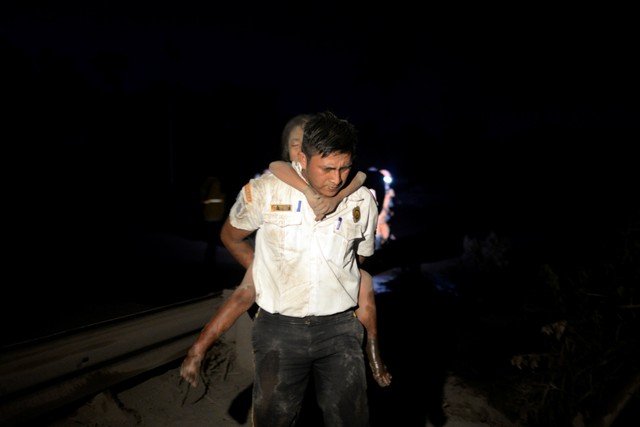 An estimated 25 people, including at least three children, were killed and nearly 300 injured on Sunday in the most violent eruption of Guatemala’s Fuego volcano in more than four decades, officials said.

Volcan de Fuego, whose name means “Volcano of Fire”, spewed an 8-kilometer (5-mile) stream of red hot lava and belched a thick plume of black smoke and ash that rained onto the capital and other regions.

The charred bodies of victims laid on the steaming, ashen remnants of a pyroclastic flow as rescuers attended to badly injured victims in the aftermath of the eruption.

“It’s a river of lava that overflowed its banks and affected the El Rodeo village. There are injured, burned and dead people,” Sergio Cabanas, the general secretary of Guatemala’s CONRED national disaster management agency, said on radio.

CONRED said the number of dead had risen to 25, from an earlier estimate of seven, including a CONRED employee. Some 3,100 people have been evacuated from the area.

Officials said the dead were so far all concentrated in three towns: El Rodeo, Alotenango and San Miguel los Lotes.

Rescue operations were suspended until 5:00 A.M. (1100 GMT) due to dangerous conditions and inclement weather, said Cecilio Chacaj, a spokesman for the municipal firefighters department.

Dozens of videos appeared on social media and Guatemalan TV showing the extent of the devastation.

One video published by news outlet Telediario, purportedly taken in the El Rodeo village, showed three bodies strewn atop the remnants of the flow as rescuers arrived to attend to an elderly man caked from head to toe in ash and mud.

“Unfortunately El Rodeo was buried and we haven’t been able to reach the La Libertad village because of the lava and maybe there are people that died there too,” said CONRED’s Cabanas.

“I THINK THEY WERE BURIED’

In another video, a visibly exhausted woman, her face blackened from ash, said she had narrowly escaped as lava poured through corn fields.

“Not everyone escaped, I think they were buried,” Consuelo Hernandez told news outlet Diario de Centroamerica.

Steaming lava flowed down the streets of a village as emergency crews entered homes in search of trapped residents, another video on a different media outlet showed.

President Jimmy Morales said he had convened his ministers and was considering declaring a state of emergency in the departments of Chimaltenango, Escuintla and Sacatepequez.

The eruption forced Guatemala City’s La Aurora international airport to shut down its only runway due to the presence of volcanic ash and to guarantee passenger and aircraft safety, Guatemala’s civil aviation authority said on Twitter.

The volcano is some 25 miles (40 km) southwest of the capital, Guatemala City, and is close to the colonial city of Antigua, which is popular with tourists and is known for its coffee plantations.

Workers and guests were evacuated from La Reunion golf club near Antigua as a black cloud of ash rose from just beyond the club’s limits. The lava river was running on the other side of the volcano.

Officials said the volcanic eruption still presented a danger and could cause more mud and pyroclastic flows.

“Temperatures in the pyroclastic flow can exceed 700 degrees (Celsius) and volcanic ash can rain down on a 15-km (9-mile) radius. That could cause more mud flows and nearby rivers to burst their banks,” said Eddy Sanchez, director of Guatemala’s seismological, volcanic and meteorological institute.

The huge plumes of smoke that could be seen from various parts of the country and the ash that fell in four of Guatemala’s departments caused alarm among residents.

David de Leon, a CONRED spokesman, said a change in wind was to blame for the volcanic ash falling on parts of the capital.