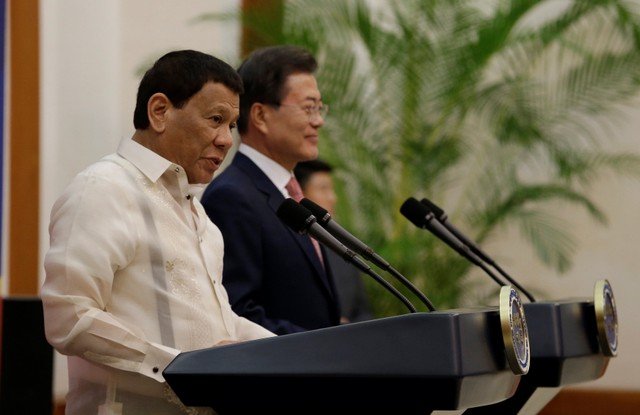 Philippine President Rodrigo Duterte, speaks after a meeting with South Korean President Moon Jae-in, during a meeting at the presidential Blue House in Seoul

A kiss by Philippine President Rodrigo Duterte on a Filipino woman’s lips while on an official visit in South Korea sparked anger and jokes on Monday, as feminists denounced what they called his “perverted way” of taunting his female critics.

Many Filipinos, however, thought it was a harmless kiss intended to be fun.

The 73-year-old Duterte, whose critics have labelled him a misogynist and say his comments are derogatory and demeaning towards women, dismissed the kiss as just a “gimmick” to entertain supporters at a meet-and-greet event in Seoul.

Social media was abuzz with photos and videos of Duterte on stage before a crowd of Filipinos on Sunday night, when he asked an unidentified audience member to kiss him in exchange for a book he was handing out.

The woman, who admitted she is married and appeared excited to see Duterte in person, agreed.

Duterte then told the cheering crowd of about 3,000: “Don’t take it seriously. It’s just for fun, a gimmick.”

State-run Philippine News Agency identified the woman as Bea Kim and posted a brief video interview with her on its Facebook page.

Duterte’s controversial remarks about women include numerous jokes about rape and have incensed activists and foreigners, most notably, Chelsea Clinton, the daughter of former US President Bill Clinton. But none have dented the hugely popular leader’s domestic support.

Women’s rights advocates in the Philippines recently launched an online #BabaeAko (I Am A Woman) campaign to send a message that they were not taking Duterte’s “sexist” statements sitting down.

“You don’t have to kiss that woman if you want to entertain people,” said Joms Salvador, secretary-general of Gabriela Women’s Party.

“The fact that you thought that kissing the woman would entertain people…that’s something really sick.”

Opposition Senator Risa Hontiveros said that even though the kiss was consensual, it was a “grave abuse of authority”.

Anna Pinili, a churchgoer who considers herself a devout catholic, said Duterte had good intentions, but could have handled it better.

“He should have kissed her on the cheeks instead,” she said.

Father of two Raymond Pascual said people were making too much of a deal of it, and he thought it was just a “simple kiss”.

Making the rounds also on social media was a spoof photo of the same kiss, but with the woman replaced by superimposed image of China’s President Xi Jinping, in an attempt to poke fun at Duterte’s high regard for his Chinese counterpart.

Chinese language lessons on the way