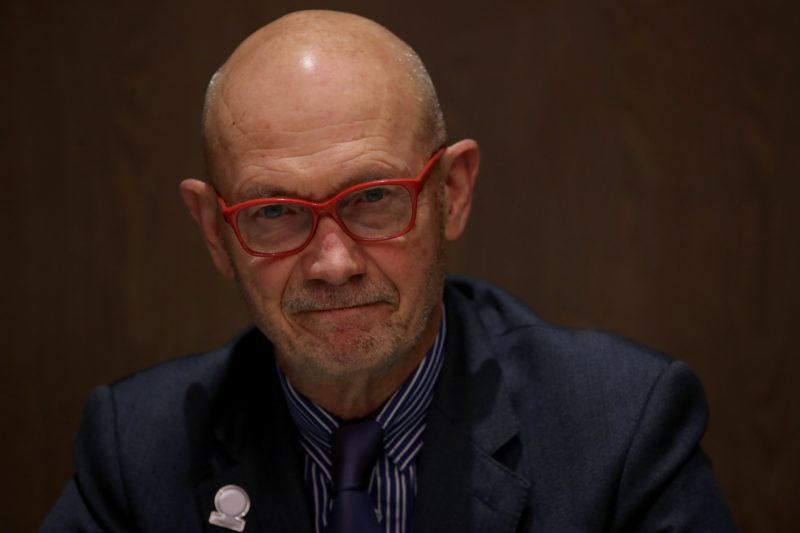 The former director-general of the World Trade Organisation (WTO) Pascal Lamy said that while the decision of US President Donald Trump to slap a 25 per cent tariff on steel and aluminium imports is one of his “weird initiatives,” it also constitutes a chance to redesign global trade rules.

At the same time, it is also a chance for Europe to reinvent itself and so tackle the rising anti-globalisation sentiment which in turn also threatens European integration, said Lamy who was addressing an audience at the annual lecture of the Cyprus Economic Society in Nicosia on Friday on “Harnessing Globalisation”. At the same time, Europe should avoid overreacting to Trump’s decision announced the day before and instead opt for a reaction compatible with its “multilateral rules-based DNA”.

“It can only be a joke, but it is a terrible joke thinking that the president of the US can see things this way,” Lamy said in reference to a perceived risk to national security with which the US justified the tariffs which angered major partners and allies including the EU, Canada and Mexico.

Lamy, who served as EU trade commissioner from 1999 to 2004 under Romano Prodi before switching to the WTO in 2005, said that he disagreed with those arguing that China was violating global rules on trade.

Any such violations would result in the Asian country being reported to the dispute settlement body of the organisation, Lamy continued. On the other hand, rules of the game, have not adjusted to the new realities and especially in the areas in which China should be more disciplined like in subsidisation and public procurements.

The Frenchman said that following the global financial crisis a decade ago, one can have “serious doubts” about what he had learned at the beginning of his career that politics and economics “went hand in hand,” with political freedom leading to more prosperity and economic freedom resulting in more political freedom.

“Trump, Brexit, Erdogan, Putin, Xi Jinping are all symptoms of what can be interpreted as a return to nationalism, illiberalism and sometimes even protectionism,” he said. “While the world economy is doing reasonably well, at least much better than in the last ten years, the geopolitical risks are increasing. In a nutshell, economics and politics are diverging”.

While globalisation, defined as the intensification of international exchange, was getting stronger over the past decade driven mainly by technological progress reducing transportation costs and aided by trade encouraging policies, the capacity to harness it, “the capacity to buffer, to amortise the socio-economic impact of that has become weakened,” he said.

As a result of the weaker capacity of western democracies to govern and manage globalisation and deal with its socio-economic impact, amid challenges related to the evolution of demographics and immigration, the anti-globalisation sentiment has fuelled far-right extremism who promises to turn back the clocks, Lamy continued. Addressing challenges of globalisation at local level is possible with local level policies such as well-designed welfare systems.

Besides, as the globalisation process is irreversible, the solution is rebalancing it to keep democracy “resilient (and) strong,” he continued.

Overhauling the rules of globalisation will require resorting to components of the Peace Treaty of Westphalia, which in 1648 ended the Thirty-Years’ War which pitted the Habsburg dynasty and its Catholic allies against France and the Protestant kingdoms and states as well as the Eighty-Years’ war which led to the establishment of the Netherlands and introduced the idea of the sovereign state, Lamy said.

Setting up a regime similar to that of the Peace of Westphalia is a “complex, frustrating, (and) very slow process,” based on multilateralism, which the Trump administration rejects, he continued. “Their basic stance is that this multilateralism doesn’t work and if it works, it doesn’t work for the US so let’s get rid of that and go back to where we can exert our influence which is bilateral relations”.

At the same time, one cannot expect that Trump’s ideas on trade would one day go away, like bad weather is followed by sunshine, the former WTO chairman continued and added that Europe could seek the creation of coalitions of states, cities and non-governmental organisations (NGOs) which, like in the case of the Paris Agreement on climate change three years ago, showed that it is “a direction that can be considered”.

“These coalitions can be more efficient because they are more legitimate,” he said.

Salah in World Cup squad, but will take a while to recover