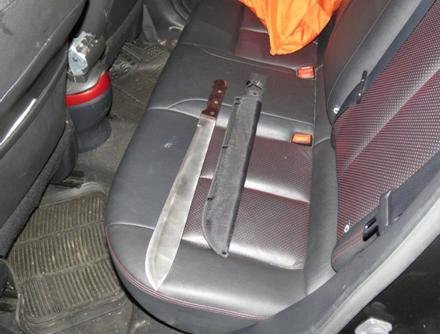 A bladed weapon lies on the back seat of a car near to which Isaac Marshall, Micah Bedeau and Yonas Girma were arrested, is seen in an undated photograph released by the Metropolitan Police

Five London gang members who made drill music, a niche form of hip-hop that glorifies violence and has been linked by the authorities to a surge in knife crime in the city, were due to be sentenced on Thursday.

The five young men, aged between 17 and 21 years old, were convicted in May of conspiracy to commit violent disorder after they were arrested in November last year armed with machetes, baseball bats, masks, balaclavas and gloves.

Police said the group, members of a gang based in the Notting Hill area of west London, were on their way at the time of their arrest to attack a rival gang.

Kingston Crown Court was shown seven drill music videos which showed how the group had been promoting violence, according to prosecutors who have asked the court to impose “criminal behaviour orders” that would ban the men from making that type of music.

One song called ‘No Hook’ included sounds of gunshots and lyrics about shooting and stabbing such as “Ching (stab) Splash (stab) aim for his lungs”, police said.

“We are very clear we will take decisive action to get videos of this nature removed from the internet,” said Detective Superintendent Adam Lowe of the Metropolitan Police.

“Despite what the gangs may claim, there is a clear link, as in this case, to violence,” he said.

The authorities in London have been struggling to come to grips with an increase in knife crime that saw London’s murder rate overtake that of New York in February and March, for the first time in modern history.

Some youth workers have disputed the link between drill music and gang violence, pointing to cuts to youth services due to government fiscal austerity measures as a more substantive reason for the increase in knife crime.

Police gave annotated excerpts from the lyrics of ‘No Hook’:

“Clock me an opp (opposing gang member), wind down the window, back (get) out the spinner (revolver firearm) and burst (shoot) him.”

“I put bullets in numerous guys like how come the opps ain’t learning?”

The criminal behaviour orders being sought would also prevent the gang members from entering certain areas, wearing face coverings such as bandanas in public places, and displaying gang-related hand gestures.

Sentencing was due to start later on Thursday.