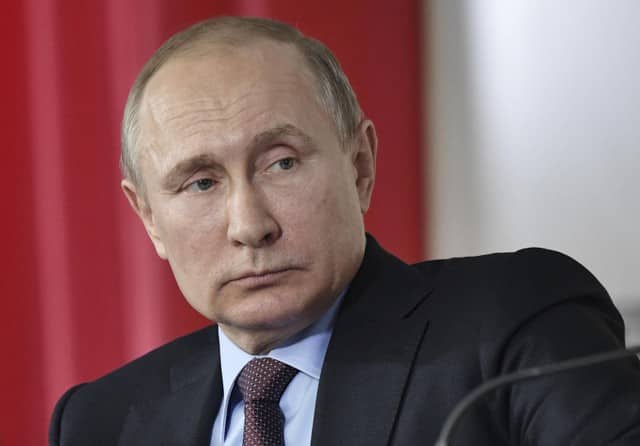 Russian President Vladimir Putin said on Thursday that he had warned European countries years ago about the risk of the United States imposing its rules on others, and that they were now paying the price for ignoring him.

Speaking during a live television phone-in with the Russian people that lasted over four hours, Putin likened the tariffs that Washington imposed last week on steel and aluminium imports from Canada, Mexico and the European Union to economic sanctions.

“It appears our partners thought that this would never affect them, this counterproductive politics of restrictions and sanctions. But now we are seeing that this is happening.”

The president said he had warned in a speech in Munich in 2007 about a growing U.S. sense of exceptionalism and the risk of it imposing its own rules on other countries.

“That is exactly what is happening now. Nobody wanted to listen, and nobody did anything to stop this from developing. Well, there you go, you’ve been hit. Dinner is served … please sit down and eat.”

Putin also accused the United States of upsetting the strategic nuclear balance, and said nobody should take any hasty steps: “The understanding that a third world war could be the end of civilisation should restrain us.”

He put neighbouring Ukraine on notice that if it tried to make any military moves against pro-Russian separatists in eastern Ukraine while Russia hosted the soccer World Cup this summer, Ukraine would suffer:

“I hope that there won’t be any provocations, but if it happens I think it would have very serious consequences for Ukrainian statehood in general.”

Putin also said Russian forces would stay in Syria for as long as it was in Russia’s interest.

Putin, who easily won re-election in March, has since 2001 used the annual phone-in to cast himself as a decisive troubleshooter on the home front and a staunch defender of Russia’s interests on the world stage.

Critics say the event, being held a week before the World Cup starts, is a stage-managed piece of theatre designed to let Russians let off steam and fleetingly feel as if they can influence a bureaucratic, top-down system. Putin, 65, and his aides say it is an indispensable tool to gauge public sentiment and learn about people’s real problems.

Kremlin-watchers often liken his performance, which this year spanned almost 80 questions, to that of a tsar listening to his petitioners as he promises to fix individuals’ problems.

On Thursday, he granted Russian citizenship to a Ukrainian woman who lost a hand and leg when her home in Syria was bombed, scrapped a tax on air tickets between Moscow and Russia’s Far East, pledged action to reduce petrol prices, and said he would look into a woman’s complaints about her ramshackle home.

Putin had another “I told you so” message for Russian businessmen, saying he had previously warned them about the risks of keeping their assets abroad, and that they were now being persecuted by countries such as Britain.

Putin had been asked about the visa problems being experienced by billionaire Roman Abramovich in Britain.

“I warned them that this situation, which we see today, could develop. I … recommended at the time that our business keep its capital in Russia, in the motherland,” said Putin.

“Who is going to help them abroad? They are just persecuted there. Conditions are created to make their work impossible.”

At the start of a new presidential term and on a drive to improve living standards, Putin also used the event to try to reassure Russians about the economy.

“Overall, we are heading in the right direction,” he said. “We have started on the trajectory towards robust economic growth in Russia. Yes, this growth is modest, small, but it is also not a fall.”

The Russian central bank forecasts economic growth at between 1.5 and 2 percent this year.

This year, Putin dispensed with his usual studio audience, fielding questions asked by text message and video. He referred some questions to regional governors, government ministers and state company heads who were shown on giant TV monitors sitting at their desks across Russia, waiting to be quizzed.

Members of the public submitted over 2.5 million questions, state TV reported, some of them flashed up on a giant screen close to Putin.

Some of those questions, which Putin did not attempt to answer, were politically awkward.

One asked why opposition leader Alexei Navalny had not been allowed to register as a candidate in the presidential election, another why there was money for the military but not ordinary people, and another asked whether Russia was a banana republic.

“Life is getting worse and worse,” read another. “It’s in the Kremlin where everything is wonderful.”

Cyprus in race against time to reduce NPLs