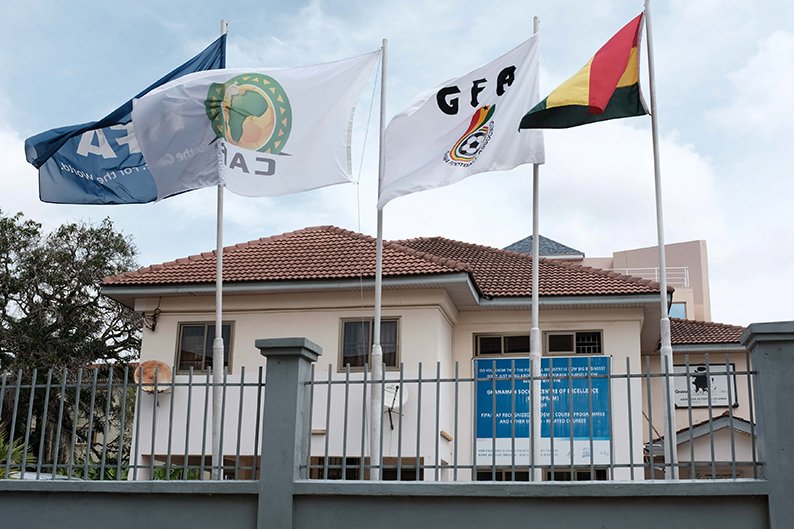 Flags flutter next to the premises of Ghana Football Association in Accra, Ghana

Ghana football boss Kwesi Nyantakyi, a member of FIFA’s decision-making Council, is under investigation for possible ethics violations and has been provisionally suspended for 90 days, the global soccer body said on Friday.

The ban was imposed one day after the Ghanaian government dissolved the country’s football association (GFA) after officials, including Nyantakyi, were shown in a documentary allegedly taking kickbacks.

Nyantakyi has not replied to multiple requests for comment while the GFA has said it would cooperate with any investigation.

Nyantakyi, who has been GFA president since 2005 and was elected to the FIFA Council in September 2016, was filmed in a hotel room appearing to take a $65,000 bribe from a supposed businessman seeking to sponsor the Ghanaian football league.

Information Minister Mustapha Abdul-Hamid said in a statement on Thursday that the government was shocked and outraged at the contents of the documentary and would refer the alleged culprits to the police for investigation.

FIFA has not yet commented on whether any action will be taken over the GFA’s dissolution.

The global soccer body does not accept any third party, including government, interference in its member associations.

It could respond by suspending Ghana’s membership, which would mean the country’s national teams could no longer compete in international competition. Ghana missed out on the World Cup which starts in Russia on June 14.