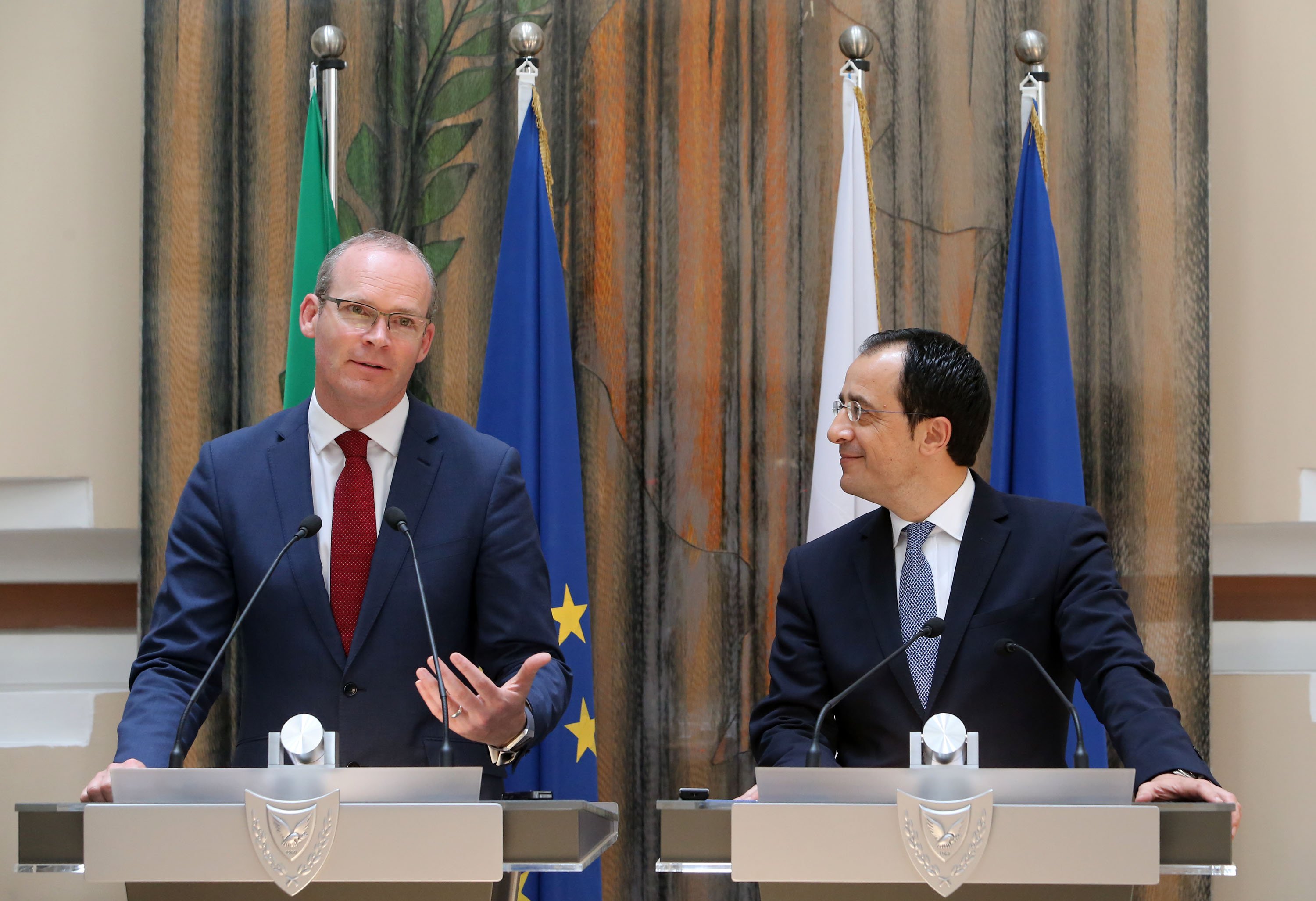 Ireland will support Cyprus in any way it can to try and find a way forward with negotiations, Tánaiste and Minister of Foreign Affairs and Trade for Ireland Simon Coveney said on Friday.

In joint statements after talks with his Cypriot counterpart Nicos Christodoulides in Nicosia, Coveney said even though Cyprus and Ireland were on different extremities of Europe, they had a lot in common.

Coveney referred to the fact that there were a lot of Irish people working in the region including Irish UN peacekeepers in southern Lebanon, and Irish police officers serving with Unpol in Cyprus. He also referred to the direct flights now operating between the two countries with Irish airline Ryanair and Cypriot airline Cobalt.

“So, I think there is a lot more for us to do together, to build on what is already a very warm and positive bilateral relationship,” he said.

“In a post-Brexit scenario, you will see Ireland and Cyprus working even more closely together in many ways,” he said.

“Both of us have a similar approach to Brexit, we want to see Britain as close as possible to the EU in the future. Of course, Britain is our neighbour but it also has a very special relationship with Cyprus.”

Referring to the Cyprus issue, he said: “We want to be helpful. We are trying to be and we will support you in any way that we can to try and find the way forward that I think everybody wants to see.”

In his comments, Christodoulides said the two men had reviewed bilateral relations and ways to strengthen them particularly in the fields of trade, investments, higher education and tourism, “as well as through enhancing our regular consultations on different levels both bilaterally as well as in the EU and other international fora.”

“We also discussed issues of common concern including the situation in Syria, the Middle East peace process and we exchanged ideas on how we could work together to promote peace and strengthen stability in the wider region,” he added.

“I am convinced that there is scope for undertaking joint action to this effect,” he stressed.

On Brexit, Christodoulides said he had listened with interest to Coveney on the major implications that Brexit would have on Ireland “given the extremely close links between the two countries,” he said. “We stand fully in solidarity with Ireland on this very sensitive issue,” he added.

Christodoulides said he had briefed his Irish counterpart on the latest developments on the Cyprus issue and the island’s exclusive economic zone as regards energy plans.

“Let me take the opportunity to publicly express our gratitude for Ireland’s solid and steadfast support in our aims,” he said. “Our appreciation to Ireland which on countless occasions has shown its solidarity with the people of Cyprus in many ways and in difficult times.”

He particularly expressed Cyprus’s gratitude to the thousands of Irish soldiers who had served in Unficyp from 1964 to 2005, as well as the Irish police officers who have been serving on the island Cyprus since 1993.

News podcast: including women in the peace process