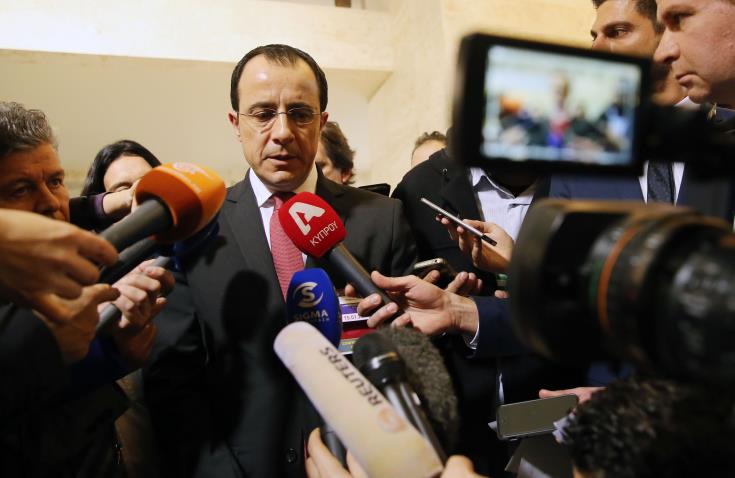 Foreign Minister Nicos Christodoulides said on Saturday he would take the initiative to find a solution after his ministry sent out a note verbale to foreign embassies in Cyprus regarding visits to ancient sites in the north, which reports said sparked anger among the diplomatic community.

A note verbale is a diplomatic letter prepared in the third person and unsigned, usually to protest something. The one in question was issued by Christodoulides own ministry but on Saturday he said he would resolve it.

Politis reported on Saturday that the note verbale was sent to the foreign embassies in Cyprus at the request of the antiquities department, regarding visits to sites in the north.  It said the note was issued on June 4 along with letters from the antiquities department. The missive reminded embassies that only the latter had the authority over monuments and sites in the north as the competent authority of the Republic of Cyprus.

“The ministry of foreign affairs takes this opportunity in order to reiterate its position pertaining to the illegal use of monuments and archaeological sites.”

It then cites UN Security Council resolutions relating to the sovereignty of Cyprus and non-recognition of the Turkish Cypriot breakaway state in the north.

A letter from the antiquities department was attached to the note verbale, which stated that illegal events were being held at monuments and archaeological sites, Politis said.  A senior official at the department told the newspaper that the department filed this report with the ministry, as they regularly do.  Asked by the daily which events they were referring to, the official, the paper said,  asked for more time to respond adequately.

The missive caused anger from some of the recipients, Politis said.  Specifically, the EU Representation in Cyprus, which has an information office in the north, said that the note was against the EU itself.  It said that the EU funds the maintenance of sites in Cyprus in the north, such as the Othello tower in Famagusta.

Politis reported that the note verbale sent to ambassadors was the second, with the first having been sent on October 30, 2017.  At that time, an ambassador from a European country had said that they were obliged to visit the sites, so they can inform their home governments on the funds used to maintain them.

Following the outcry from diplomats, Christodoulides said he would undertake the initiative to find a solution.  “There is a state law in place, which was made after 1974, with a goal of dealing with the issues regarding the destruction of cultural heritage,” he said.

He added that there was an irregular state of affairs caused by the occupation, which necessitated the restoration of cultural heritage.  Christodoulides said the government was taking the appropriate steps in that direction.

“Taking into account the facts… I can tell you that I have already informed some that I am taking the initiative to find the appropriate solution,” he said.  Politis later on Saturday reported that the note verbal had been sent by a ministry official without the minister’s knowledge.

Tensions high at G7 after Trump ‘rant’ over trade