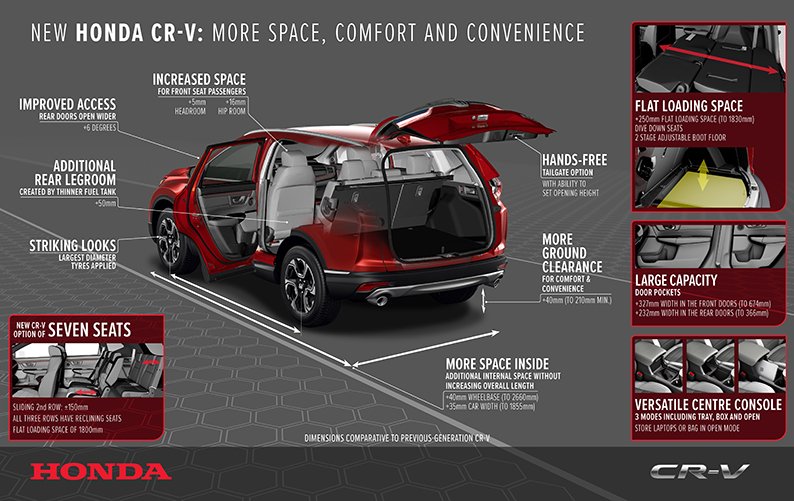 SINCE the launch of the original CR-V in 1995, the model has been recognised in the SUV sector for its space efficiency. The all-new model, which has been on sale in the USA for a while and was revealed at the Geneva Motor Show, will be available in European spec later this year, and builds on its heritage to deliver what the manufacturer claims is “the most practical and comfortable CR-V yet”.

Honda’s engineers heavily revised the vehicle’s platform: the wheels were repositioned further towards the corners of the car, increasing the length of the wheelbase by 40mm, and ground clearance was improved by 40mm, for what Honda calls ‘true off-road potential’. This change to the wheelbase, along with an increase in vehicle width of 35mm, has unlocked further space for occupants while retaining the same overall length.

Inside, this extra space has been put to good use. Front passengers benefit from a 5mm increase in headroom and 16mm more hip room. The tandem distance between front and rear passengers is further improved by 50mm, while a thinner fuel tank positioned ahead of the rear wheels improves rear legroom by 50mm.

The opening angle of the rear doors has increased by 6 degrees, which, combined with the increases in occupancy space provide easy entry and exit for passengers, and improved access for the fitting of child seats. A further highlight is the new ‘wrap around’ lower door sill, minimising the likelihood of getting dirt on clothes when passenger exit the vehicle.

For the first time, petrol models are available with the option of seven seats, in which all three seat rows have reclining seats, to “ensure long-distance comfort for all passengers”. Second-row seats slide back and forth by 150mm on the seven-seater, to create a large entry aperture and a comfortable seating position in the back, even for adults. The third row seatbacks fold down and tumble forwards to provide a larger boot capacity when not required.

Boot capacity is class leading, with the biggest ever loading bay ‘footprint’ in a CR-V. New single-action ‘dive down’ 60:40 split-fold seatbacks, combined with a two-stage adjustable cargo floor can enable faster, easier loading and a completely flat surface for larger items right through to the second row seats when the cargo floor is in the upper position. These improvements have created a load space with a maximum loading length of 1,830mm on the five-seater (or 1800mm on the seven-seater) – big enough to accommodate a 19.5-inch frame mountain bike. Another option for owners is to adjust the cargo floor into the lower position to provide a deeper rear boot space.

The car also boasts a host of convenience and technology features: occupants in the front and rear can make use of extra-large capacity door pockets, enabled by moving the speakers further up in the door panels. These are large enough to fit a full-sized tablet device. In the front, a new three-mode centre console adapts to a variety of requirements including a tray for a smart phone, or a space big enough for a small handbag. Starting from the Elegance trim, twin USB ports are available in the rear, providing charging points for phones, tablets and other personal electronic devices. Executive grades also benefit from a hands-free tailgate, complete with the ability to set the opening height for use in confined spaces.

The traditional rev-counter and speedometer dials are replaced by a seven-inch screen, with another seven-inch ‘infotainment’ touchscreen on the dashboard.

First deliveries of the all-new Honda CR-V in Europe are expected in the autumn, with a 1.5-litre VTEC TURBO petrol engine available from launch and a five-seater hybrid model following early in 2019. Honda promises that the fuel economy on the petrol variant will be class-leading, although it hasn’t yet revealed the figures.

The 1.5 VTEC variant can be paired with a six-speed manual gearbox or the option of a CVT automatic transmission. Both versions are front-wheel drive as standard, but four-wheel drive will be offered as an option.

Honda calls the new hybrid system Intelligent Multi Mode Drive (i-MMD). It comprises a 2.0-litre four-cylinder petrol engine and two electric motors and rather than feeding its power via a conventional gearbox, the i-MMD system makes use of a compact single fixed gear ratio ‘in a bid to reduce cost, weight and complexity’.

Prices are expected nearer to the launch date.

Burglary and car theft in Paphos

Irish tourist, 19, found dead, may have fallen from balcony

A minute with Anastasia Uvarova, Physiotherapist