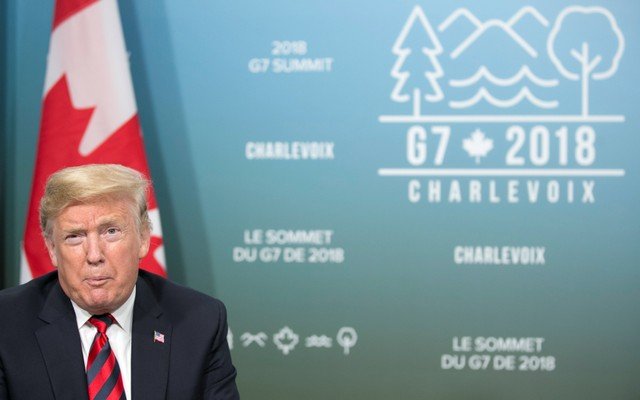 IN FEBRUARY 2017, writing in these pages, I suggested that President Donald Trump should act like a president. His presidency, I argued, is based on a loose script which considers the world as a big reality show where confusion, contradiction, authoritarianism, vulgarity, foul language, coerciveness, intimidation and overblown egos are the chosen tools to govern and dictate on others. Now, nearly seventeen months into his presidency, he has become even more reckless.

I will not list his many actions and policies which have added oil to the fire of national and international relations. Rather, I will comment on his determination to start a trade war; and how this short-sighted policy of putting ‘America first’ and ‘making America great again’ may backfire by exacerbating international tensions; amplifying social divisions; and adding to the risk of  turning such tensions into a serious world conflict.

President Trump acts as someone who sits on a pile of gunpowder and wants persistently and stubbornly to test whether the flint stones he is playing with can spark an explosion.

Following months of speculation and confusion about the Trump administration’s intentions regarding import tariffs, US Commerce Secretary, Wilbur Ross, informed the world that the US would proceed to impose tariffs on imported goods including steel and aluminium. The G7 reacted with anger and disbelief.

The European Union, Canada, China, Japan and Mexico expressed dismay. They responded with a string of reprisals and counter measures coupled with legal challenges at the World Trade Organisation (WTO) about the legitimacy of the US action.

As usual, the prime motivator of this charade, the President himself, on March 2, 2018, tweeted: “When a country (USA) is losing many billions of dollars on trade with virtually every country it does business with, trade wars are good, and easy to win. Example, when we are down $100 million with a certain country and they get cute, don’t trade anymore-we win big. It’s easy!”

What exactly President Trump and some of his more hawkish advisers understand of a “trade war” is a moot point.  What is at stake is that a trade war is not just about economics and who makes profits or losses.  Economics, even in its crudest form, is about people.  It is market relationships which are essentially social relationships whose ramifications have social consequences.

Although tensions, conflicts and wars arise out of many complex and often interdependent reasons, historically there has always been an economic cause for such frictions. Trade and trade relations bring countries together and promote peaceful competition between similar and diverse political and socio-economic systems. As long as rules and expectations guiding those commercial entreprises are adhered to by all the participants, trade and commerce have a pacifying effect on relations. Trade makes states reciprocally dependent and the principles of supply and demand for goods and services provide for their mutual needs.  The competition for gain arising from trade between countries and the threat of unpredictable and escalating frictions

are cushioned somewhat by the economic interdependence and exchange of goods and services generated in a free but regulated market.

However, whilst globalisation and regulation of trade by the WTO may promote peaceful means of engagement between countries, they can also promote conflict by increasing inequalities between and within countries.  In other words, whilst extensive economic interdependence may increase cooperation between them, by the same token the very interdependent nature of the relationship may increase the likelihood of countries falling foul of each other on the basis of a real or perceived unequal treatment. It is this perception of ‘inequality’ in sharing the trade pie and of being unfairly treated by others (friends or foes) that has led the Trump administration to fall back on protectionism.

But once states choose to unilaterally flout the rules and tear up trade agreements in the pursuance of protectionist policies as part of the claim of putting their countries “first”, others follow suit and retaliate in kind.

This tit-for-tat situation does not just lead to upheaval in the market and economic relations but invariably leads to a parallel strain in social relations between countries.

Historically, a combination of trade wars together with political and economic instability played a major part in escalating friction between countries and leading to minor or major conflicts.

The economic interdependence between European nations in the early 20th century and its subsequent fragmentation due to expansionist policies followed by a sharp competition for expansionist practices created the fertile climate for the outbreak of the First World War.  The economic protectionist policies of the 1930s in the context of an escalating economic depression; the competition between states for dominance; the presence of dogmatic, authoritarian and fiercely ideological leaders expressing a strong nationalist, expansionist and racist agenda for the sake of the “motherland” bred, once more, the fertile social and political environment for the outbreak of the Second World War.

The market (trade, commerce and economic relations in general), is key to understanding political situations and outcomes. States find themselves at odds with each other as a result of cracks in market relations which can easily escalate into direct confrontations between them.

Whether this confrontation and escalating competition for “winning” the trade war finally leads to war or some other serious armed conflict within or between countries depends on the broader socio-political environment; the stability and authority of governments; the effectiveness of world organisations like the WTO in resolving or negotiating differences; the global state of geopolitics; and the strength, standing, legitimacy and rational reasoning of world leaders.

The present economic, political and social environment does not meet those expectations and, thus, it is not conducive to good relations.  The world is rife with domestic, regional or by proxy international conflicts.  The Cold War is back; religious fervour and hostilities in the name of political and theological ideology abound; fierce competition for natural and essential resources like water and oil is leading to dangerously aggressive postures by various countries especially in the Mediterranean and the Middle East;  poverty, dwindling food supplies and rising inequalities; geopolitical expansionist policies and practices by various states; fierce competition for ideological supremacy between political systems (democracies versus closed systems); failing European states which find themselves in disarray; hitherto stable and reliable elected governments fast becoming minority and ineffective bodies devoid of authority and means to manage the economy and social relations within and outside in any convincing way; the rise of nationalism and extreme right-wing groups; and the rise of despotic, authoritarian and ego-laden political leaders in Europe, US, Russia, China, Turkey, Middle East, Africa and Latin America amongst others all conspire, as in the 1930s, to create the lush conditions for the germination and propagation of a new world conflict.

In this already fragmented international platform and the broader fragility of relationships, the last thing the world needs now is a trade war. President Trump will be well advised to put his ‘Ego’ on a leash and reconsider his actions with a gentle reminder that nobody is infallible.

Iran may fast be running out of options